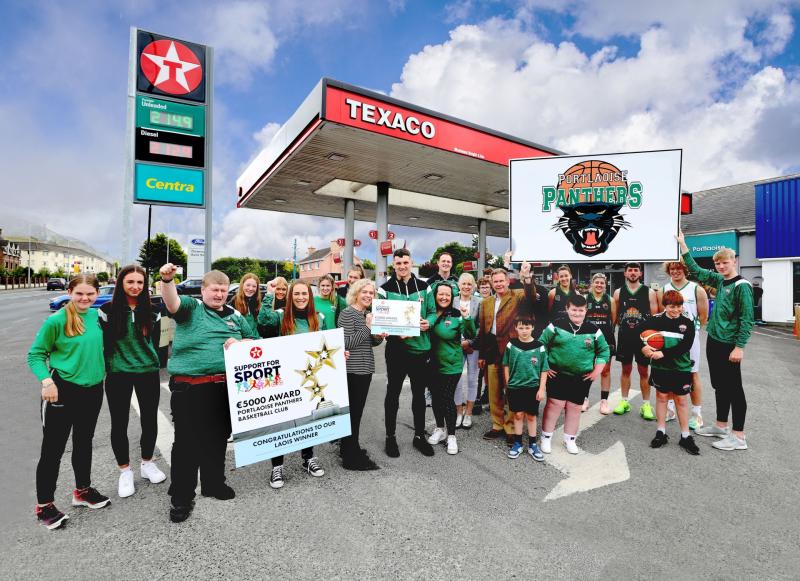 Presentation to Portlaoise Panthers at Downey’s on Portlaoise's Dublin Road.

One of the most successful sports clubs in Portlaoise and Laois has received a big boost in the shape of a €5,000 cheque.

Portlaoise Panthers Basketball Club are the Laois County winners of the recent Texaco Support for Sport initiative. The €5,000  will be used to fund its development programme and to provide equal opportunities for all members in the community.

Portlaoise Panthers Basketball Club has an expanding membership comprising some 400 players, coaches, management and volunteers. Regarded to be ‘one of the biggest clubs of its kind in the country,’ it caters for both genders of all abilities.

Under the scheme – similar to that which proved successful last year when the Laois county award was presented to Laois Cricket Club – the presentation was made to the Club by Valero Energy (Ireland) Limited, the company that markets fuel in Ireland under the Texaco brand.

Now in its second year, the Texaco Support for Sport initiative sees an annual fund of EUR130,000  set aside for allocation in equal amounts of €5,000 to successful applicants chosen on a county-by-county basis.

The official presentation of the grant Downey’s Portlaoise was a attended by Club members including the Secretary, Emma Scully, Texaco Dealer, Richard Downey and Valero Area Sales Manager, Sinéad Fox.

Entries to the Texaco Support for Sport 2023 initiative will open this Autumn.