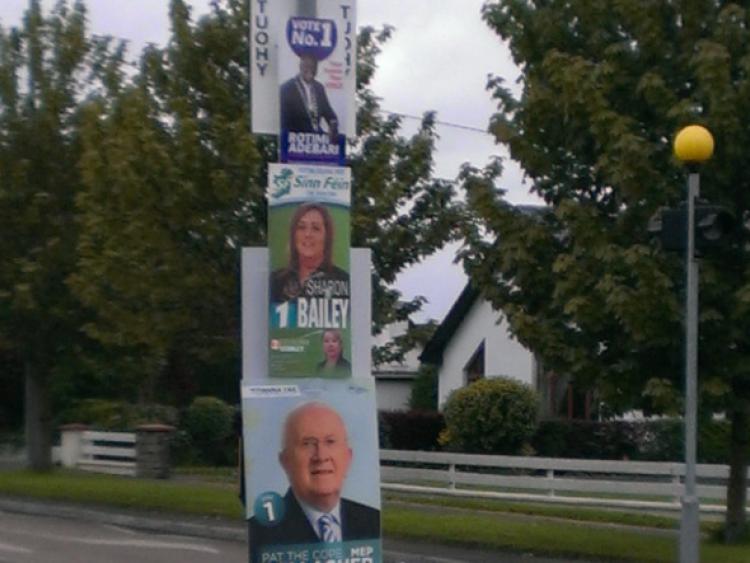 The towns, villages and countryside of Laois may be plastered with posters but local elections candidates are fuming over their removal and allege they are being stolen and vandalised.

The towns, villages and countryside of Laois may be plastered with posters but local elections candidates are fuming over their removal and allege they are being stolen and vandalised.

Candidates in Portlaoise and Portarlington contacted the Leinster Express last week to complain about incidents which have been reported to the Gardaí. The removal of some posters in Portlaoise has even caused the local parish priest to make a statement effectively apologising to candidates.

First time political candidate Gráinne Corcoran (Labour) from Portarlington said she shocked at what she claimed was a campaign to destroy and steal some of her election posters.

In Portlaoise Cllr Catherine Fitzgerald (FF) believed her posters had been “deliberately removed” in a “very unfair” campaign against her.

Some posters have been removed for what appears to be religous reasons although Portlaoise’s PP Msgr John Byrne said that the note that the theft of posters near the church was done at the request of parishioners was “absolutely spurious.”

Ms Corcoran who is standing for the Labour Party in the Portarlington to Graiguecullen area, had her face sprayed over with red paint on 13 of her election signs, while another five were removed from poles over the Easter weekend.

“Obviously someone is going out in the middle of the night with a ladder. There is no way you could steal them by standing on a car. Whoever did this has a serious problem,” said Ms Corcoran.

“Many candidates get 300 printed, but I think 100 is quite enough, I don’t think you have to have one on boths sides of the road,” she said.

She said posters had been sprayed over in Port, in Emo village, and on the Emo to Portlaoise road, also discovering five had been stolen in Portarlington. One of those was outside Mount St Anne’s retreat, where she had asked permission of the sisters to erect a poster. A day later it disappeared.

“I felt very upset on Sunday, I have always worked in my community and want to continue to work for it,” she said.

Ms Corcoran has replaced the damaged and missing signs and is determined to continue with her election campaign.

“I have a job to do and I will continue to do it. I have a great crew and family. If anything this has made me stronger,” she said.

The candidate was asked by Port Gardaí not to provide evidence to the Leinster Express as they are investigating the crime and asking anyone with information to contact them on 9623112.

Fianna Fáil candidate Cllr Catherine Fitzgerld said posters had been removed along the Ballyfin Road and in the Rathleague and Meelick areas of Portlaoise. She said a roadside hoarding her campaign team had erected and was secured with fence post was uprooted.

The outgoing town and county councillor said she had her suspicions but no proof about who was responsible and has filed a report with the gardaí. She did not believe what has happened was simply vandalism as no evidence was left of damaged posters. She also claimed that other candidates have suffered.

“It is very unfair. I have never seen it happen before,” she said.

The candidate said she was not in favour of posters and would have preferred to see a ban, but felt she had no option to use them because.

Meanwhile, Msgr Byrne wrote about the issue in the recent parish newsletter.

“I wish to make clear that whoever removed the election posters from the railing on the public footpath in front of the parish church did not do so on behalf of the Parish. We had no knowledge of this action and the note left that the theft of the posters was at the request of Portlaoise parishioners is absolutely spurious.

“I don’t know who or what the individual(s) purport to represent but it is not Portlaoise Parish. Whatever our thoughts on the proliferation of posters, candidate are entitled to place them in public areas and that should be respected. We thank God we live in a democracy and have the privilege of a vote in these elections,” concluded the priest.

Meanwhile, Conor Sweeney, son of Mary Sweeny said on twitter. “Some people obviously think local democracy in action is burning down our posters from poles. So I just hang another”.