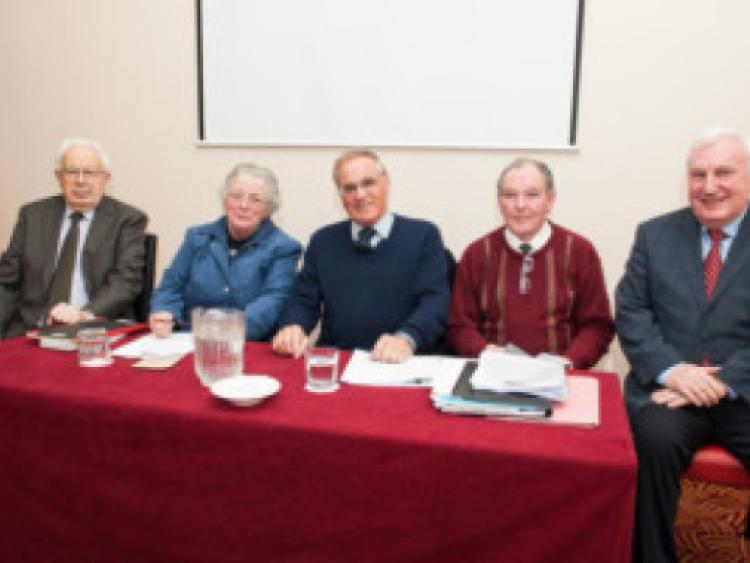 Safeguard the unique features of the old town of Maryborough. That call was made to the County Council at Laois Heritage Society AGM last Thursday night (February 5).

Safeguard the unique features of the old town of Maryborough. That call was made to the County Council at Laois Heritage Society AGM last Thursday night (February 5).

Outgoing Secretary Mary Lalor, in her annual report, said that with the impending relocation of schools, the Society was concerned about the future of the Tower Hill/Church Avenue area of Portlaoise.

In this area, she pointed out, were the Odlum’s Mill and Presentation Convent sites and the remains of the Fort of Maryborough.

She stressed: “Hopefully the local authority and the planners will ensure that all the unique features of the old town will be adequately safeguarded.”

The well-attended agm saw changes at the top table of the Society. Ms Lalor stepped down as Secretary after serving in the position for 15 years. Teddy Fennelly relinquished the Chair which, over two terms, he’d filled for almost two decades.

Both were the recipients of tributes for their work--tributes that were made tangible by the elevation of Mr Fennelly to the the post of Society President and the conferral of honorary life membership on Ms Lalor.

Jim Lalor, speaking from the floor, noted that while the Heritage Society was successful and vibrant, it had only 21 members.

Incoming Chairman Michael Parsons said a sub-committee had examined this issue and had made a number of recommendations in an effort to increase membership.

These, he revealed, included charging non-members five euros for attending Society lectures, current members inviting friends to join, more focus on local topics, reaching out to other organizations, liaise with Laois Tourism, extend links with young people, priority on web site, officers to serve no more than five years and the preparation of an overall mission or vision.

P J Tynan, making a return to the Society after a number of years, opposed the proposed charging of non-members for attending lectures--a stance in which he was supported by Col Donal O’Carroll.

Chairman Parsons, in response, said the committee would reconsider this proposal.

Earlier, he had said his predecessor, Teddy Fennelly, had taken the Heritage Society from strength to strength.

“I feel I am standing on the shoulders of a giant,” declared Mr Parsons.

Mr Fennelly said he and Ms Lalor had decided to step down because it was “time for a change.” He added: “I hope the Heritage Soceity had benefited from our work. It has been a very good time for the Society. The Society now is probably in a stronger position regarding influence.”

Ms Lalor, annnouncing her retirement from the post of Secretary, enthused: “It is a labour of love and anyone involved in the history and heritage will know the feeling.”

She concluded: “We may not always get it right, but it is never from the want of trying. It is the duty and privilege of the people of Laois to protect and be proud of their county.

“The Society has grown in strength and significance over the years and I wish it well into the future.”