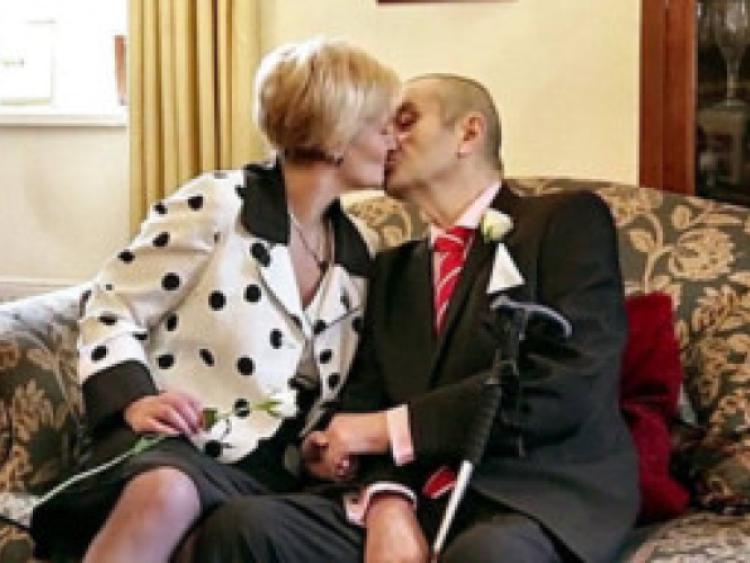 Rosenallis man Tom O’Loughlin is back on home soil with his bride, and the terminally ill cancer patient is determined to continue living his remaining days to the full.

Rosenallis man Tom O’Loughlin is back on home soil with his bride, and the terminally ill cancer patient is determined to continue living his remaining days to the full.

In a moving ceremony posted online, Tom and his ‘Nurse Maloney’, Lyndsey Pollard were married last Monday, February 2, officiated by the Dean of Shewsbury Cathedral.

Last Sunday the couple were flown home from Shrewsbury by private plane, and Tom couldn’t resist a sporting dig on his blog.

“Flight much smoother than we feared and we were fuelled with teas coffees, treats and even jokes from very attentive crew who doubled up as medical team. I was relieved to hear that one was a Man U supporter but grave doubts about the Arsenal supporting doctor. If he can’t support a proper soccer team what chance did I have in an airbourne crisis,” he quipped.

Speaking to the Leinster Express yesterday, Tom said he felt tired but good.

“I was told a month ago this Tuesday that I had a month to live, and I wanted to try to make the most of it. I have to say for the first two to three days, I broke down, I was devastated to get the news. Then I was put on tablets to help, and I feel significantly better. I took the opportunity and got married,” said Tom, who has non hodgkins lymphoma.

He is happy to be back home to see his family, his children, grandchildren and his mother Sarah, and has lots of places and people to visit, staying with his son Barry.

“Coming home was fabulous. I thought I wouldn’t make it home,” he said.

“I can’t complain, anything I wanted to do I seemed to be able to do. I am determined to make a real go, I seem to be in control, I still have a super doctor in and I have phenomenal help from Dr Timothy Honan in Portlaoise,” he said.

Tom has kept an incredibly frank honest account of his medical battle on his facebook page, and has been flooded with support from friends far and near.

“I am very grateful for all the calls, I have about 500 emails, and 400 or 500 phonecalls, I am impressed, it is unbelievable. I’ve had calls from all over the country from ex footballers,” said Tom, who like many of the O’Loughlins, played for Laois in his youth.

His brother Declan is glad he is home.

“It is great he got home, so he can see everybody, there are a lot of plusses to it,” he said.