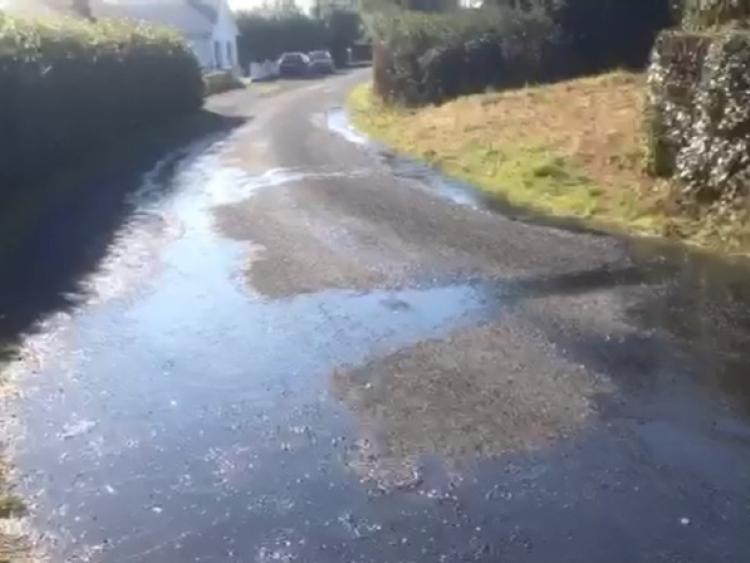 Raw sewage has again overflowed on to a rural road near Killenard, frequented by schoolgoing children and walkers, to residents’ anger.

Raw sewage has again overflowed on to a rural road near Killenard, frequented by schoolgoing children and walkers, to residents’ anger.

Human waste flowed down a road in upper Ballycarroll, near Killenard early in the morning on Friday August 28.

It is the thirteenth such spill since 2008, affecting residents of three houses beside the leaking manhole.

They include Denise Noone and her aunt, who both discovered the latest overflow as they walked on the road.

“It was bubbling out for a few hours, slowly but surely. It travelled in front of the house next door and just reached our property,” Ms Noone said.

She is frustrated, and concerned for her young family’s health, as well as that of passers by including schoolchildren and dog walkers.

“People from Ballycarroll, Tierhoger and Killenard use this road to walk, cycling bikes and walk dogs. There is a risk of cholera from raw sewage. If it happens on a school morning, there would be a lot more children walking on it to Scoil Naomh Eoin in Killenard, and people wouldn’t even know they are walking through raw sewage,” she said.

An alarm had alerted the sewerage caretaker to a previous night, however it was not fixed until the following morning, by which time the road had flooded.

“We were told this would be solved with the new alarm system but obviously it hasn’t stopped it. It is very annoying,” mother of two Ms Noone said.

The sewage overflows began after housing estates and a hotel complex in Killenard and Ballybrittas were built in 2008, with their sewage piped on to the pump station in Portarlington, still awaiting an upgrade.

Ms Noone asks why it was not done during the boom.

“Surely they should have known the capacity. I find it ludicrous that planning can go ahead for a hotel and all those houses, when the existing system is not able for it,” she said.

She is concerned that only the area around the manhole is disinfected by Laois County Council staff, leaving the rest of the road soiled.

“Nobody has come back to any of us. We would like a response,” she said.