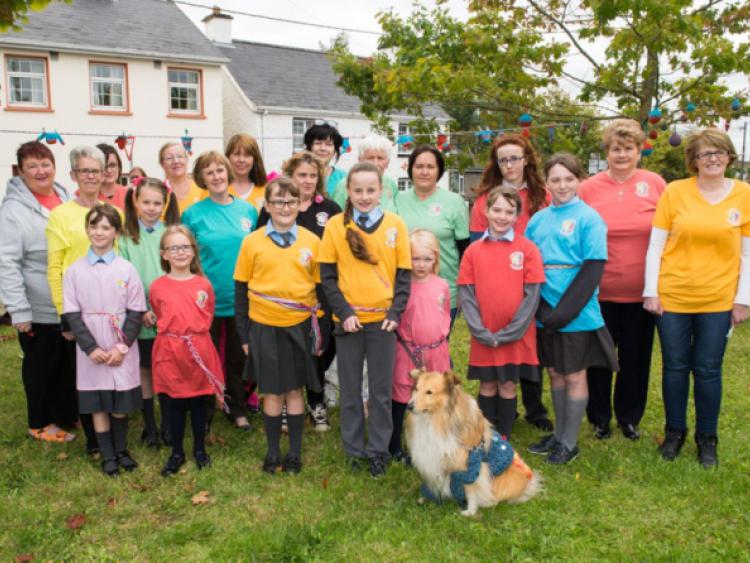 They struck at dawn whilst the town wslept on Sunday August 30, a battalion of women and children armed with woolly pieces of artwork.

They struck at dawn whilst the town wslept on Sunday August 30, a battalion of women and children armed with woolly pieces of artwork.

Mountmellick Yarnbombers’ mission is to bring smiles and colour to the town, by decorating it with woolly creations, guerrilla style.

A year on from their first ‘bombing’, they have hit again with twice as much impact, just in time for passing picnickers and the ploughing championships.

A woolly gazebo in front of the arts centre has a picnic bench to entice passers by to stop, while up the town, the wall of a pub has ‘woolly moss’ growing across it, pieces handmade by each bomber.

Many are children, making wool flowers and pompoms.

More and more creations are popping up daily.

The reaction from passers by and locals is positive, according to one of the group’s founders , Nina Horan.

“It brings a smile to everyone’s face, we are thrilled with the feedback, we got 13,000 hits online in the last few days. Everyone loves it. As we were putting stuff up cars were beeping going by, and people stopping to ask about it. It puts a positive spin on the town,” she said.

There is a core group of about 40 crafters, but businesses and homeowners have surprised everyone with their own displays.

“We are delighted with the support from the town. I think it appeals to all ages. We truly feel that textiles are in Mountmellick’s blood, because of the history of embroidery, weaving and sewing,” Nina said.

The group is asking supporters to show appreciation by donating to local charity the Ben and Jake Connolly Trust, which is raising money to build a wheelchair accessible home for two young boys.

“We want to harness the goodwill we are getting .We nominated them as our charity because they are local, and there is an urgent need for the family ,” she said.

Collection buckets are in local shops, or a text donation of €2 can be made to the trust by texting 57802.

The yarns will stay up for September, and will soon feature on RTE’s Nationwide.

After a deserved rest, the group will resume weekly meetings in the Methodist hall (beside Glanbia) on Tuesday evenings at 7.30pm later in autumn to plan their next attack.

“Everyone is welcome, you don’t even have to be able to knit or crochet,” said Nina.