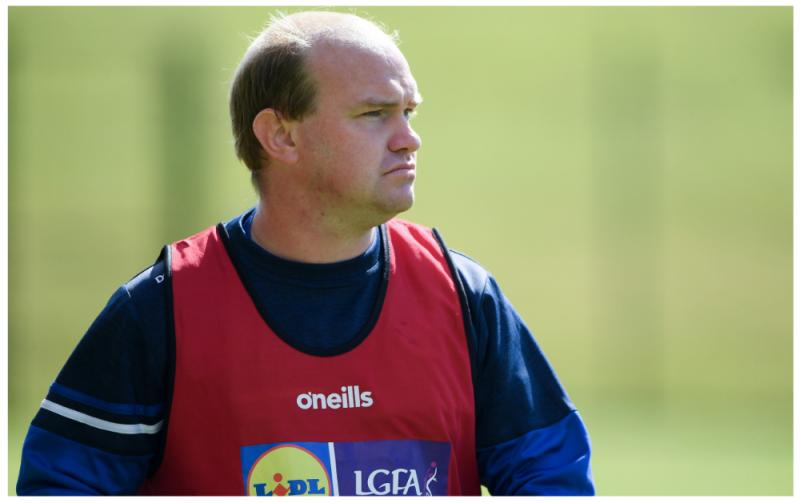 There was a real carnival atmosphere as families from all across the county turned up to show their support and get up close with the players and management at an special event held ahead of the appearance of Laois in the Ladies Gaelic Football Intermediate All-Ireland Final in Croke Park.

The Leinster Express spoke with team manager Donie Brennan at the open training session held in Portlaoise at at the Laois GAA LOETB Centre of Excellence on Wednesday, July 20.

After greeting fans, Brennan spoke about the value of having such support.

“It’s huge. It’s great for every young girl playing club football in Laois and playing in development squads that can see what’s possible. If they put in the hard work, win a few matches, and get involved and it’s great to be part of this; not just to be part of the panel, but you can see the wider community and the support that’s generated from winning,” he said.

Laois have been in outstanding form, making it look easy – on the scoreboard at least. In their last four fixtures, Laois have scored a combined 17 goals and 74 points, scoring 3-14 against Tyrone, 6-23 against Sligo, and 6-16 in the Quarter-Final against Wicklow.

The semi-final victory over Clare was a much tighter encounter, Laois getting over the line with just two points to spare. That battle-hardened experience can only be a positive going into the Final.

“Teams are trying to figure out how they’re going to stop us from getting these goal chances,” said Brennan.

“The last day, Clare did create more chances than us but we were more efficient in our chances. Semi-finals are hard-won anyway and Clare was super on the day and luckily we came out and we’re going to have another battle on Sunday week.”

The former Laois inter county player spoke about goals being a key tactic for the O'More women.

“The big thing is to create the chances and hopefully we can get the right player on the end of those attacks. If we do, well and good, or whoever gets there will just have to take their best shot. And that’s what we encourage: if you get in there, you have a go and we’ll be going for chances. We’ve 60 minutes to go out and score as much as possible and that’s the aim. From the first minute to the sixtieth minute we’ll be trying to put scores on the board.”

“The big thing about this team and the teams I like to play football with is that we like to have a go. We’ll have a go. We will leek a few chances but if we played with two sweepers or one sweeper we wouldn’t score (as much). We won’t be going out to sit back. And the girls love that as well, they love that environment we can create. We’re going to Croke Park and we’re going to have a go and we’ve 60 minutes to score more than Wexford,” he said.

It's more than two decades since Laois defeated Mayo to be crowned senior All-Ireland Champions in 2001. It was a hard earned win after much heart breaking defeats. Since then Laois have slipped down the divisions

The Arles-Kileen clubman is now laser-focused on getting Laois back into the top tier of Ladies Gaelic football.

“When I took (the job) first, I had my ambitions and that would’ve been for the girls to play Senior,” he said.

“We’ve turned it around, we’ve gotten girls back in who were missing and we have a close-knit panel now. I couldn’t ask any more of them; they’re hugely committed. And the main goal for this team is to be playing senior football let it be next year or the year after or the year after. It’s about getting these girls to play the best teams possible and achieve their potential,” he said.

Brennan says his team is just looking ahead.

“Wexford had the measure of us the last few times, but we are where we are and we are where we wanted to be. There’s no point talking about what happened last year or the year before or the year before – in any sporting context – it’s all about the next game or the next ball. Sunday week is going to be a huge day for the girls and the one thing that we’re trying to focus on is that they do themselves justice and the day doesn’t pass them by. They’re well focused for the game,” he concluded.