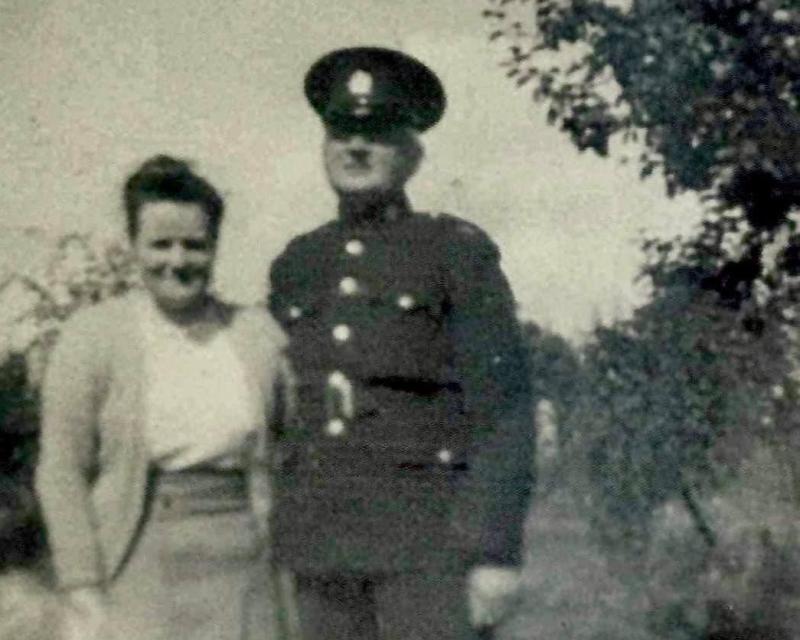 One hundred years ago this week, a brave 18 year old man joined the brand new Irish police force, and he would go on to work and make his life in Laois.

Sergeant John Nixon Shaw was one of the first ever Garda recruits, and his written memoirs are especially poignant this week as the force reaches its 100th birthday, founded in the midst of the violent civil war.

A Leitrim man, he joined on August 17 1922, five days before his 19th birthday. He went on to become a Detective and then a Sergeant again at the old Mountmellick Garda station, later setting up businesses and settling in Portarlington with his wife and family, many of whom still live in Laois today.

His story is one of love and family as well as his bravery in An Garda Síochána and loyalty to the newly born Irish state.

John wrote about his early days in An Garda Síochána, in articles for The Garda Review magazine in 1975. 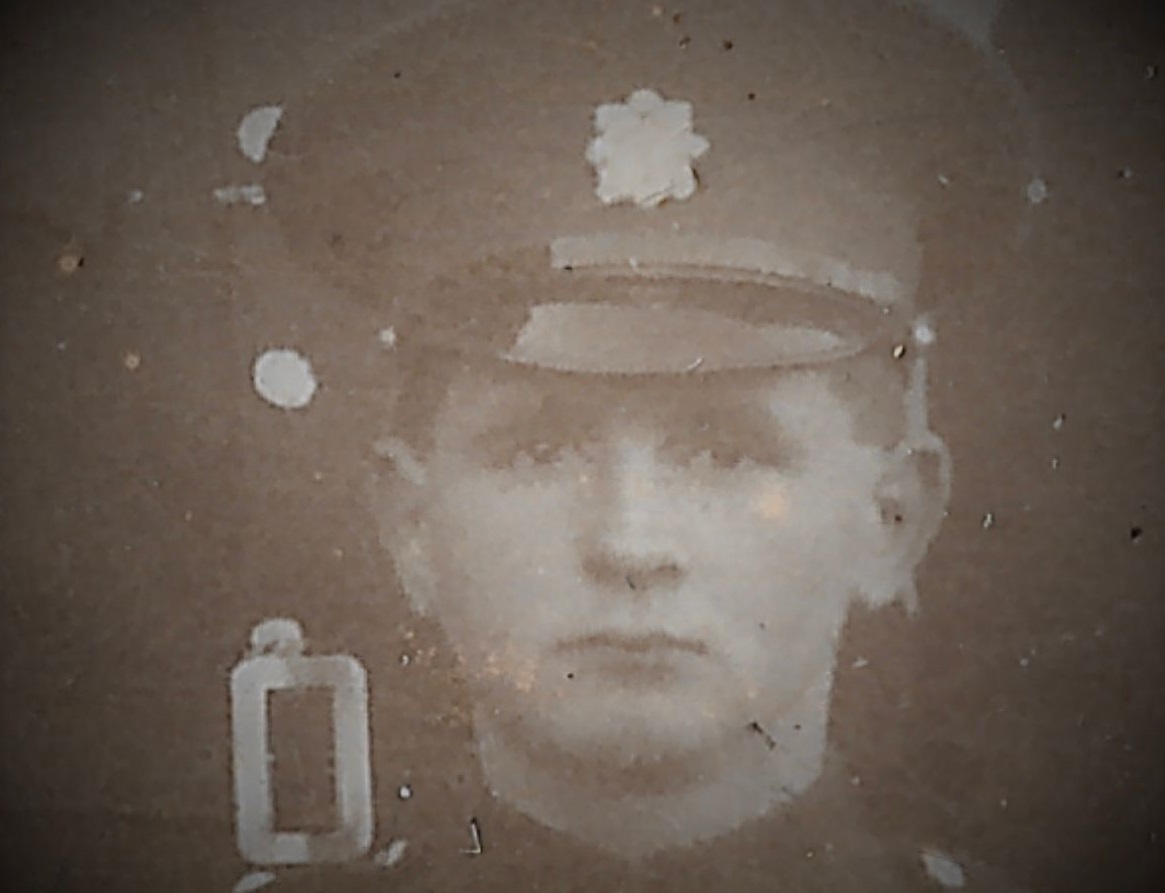 “Those days in early 1922 were very confused and a lot of people like myself did not know where to turn. Although I was keen on the Army, I did not like to take part in the Civil War, which was just breaking out, as I had a brother who took the opposite side to me.

“I was thinking of emigrating when I happened to see in a paper a bit about the ‘Civic Guard’. I made enquiries and was told that there was a depot in the Henry St. warehouse in Denmark Street, Dublin. These premises were apparently the storerooms of a shop of that name, but were not being used as such at this time.

“I went there and knocked at the entrance and there I saw my first member of the Garda. He was in plain clothes with a black RIC belt with a revolver in the holster,” he said.

His immediate duties, with no training, including standing guard outside banks in Dublin, without a uniform but holding a rifle.

He was part of the guard of honour at Michael Collins’ funeral on August 28, for which the first uniforms were provided. 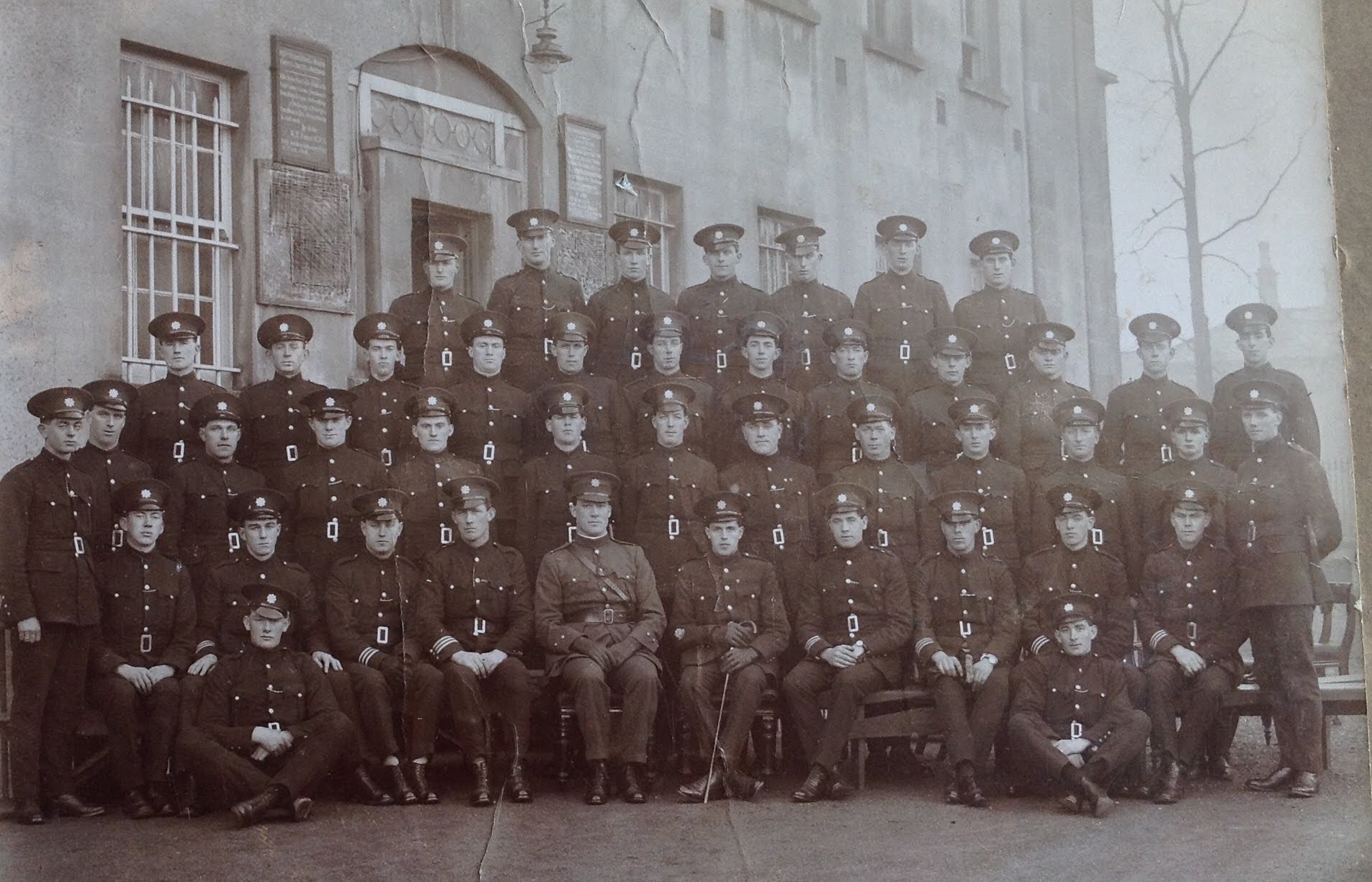 His son Jim Shaw who lives in Garryhinch told how his father rose quickly through the ranks, becoming a detective first and then a sergeant at about 24 years old. He was posted in Waterford where he met and fell in love with a local girl, Olive White. Being Church of Ireland and Olive a Catholic, the couple rushed to England in secret to be married.

“He hadn’t got permission to get married from his superiors, so he was suspended for a couple of weeks. Then they moved to Sallins because if you married a local person you were moved, for fairness.

“He was a detective Garda, with a driver, when on the birth of their sixth child, Olive died. Then being a single Protestant man, there was talk of the Catholic church taking the children from him to be put in an orphanage, for fear they would be raised as Protestants. He decided to seek a reduction in rank to Sergeant because then he could live in a barracks with the children,” Jim explained.

The next vacancy was Rathvilly in Carlow, where Sgt Shaw employed a nanny as he worked. He fell in love with Molly Halligan, also a Catholic.

“They were told they could get married at a side altar, but my grandfather Halligan, who was Catholic, told the priest they would go to the Protestant church to be married if they weren’t let marry at the main altar,  and he won the case,” Jim said.

With marrying another local woman, the family had to transfer again in 1939, this time to Mountmellick Garda station, which Jim understands was the Georgian house on Patrick Street that is owned by Dr Bergin.

The couple went on to have another 10 children, moving to a four storey Huguenot house on Patrick Street in Portarlington. 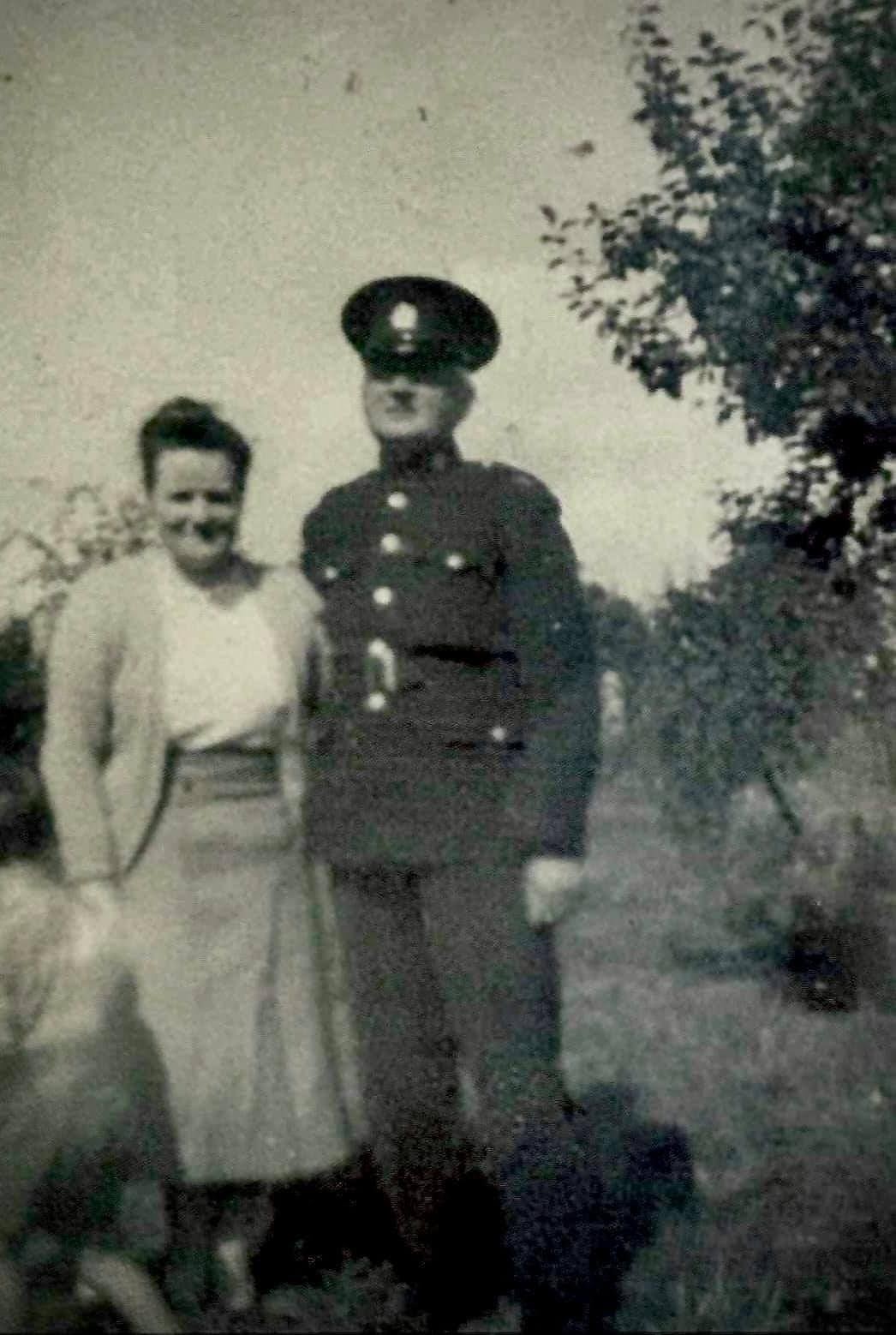 After his retirement in 1953, with employment rife, the couple set up Batt’s Leather Goods in Mountmellick, employing local people making luxury handbags and purses, but it closed within a decade due to the poor economy.

“They tried a confectionary business in Portarlington but that went with the economic climate too. He was still a young man, he was only in his 50s. He heard there was work in the Cypress police force, where they were changing from English rule to Cypriot rule so he worked there for a few years. After that he worked in England, and they brought over the two youngest, David and Aiden and bought a house in Slough, with some other children living near them as well,” Jim said.

He has happy memories of growing up in Portarlington, as he was only three when his father retired as the Mountmellick Sergeant.

“We had a fantastic time growing up. We had a huge garden. In those days by the time the youngest was born the eldest would be gone, with maybe 20 years between them. He was a perfect father. He had no need for discipline, we all respected him. He dedicated his life to his family. I had a wonderful childhood.

“I remember one time he took me and my brothers Tom and Frank to Dublin in the late 40s or early 50s, to Dublin Castle. He showed us a spot on the wall where a sniper shot at him on duty in the Civil War, the mark of the bullet was in the wall,” Jim said.

The retired Garda wrote extensively about the early days of the police force. “Nobody knew in those early days in 1922 what it would be like except General Michael Collins who had stated that it would be unarmed, '' he wrote. “It was to replace the RIC and those members were always armed.”

He credited the workings of this unarmed force to the rank and file, the ordinary Sergeant and Garda.

They were ‘just a party of uniformed men in a strange setting in a very disturbed country,” John Shaw wrote.

Below: Sgt Shaw (front centre) in 1953, the year of his retirement. 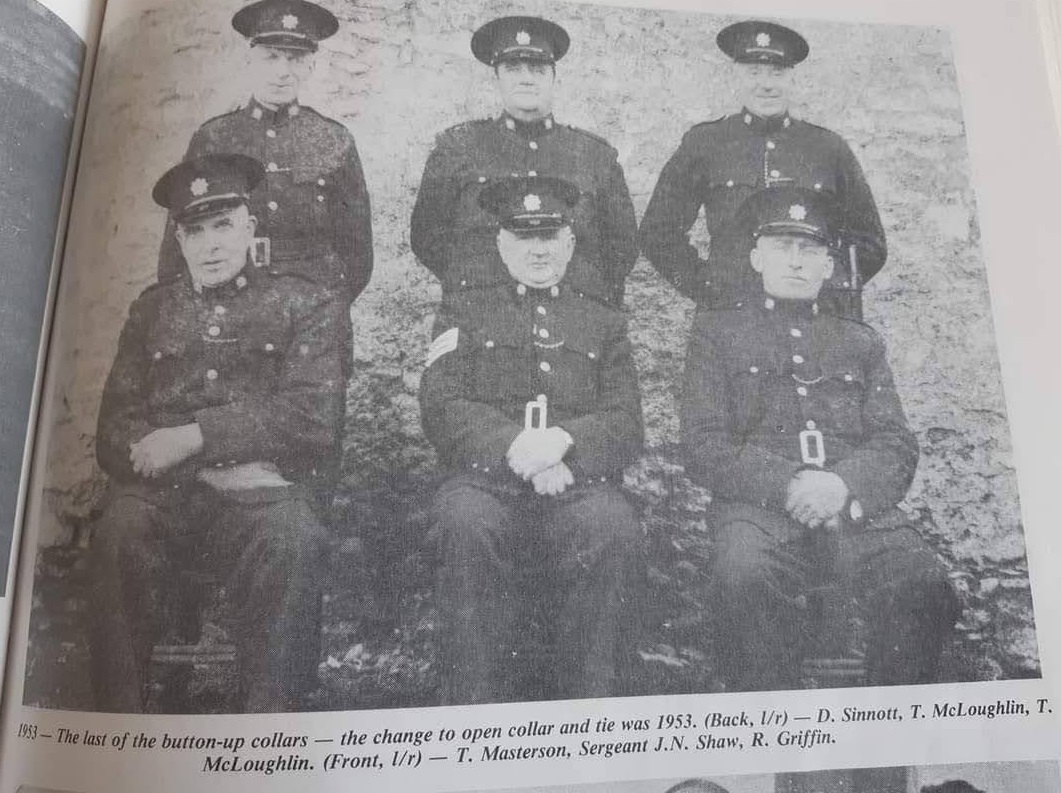 They had no idea of what their work would be, only the general idea that they were police to try and keep the peace.

Sgt Shaw dedicated his memoirs to that fine body of men, with whom it was his great privilege to have served, who opened the first Garda stations “at the time we were known as Civic Guards, and we were in barracks”.

There were not even Irish courts to process cases.

“The first of the District Courts did not sit until early 1923. Up to that time any cases there were held before Republican Justices, who because of the undefined status remanded any case coming before them till a District Judge could legally deal with it,” he said.

His papers were later donated to the Garda Museum by his family after his death in 1986 and have been referenced in several publications on the Gardai over the years.

His memories are part of a new book by John O’Brien, a retired Detective Chief Superintendent, about the birth of the Garda Síochána, launched this week on the 100th anniversary.