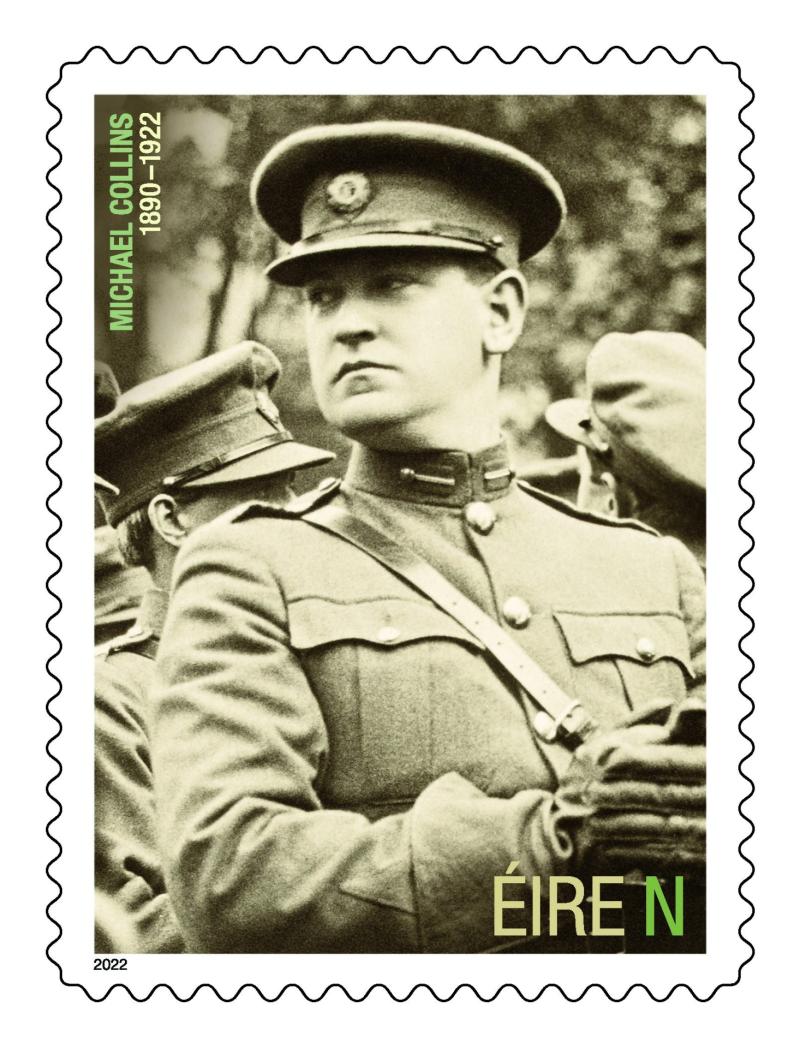 A stamp commemorating Michael Collins is due to be released tomorrow ahead of the centenary of his death on Monday, August 22.

The national (N) rate stamp, designed by Ger Garland, goes on general release this Thursday and is available in selected post offices nationwide and at anpost.com/shop.

The design features photography by C. & L. Walsh, of Michael Collins in military uniform (courtesy of the National Library of Ireland.)

An Post have also produced a commemorative First Day Cover (envelope) which carries the new stamp and a specially designed cancellation mark featuring Collins’ name in similar typeface to that on the Béal na Bláth monument. In a break from tradition, and marking Collins’ Cork background, the cancellation mark includes the designation ‘Corcaigh’.

Michael Collins’ death on August 22, 1922 was the highest profile casualty of the Irish Civil War, which arose over the terms of the Anglo-Irish Treaty. As Chairman of the Provisional Government and Commander-in-Chief of the newly established Irish Army, Collins was the main pro-Treaty advocate.

Taoiseach, Micheál Martin said: “I welcome An Post’s issue of a single commemorative stamp to mark the centenary of Michael Collins death. It is fitting that an individual such as Michael Collins, who played such a pivotal role in the foundation of our state, should be commemorated in this way.”

Tánaiste and Minister for Enterprise, Trade and Employment, Leo Varadkar said: “Michael Collins was instrumental in shaping our State. To me, he is first among equals among its founders. He had the courage to take on an Empire forcing it to the negotiating table. He then risked his reputation and his life by working to secure a peace settlement persuading the majority of people to support it. It is especially fitting that this stamp will be issued by An Post ahead of the centenary of the assassination of Michael Collins on Sunday 22 August.”

Collins left Dublin with an escort convoy for his native County Cork on August 20, 1922. Two days later, they travelled to West Cork,.passing through the tiny crossroads village of Béal na Bláth, where they were spotted by a scout with the local anti-Treaty forces. With many of the roads in the area blocked, they returned via the same Béal na Bláth route, where anti-Treaty forces ambushed the group, Collins was the only fatality in the ambush.

Known as the ‘Big Fellow’ —  Michael Collins was a leading figure in the War of Independence. He was aide-de-camp to Joseph Plunkett during the 1916 Easter Rising. A British signatory to the Anglo-Irish Treaty in December 1921, Lord Birkenhead, said that, in doing so, he may have signed his political death warrant. Michael Collins, a member of the five-strong Irish delegation who signed, was quoted as saying: “I may have signed

my [actual] death warrant.” His premonition tragically came to pass less than nine months later when he died in the ambush at Béal na Bláth.