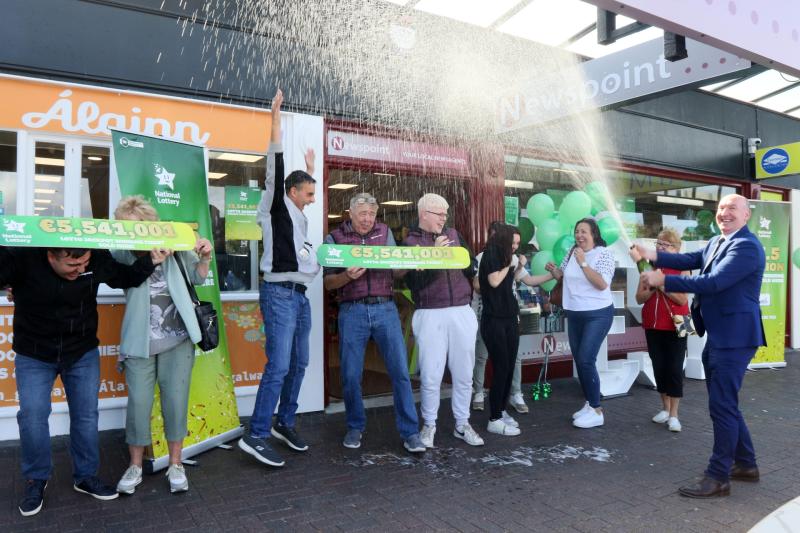 It was a dream come true today for a group of Galway City Council street cleaners as they collected a lotto jackpot prize worth €5,541,001 in Lottery HQ this afternoon.

The ten-man syndicate was formed almost twenty-five years ago, with all numbers chosen for the draw individual to all the members.

One syndicate member spoke of how they had to keep the belief going after so many years; “The lads thought about changing the numbers at one stage, but decided against making any changes. Just last Christmas, one member mentioned that he was going to leave the syndicate, but he was persuaded to stay on and was told it was only the price of a pint and a newspaper. Luckily, he stayed as the syndicate winning numbers appeared on the August 3rd Lottery draw”, he said.

The large syndicate have become Ireland’s 7th Lotto Jackpot of the year. The winning ticket was sold in Newspoint newsagent, Unit 25, Galway Shopping Centre, on the Headford Road on Sunday, July 31.

“Someone said that we ‘cleaned-up’ and we did, but us lads clean up every day by ensuring the streets and parks in Galway city are spotless. We’re proud of our city. Unlike the ‘magnificent seven’ -these ‘magnificent ten’ can now all ride off into the sunset with their lottery win secured”, another syndicate member added.

‘Mam, you better take a seat for what I’m about to tell you’

Meanwhile, a winner from Kildare collected their top prize of €500,000 EuroMillions Plus draw which they won on Tuesday, August 9. The winner who wishes to remain private spoke of the moment they realised they won.

“It was my mam’s birthday so I bought her a EuroMillions plus ticket and then thought I’d by one for myself too while I’m at it. I checked the numbers coming up and couldn’t believe it. It ended up being my ticket that won!! My mam said it made her birthday even better knowing I’d won. I’m hoping to purchase my first home so this couldn’t have come at a better time”, they said.

The winning Quick Pick ticket was sold on August 6 at the News 4 U store in Glenroyal Shopping Centre, Maynooth, Co Kildare.