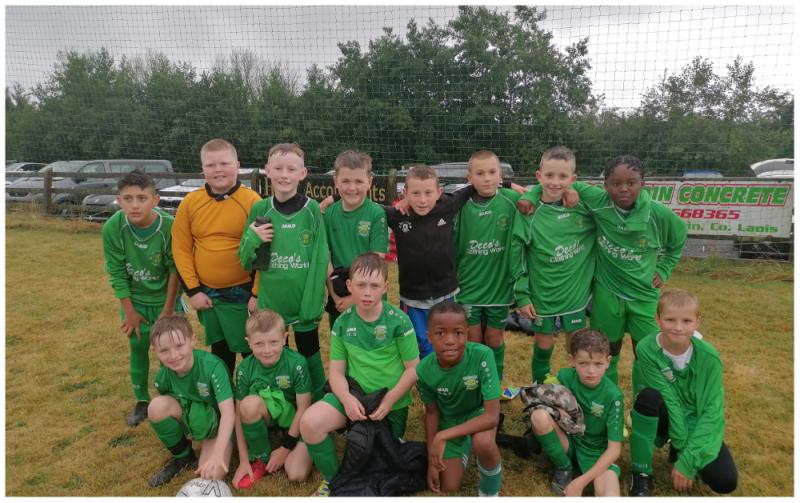 Portlaoise Town U11s travelled to St Aengus on Saturday morning for their first outing of the season. On a wet and windy morning, both sides had to battle through the conditions for the early kick-off. Portlaoise towns squad were coming off an incredible end to the 21/22 season which saw them unbeaten in their final 22 games with 21 wins leading to a league and cup double in the second half of the season. All players involved last year have returned for the coming season while also adding some new players to increase strength in depth.

Portlaoise wasted no time in picking up from where they had left off last season and it was one of the new players to the panel Cameron Agoro who opened the scoring after just 5 minutes with a tidy finish past the St Aengus keeper. Just a few minutes later Ronan O Gorman opened his account for the year with a well-worked team goal. Portlaoise was looking to press St Aengus at every opportunity and straight from the kick-off would turn over possession and the ever-present Ronan O Gorman would find Zach Bowe who calmly slotted home to give Portlaoise a 3 goal lead.
Danny Kerry in the Portlaoise goal, who was making his debut for the town squad had very little to do in the
first half as Harry Ryan and Tafara Zhou held firm in the back line and snuffed out any opportunities St
Aengus created. Kian French deployed his full arsenal of tricks and skills as the half went on and constantly
had the St Aengus defence twisting and turning and would grab a brace just before half time with two great
individual efforts. Andy Cash would also get on the score sheet with some quick thinking in the box as
Portlaoise took control.

St Aengus were much improved in the second half and were starting to get to grips with the pace of the
Portlaoise pressing and their quality passing game but Portlaoise would continue to pour forward. Flynn
Cullen and another debutant in Zulaid Ahmad were having a growing influence on the game, with both
players controlling the midfield excellently. Tafara Zhou added the to the score ten minutes into the second
half and that was quickly followed by Ronan O Gorman adding his second with a top class finish that left
the St Aengus keeper with no chance. St Aengus continued to struggle in attack with Harry Brady and
Nikodem Andrzejkowicz, who was the 4th debutant for the day, anchoring the defence for much of the
second have. Brady’s precise passing and Nikodem’s speed and strength were too much to handle for the
St Aengus forwards.

Second-half goals from French, Bowe and O Gorman along with a double from Andy Cash saw Portlaoise
secure the points