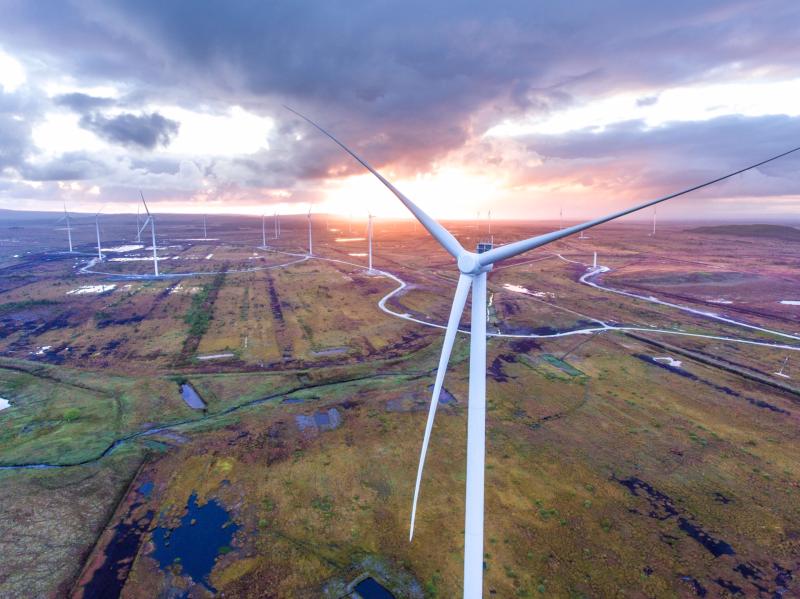 BORD na Mona's proposed wind farm on the Offaly/Kildare boundary not far from Portarlington will be the second largest in the country with 47 turbines while the company is examining .

The Ballydermot Wind Farm will also have the tallest turbines, with a maximum tip height on most of the structures of 220 metres.

It's also emerged that the State-owned firm is eyeing up land on the Offaly/Laois boundary near Cloneygowan and Cloneyhurke for more big turbines.

The company is already running wind farms at Mount Lucas and Cloncreen in north Offaly.

Bord na Mona say a planning application will be submitted directly to An Bord Pleanala in late 2022 for the Ballydermot project.

First, the energy company will seek a determination from the board on whether or not the project has Strategic Infrastructure Development (SID) status but given its scale, it is likely to meet the criteria.

Bord na Mona says the final wind turbine Layout has been designed with a minimum setback distance of 880 metres to the nearest house from a turbine.

This complies with the Draft Wind Energy Development Guidelines (2019), which proposes a setback distance of four times the tip height between a wind turbine and the nearest residential property, subject to a mandatory minimum distance of 500 metres.

Twenty of the proposed turbines will rise to 200 metres and these will be on the outer edge of the wind farm, including those nearest Clonbullogue village, around the Derries and to the south near Killenthomas Woods.

On either side of the Cushaling river and furthest away from any houses, the tip height will be up to 220 metres above ground level.

A map published by Bord na Mona indicates that 27 turbines will have a maximum height of 220 metres.

Bord na Mona has also published a “Draft Amenity Plan” and says new access roads will be constructed and they will also be used for walking trails, cycling and horse riding.

The locations of three car parks for these amenities are included on the maps, along with an “Equestrian Only” trail.

There will be a sensory garden and play facilities, toilets, benches and picnic tables, shelters, interpretation panels and sculptural features.

“Much like the nearby Mountlucas Wind Farm development and associated amenity facilities, the proposed Ballydermot Wind Farm has the potential to deliver a range of economic, social and environmental benefits at the local, regional and national level,” according to a company information booklet.

“Existing walking/cycle paths on the canal routes have the potential to be linked into the proposed amenity facilities at Ballydermot Wind Farm,” says the company.

Feedback on the plan can be emailed to ballydermotwindfarm@bnm.ie by Friday, September 30.

The company says the public's views, along with results from further studies, will help Bord na Mona identify the best plan to take forward into the planning process.

The proposed Ballydermot turbines are substantially taller than those now in place nearby at the Cloncreen Wind Farm, where the maximum tip height is 170 metres.

Bord na Mona's 75 MW 21-turbine Cloncreen project was recently commissioned and is the company's second wind farm in north Offaly, following on from Mountlucas, where there are 28 turbines capable of generating a maximum 84 MW of electricity.

Bord na Mona has planning permission for a 21-turbine 85 MW wind farm at Derrinlough in west Offaly and hopes to build another 17 turbines at Lemanaghan.

Also on the Offaly/Laois boundary near Cloneygowan and Cloneyhurke, Bord na Mona is studying an area for a proposed Garryhinch Wind Farm.

Currently, Ireland's largest onshore wind farm is in west Galway where there are 58 turbines at SSE Renewables' facility in Connemara.

SSE Renewables is the company behind the Yellow River Wind farm project between Rhode and Croghan.

When developed, it will be the largest wind farm with all of its turbines in Offaly and planning permission was granted in 2014.

Its developer says it will have 29 turbines, up to 166 metres high, with a maximum output of 104 MW. The turbines will be located on sites leased from 22 local landowners.

At the beginning of June it won a provisional contract under the Renewable Energy Support Scheme (RESS-2).