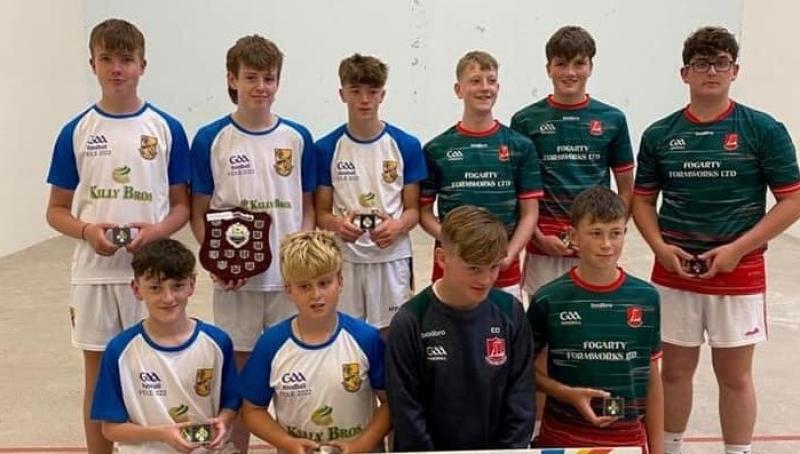 The Leinster 60x30 Adult and Juvenile Handball championship doubles finals were played over the last two weekends with Laois represented in four finals.

In the Ladies Junior B final, Aoife and Úna Brophy of Cullohill faced a very formidable pairing in the recently crowned All-Ireland singles champion Cliodhna O’Connell and her playing partner Cora Doyle of Wexford while in the Men’s O35 B final, St. Brigid’s, Monavea handballers Andrew Dowling and Tómas Lennon were pitted against Kilkenny’s Diarmuid Brennan and Brian Bourke.

In the Girls U17 final, Cullohill’s Orla Brophy and Éadaoin Whyte faced Kilkenny’s Aisling Cooney and Orlaith O’Shea while in the Boys U15 final, Jimmy Whyte and Ethan Lafferty also of Cullohill squared off against a strong Wexford partnership
in Jamie Moran and Seán Fitzharris.

Aoife and Úna Brophy have had a remarkable 2022 so far, capturing Leinster and All-Ireland 40x20 doubles titles but unfortunately they were unable to add another title to their collection last weekend Ladies Junior B Final.

The opening game saw the Laois girls perform brilliantly with some excellent return of serves and passing shots allowing them to keep pace with their more experienced opponents. MORE BELOW PICTURE. 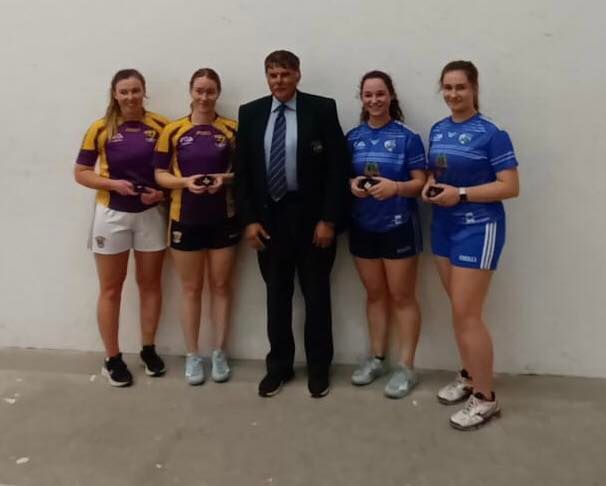 However, despite their brave efforts, the extra 60x30 experience of the Wexford pairing told and they captured the opening game 21-15. Buoyed from winning the opening game, the impressive O’Connell and Doyle stepped up a gear in the second game and deservingly powered their way to the Leinster title on a 21-15 21-8 score line.

Despite the loss, the Brophy sisters showcased huge potential and with further experience of playing big alley handball they will be a force to reckon with at this level in 2023. MORE BELOW PICTURE. 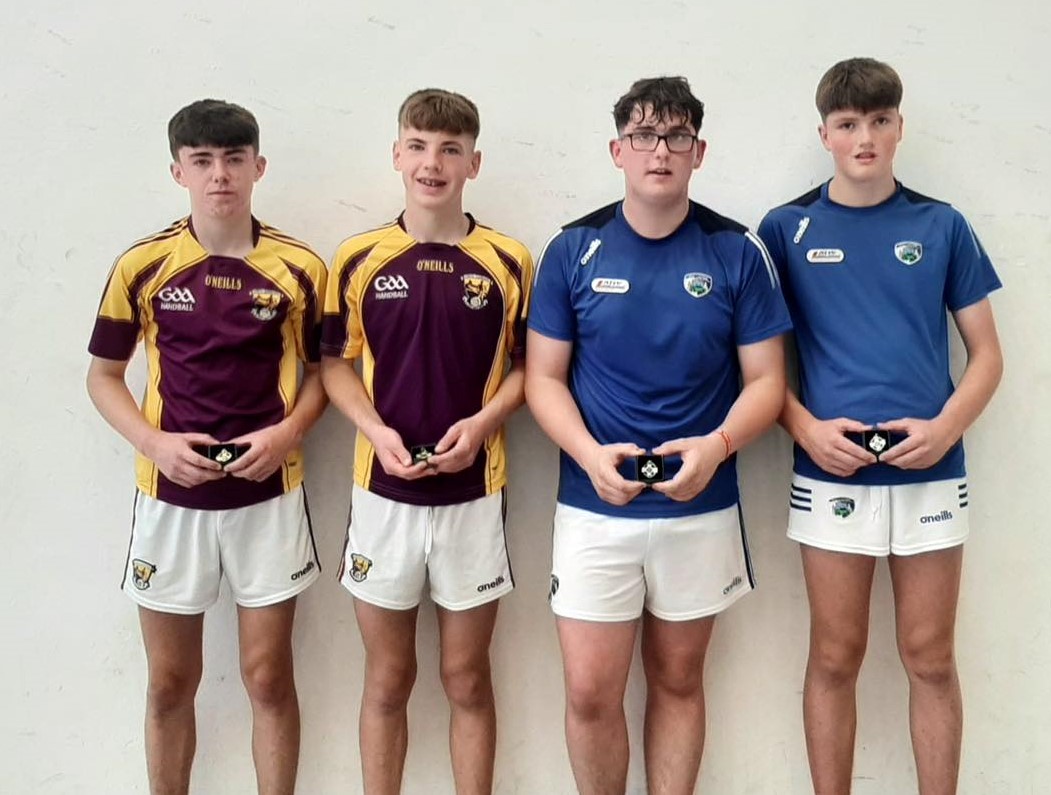 Like Aoife and Úna, Andrew Dowling and Tómas Lennon entered these championships with Leinster and All-Ireland titles already secured in the 40x20 courts. So their next target was the Men’s O35 B Final.

In an impressive Leinster semi-final showing the Monavea handballers had dispatched of Wexford’s Colin Redmond and Keith Deveraux 21-7 21-19 to book their place in the Leinster final. In the final, Andrew and Tómas produced probably their best performance of the year to a record a resounding 21-13 21-4 victory over their Kilkenny opponents.

Their ability to kill the ball when opportunities presented themselves proved telling, allowing them to build up a sizeable early lead and one that they were never to relinquish. The Laois pairing now progress to an All-Ireland semi-final and hopes are high that they can achieve a remarkable double of claiming 40x20 and 60x30 All-Ireland titles in the one year. MORE BELOW PICTURE. 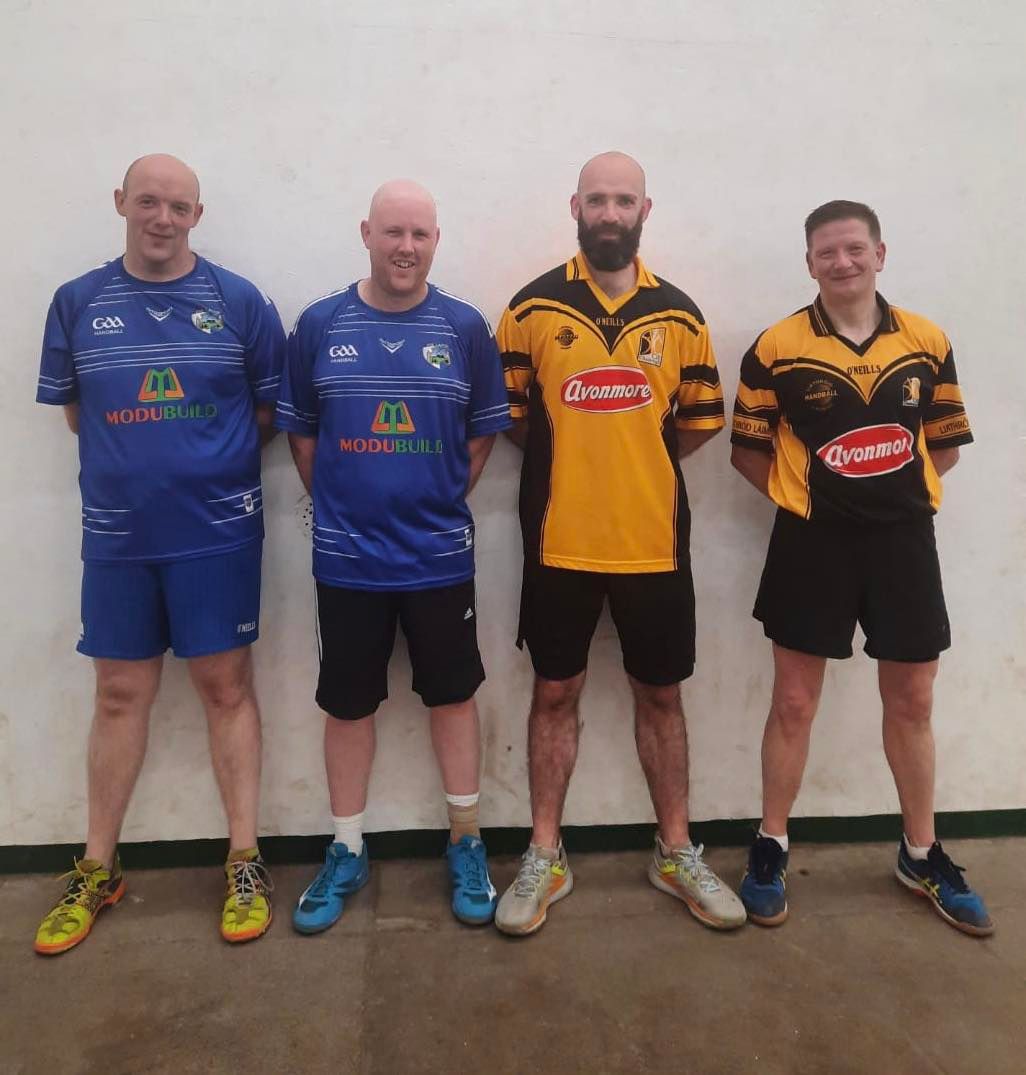 The Juvenile Finals were also contested.

Well done to Orla Brophy, Éadaoin Whyte, Jimmy Whyte and Ethan Lafferty on their fantastic performances in the Leinster 60x30 Juvenile Finals that were played in Garryhill at the weekend.

In the Girls U17 final, Orla and Éadaoin produced a huge upset to defeat Kilkenny’s Aisling Cooney and Orlaith O’Shea 21-10 21-11 in a high quality final. The Laois girls played excellently throughout and were very deserving winners on the day. Unfortunately, Jimmy and Ethan fell just short in their quest for a Leinster title when they were defeated 15-6 15-4 by Wexford’s Jamie Moran and Sean Fitzharris in their U15 doubles final.

The Laois pairing have showed great promise this year in the big alley having performed brilliantly for Cullohill at the 60x30 Féíle na nGael and in their remarkable Leinster semi-final victory over Oisin Farrell and PJ McHugh of Kilkenny. In that semi-final, the Cullohill handballers fell 13-0 behind in a tie-breaker but displayed huge skill and a never say die attitude to overturn the deficit and record a remarkable 15-13 deciding game victory. MORE BELOW PICTURE. 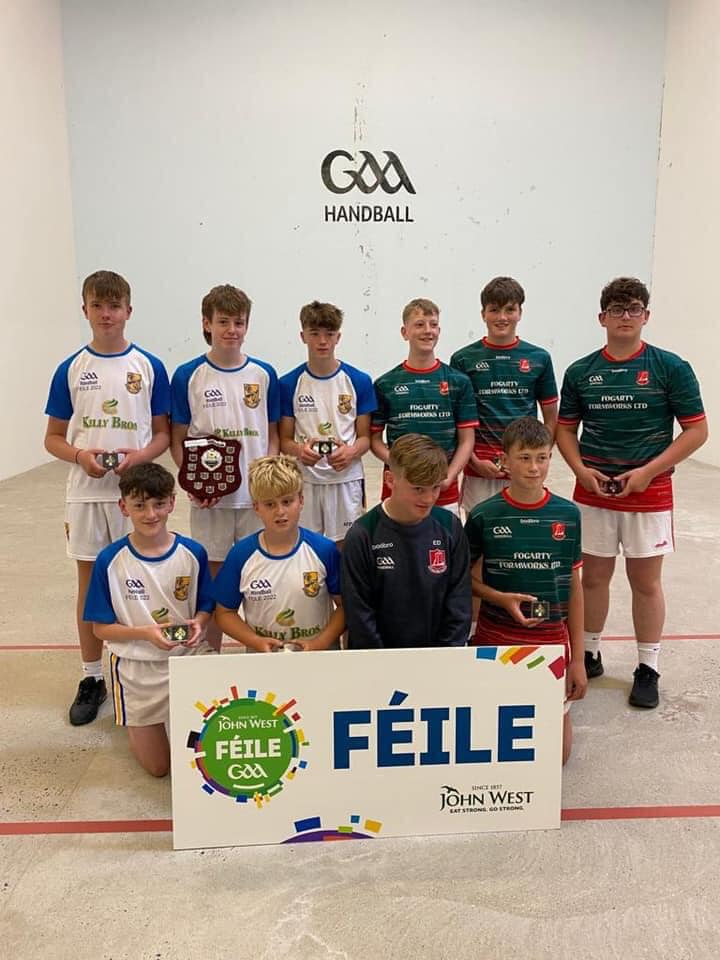 Hopefully in the next couple of years the Laois pairing will be able to capture that elusive Leinster title.

Wexford hosted this year’s Féile na nGael 60x30 at the end of August with Cullohill taking part in Division Three of the boys competition. In the group stages they recorded impressive victories over St. Brigid’s and Mullingar.

Unfortunately they could not overcome a very strong Ballydesmond team in the final. In the skills competition, Ethan Lafferty showcased his handballing talents to secure the silver medal for the Cullohill club.