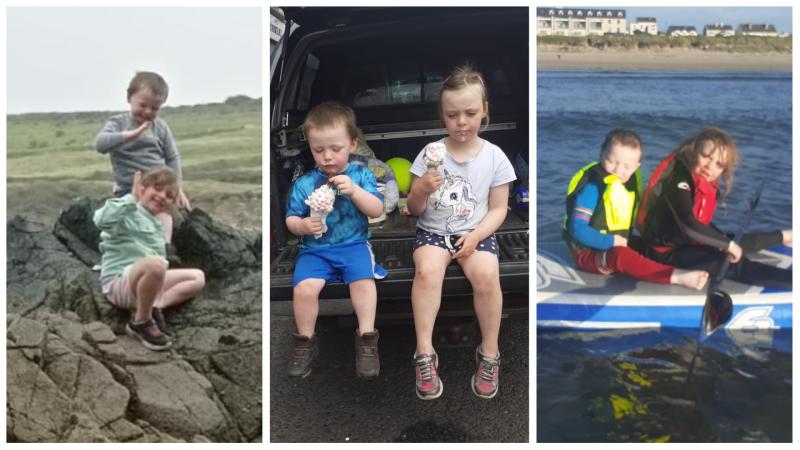 Mikey and Thelma Dennany who died in a fatal car fire at Lacken, Multyfarnham

The funeral of two children who died in a car fire in Westmeath will take place at St Mel's Cathedral in Longford on Thursday.

Mikey (2) and Thelma (5) Dennany were tragically killed after the car in which they were travelling was found ablaze a bog road not far from the Co Westmeath village Multyfarnham shortly before 4pm.

Their mother, Lynn Egan, who was pulled from the car, remains in hospital with what is believed to be non-life-threatening injuries.

Mother-of-four, Ms Egar, who is in her 40s, suffered significant burn injuries in the incident after being airlifted to hospital.

The brother and sister will repose at Glennon’s Funeral Home, Ballinalee Road, Longford on Wednesday from 4pm concluding with prayers at 8pm.

Both children will be laid to rest in Cullyfad Cemetery following Mass of the Angels in St Mel’s Cathedral, Longford, on Thursday at 11.00am.

A death notice on RIP.ie said the two children had passed away "unexpectedly" and were pre-deceased by their grandfather Austin Dennany and by their grandmother Thelma Egar.

It comes after Garda Commissioner Drew Harris confirmed yesterday that a criminal investigation was underway into the circumstances surrounding the tragedy.

Gardaí made an appeal for help from members of the public who were in the area of Lacken, Multyfarnham, between 2pm and 4pm last Friday, September 9, and who have any video footage, including dashcam or other footage, to make it available to them.

Gardaí added that a family liaison officer is continuing to keep the family updated.

Taoiseach Micheál Martin yesterday extended his sympathies to the family of the two children.

“We’re all deeply conscious of the terrible tragedy that happened at nearby Multyfarnham with the two young children [who] passed away in the most tragic of circumstances,” he said ahead of a Fianna Fáil think-in meeting in Mullingar.