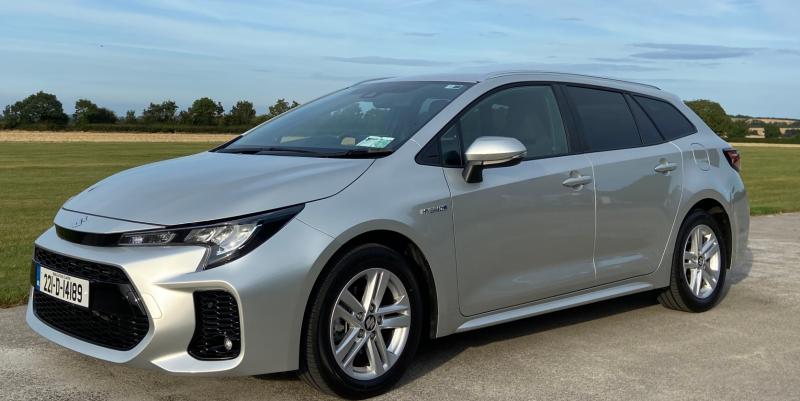 Suzuki have a very small presence in Ireland largely due to the fact that despite a loyal following their range is really quite small. So too are most of the cars in that range, but that’s changed recently with the arrival of the new Suzuki Swace hybrid estate.

Like many manufacturers these days there is often huge collaboration between them in order to keep development costs down. Take for example Renault and Nissan or the VW Group all who share engines and gearboxes and indeed much more across different models. Well so to with Suzuki and Toyota.

The Suzuki Swace is in fact a re badged Toyota Corolla Sports Touring hybrid  with a few changes cosmetically to the front and rear. The benefit to Suzuki is of course that it opens up a new segment of potential customers who heretofore could not get a mid size estate from the Suzuki range.

My test car was finished in a nice metallic silver and the tweaks to the front and rear end styling work well. So yes while no head turner it does look rather smart indeed.

Everything is where you would expect and functionality is very good. I liked the clean layout of the cabin and there is a real quality feel to all the materials used inside.

There is plenty of standard kit including Apple Car Play and Android Auto however the screen graphics look little behind the current offerings from other manufacturers.

The driving position is very good and the semi digital instrument cluster is clear and easy to read. All switches and levers fall easily to hand and its roomy too with decent heard and legroom both in the front and rear.

There is plenty of storage space with big door bins cup holders and so forth.

The load area is excellent offering up to 596 litres of space with the rear seats in place so all in all nice package.

As you might have guessed Toyota’s 1.8 litre petrol and an electric motor for this self charging hybrid. The combined power output is 122 bhp which does give this new Suzuki a reasonable turn of pace. I’m not a fan of the CVT gearbox and it can all sound a bit revvy at times but overall it works as the car switches seamlessly from petrol to electric motor and back almost unnoticed. Over some 500km I returned an overall fuel consumption of 4.9 litres per 100km which is really very good indeed. Road tax will cost you €190.00 per year.

You won’t get up early in the morning to take it out for a blast but it does drive rather well. Its smooth and relatively quiet and the handling is surefooted in all conditions.

It proves comfortable and is pleasant place in which to travel.

What’s not to like really? The new Suzuki Swace is a really well sorted all round package its a Toyota after all. So its a tried and tested car and really delivers in all areas without being exceptional in any one.

I like the new Swace. However I leave you with this thought. It’s slightly more expensive than the Toyota Sports Touring hybrid equivalent model. I can only ask Why?