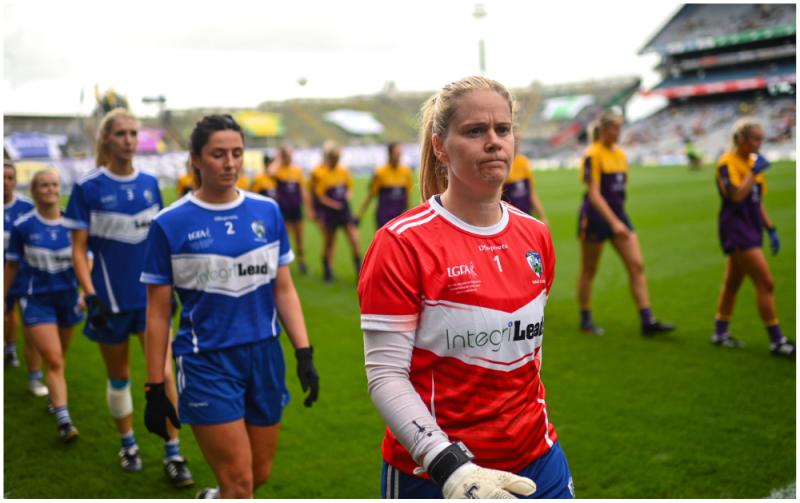 It may have taken a couple of phone calls to convince her but reminiscing on her return to the Laois fold, Eimear Barry is certain she made the right decision.

Laois were crowned TG4 All-Ireland Intermediate Champions after they defeated Wexford, with their goalkeeper one of the stars at Croke Park.

A crucial save in the second half to deny Wexford forward Aisling Murphy ensured that Barry won the ZuCar Golden Glove award and it capped a brilliant year for the O’Moore County and their 37-year-old shot-stopper.

“My performance wasn’t too bad, the kick-outs were good,” says a modest Barry.

“You make a couple of saves and it’s a bonus in the Ladies game, they don’t expect you to save because maybe the standard of goalkeeping hasn’t been as good as it is now.

“There was one save and I know there was another goal gone in. But at the time in the game, the save that was made, it was a crucial moment because Wexford were coming at us.

“It would have given them a good bit of momentum if they had got a goal because there were only ten minutes gone in the second half. They would have had plenty of time to build on it. The goal they did get, maybe we had time to run down the clock. It might have been only about six minutes left. It was a good day.” More below tweet.

Is Eimear Barry's stunning save your choice for the 2022 @zucarireland Golden Glove award?

Barry prides herself on her kick-out and she knows that was crucial against Wexford. Laois scored heavily in the Intermediate ranks this year and Mo Nerney ended up claiming the ZuCar Golden Boot award too – but those attacks usually begin from deep, with their goalkeeper acting as playmaker. “Kick-outs are a huge thing in the Ladies game. The kick-outs were important for us to build a platform in the final,” said Barry.

“It’s down to the girls, I can only kick out the ball and if the girls aren’t showing for the ball, I am going to look silly. A lot of it is the girls out the field making the runs and creating space.

“Even if they don’t get the ball, they are creating space for others. We would build momentum and pace and trying to get the ball forward is a big part of the way we play. We are an entertaining team. If you score ten, we will score eleven. The kick-outs are probably a platform to build on those attacks.” More Below Picture 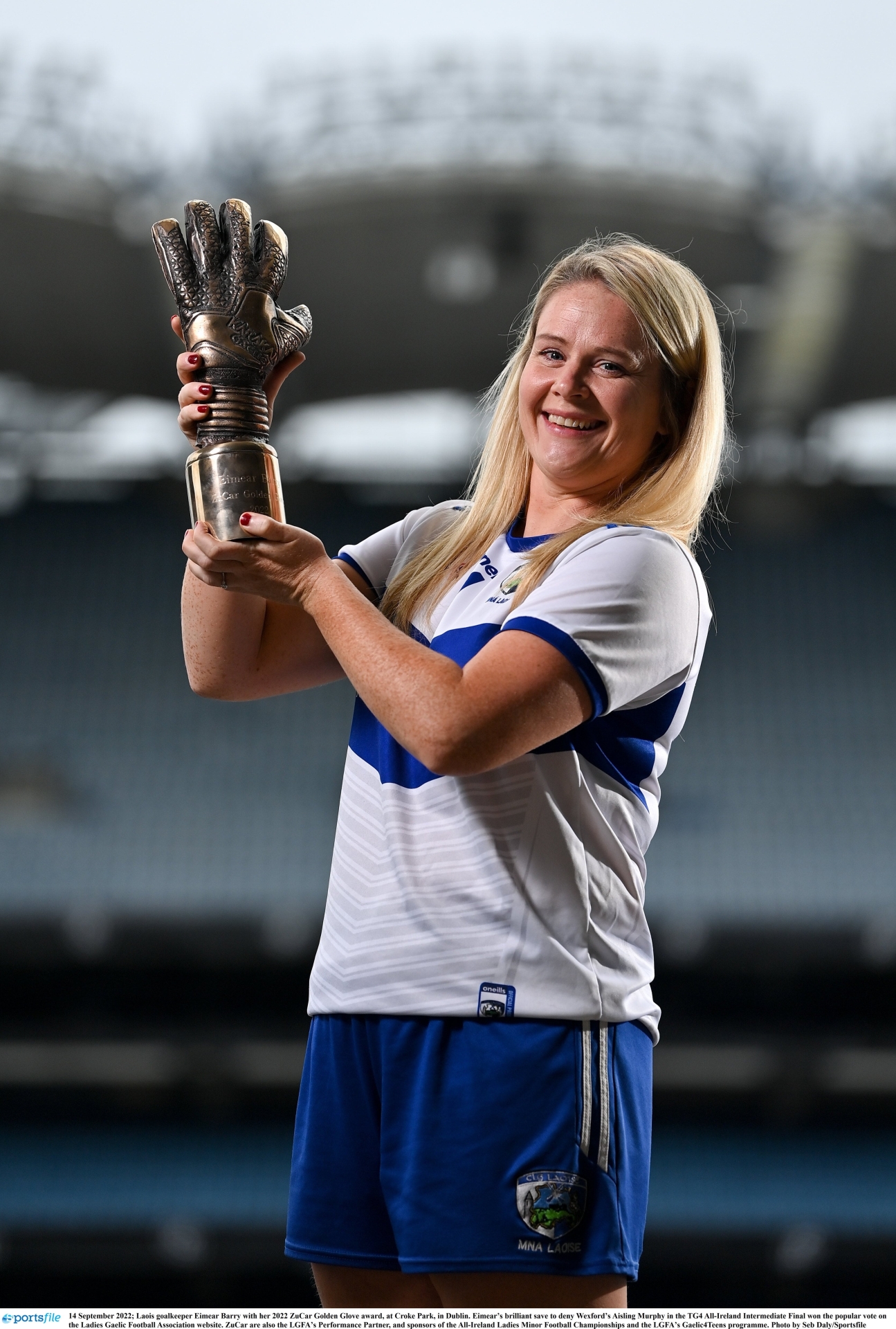 Barry hails from Ballinakill on the Laois-Kilkenny border, a hurling part of the county, but she plays football for the neighbouring Shanahoe. She started her career outfield but a couple of troublesome knee injuries meant she was destined for a life between the sticks.

“I was almost forced to play in goals,” said Barry. “I got my two knees done, my cartilage, and I wasn’t able to play outfield when I came back from the operation. So I went in goals and I have been there ever since. I haven’t been able to get out of them.

“It was only cartilage but it’s sore now as I get older. And especially in the colder nights, it’s definitely sore in the winter. But you just get on with it.

“As I get older, I would stretch a lot more. I would be doing a lot of band work because the muscles aren’t the same as what they were. You have a routine before you go out. But there is nothing to save your knees. The hard ground as well at the minute, it’s quite sore on them. So, you’d think you’re coming out of the colder months but the ground gets harder and when you are falling on them, it's worse then as well.”

Barry eventually made her inter-county debut in 2011, all of 16 years after first playing adult football for her club.
She initially deputised for Caoimhe Dollard before making her first appearance in a team under the tutelage of Joe Higgins.

“We played against Cork down in Cork in the League. Other than that I was behind Dollie (Dollard) in the goals,” said Barry.

“I took a break and then Donie Brennan rang me three years ago and the rest is history. It took one or two phone calls but Donie has a great name in Laois and everybody would hold him in high regard. When somebody like Donie rings you, you have to think about it.

“Covid was on at the time, nobody was going anywhere. I just said I would give it a crack. From the first night I spoke to Donie, I was sold on the idea. There was only one way we were going to go. More below Picture 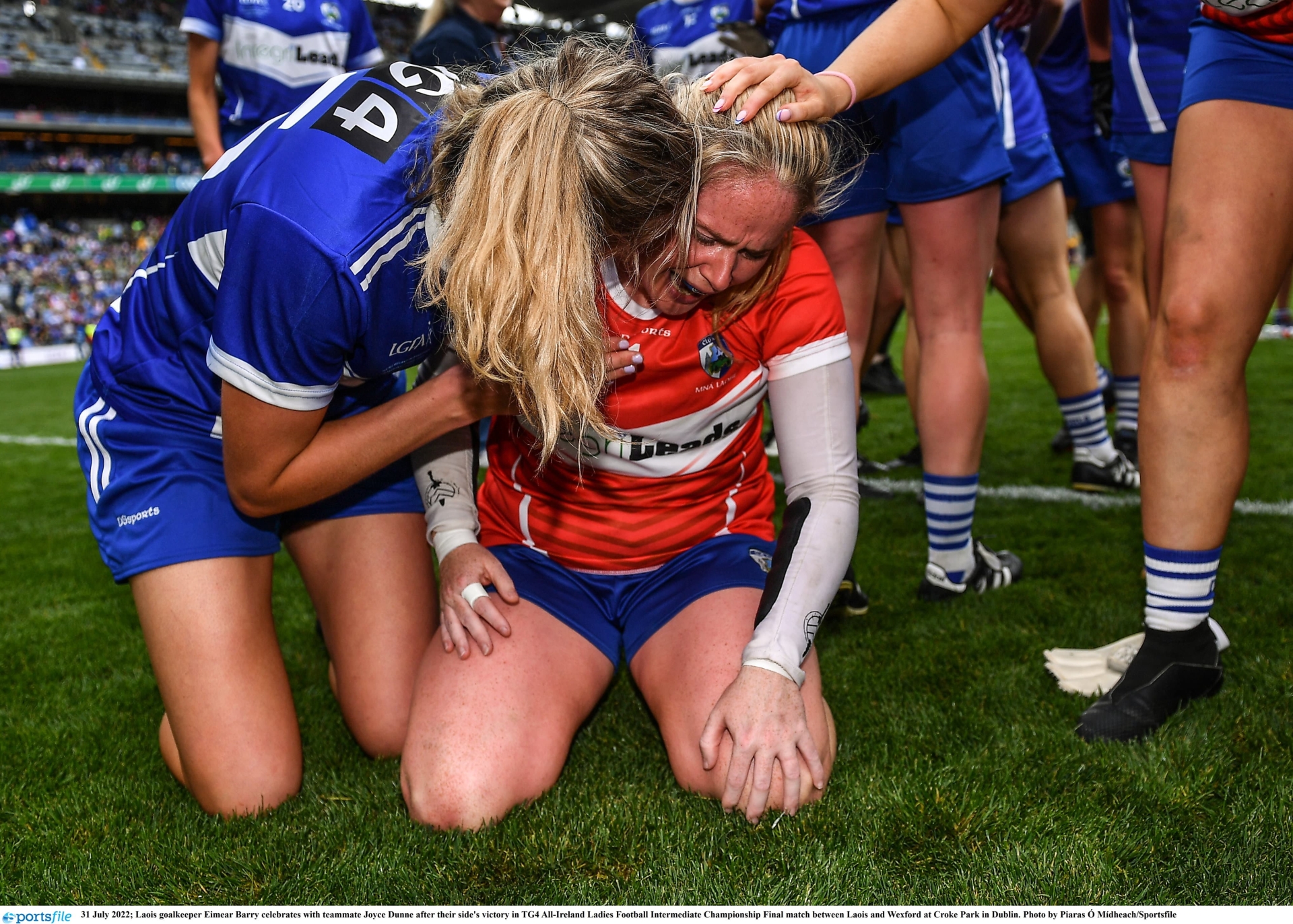 Laois were relegated to intermediate in 2017 and a couple of years later they came within one game of a further demotion to junior. But they survived before Brennan came on board. The resurgence has taken place with the former Laois inter-county star embedding a fresh new outlook and culture in the squad. Many of the players call it a second family, a camaraderie that led them back to senior after their TG4 All-Ireland Final appearance at Croke Park since the 2001 senior decider.

“Family is something we have mentioned over the last two or three years,” said Barry.

“There is a fantastic bond and family is a real appropriate word to use between all the panel. I don’t know if I have ever been involved in a team where we get on so well and there is a great connection between everyone in the panel.

“There is a massive effort and commitment put in by everybody. There is a great age difference between everyone on the panel as well and we all just gel really well.

“I’m the oldest, mightn’t be the most mature, but I am the oldest! I don’t feel like the oldest or anything like that. There are girls younger than me that are probably more mature.

“But we all get on really well. A few of the older girls would like to be role models for the younger girls. But the younger girls are very mature and they row in, they have great heads on their shoulders. It doesn’t feel like I am 20 years older than some of the girls.”

Barry, who is a teacher in Clonmel, now has the unenviable task of trying to keep the Meath and Dublin attackers at bay in Leinster next year. But she cannot wait for a new challenge.

“It will be interesting. There is no point in having any aspirations of being a good goalie without having the likes of Emma Duggan running at you,” said Barry.

“But at training you have Mo, Erone (Fitzpatrick), Emma Lawlor and Sarah Anne (Fitzgerald) and all these girls. They are very competitive. You can see Emma and Erone were playing O’Connor Cup this year. We do have players and panel members that can compete at the higher level.

“You have to be sharper, the pace of the game will be quicker. We had to experience a bit of it when we played Kerry and Armagh this year in Division 2.

“We are not under any illusion that it is going to be a big step up but we don’t want to be a yoyo team.”