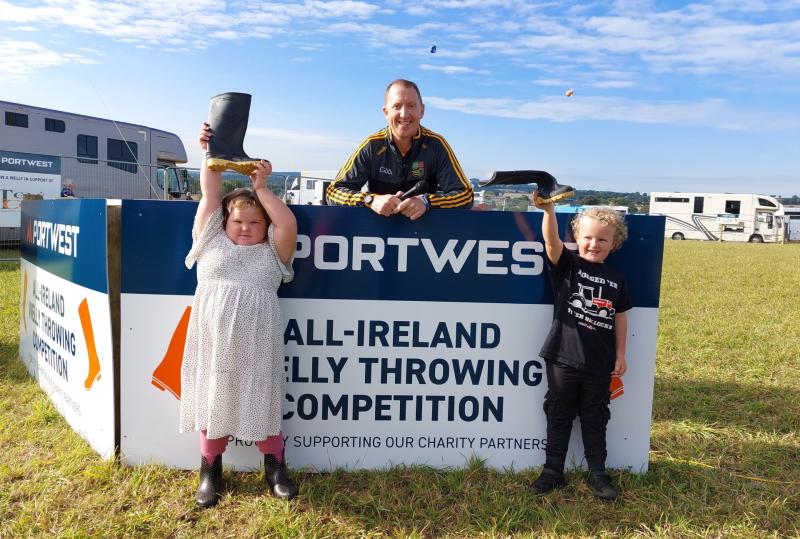 A Laois GAA club is attracting great crowds to a charity fundraiser at the National Ploughing Championships.

The Heath GAA is manning the PortWest Welly Throwing stand, and Laois Allstar Seamus Mulhare is playing a stormer with the banter.

The club members are volunteering their services free for the three days, all to support good mental health for young players.

All the money made is going to the services of Teac Tom suicide prevention service, who have centres in both Stradbally and in Kilkenny.

Philip Keane told the Leinster Express how it came about.

"We contacted Teac Tom to put their logo on the jerseys of our U16 rounders team, because of the work that they do, and the agegroup of the team, to show support.

2022 Ploughing Championships returns with a bang as up to 100,000 expected on first day

"Then PortWest contacted us to ask us to man the welly throwing stand as a charity partner. We contacted Teac Tom and offered to do it for them," Philip said.

Seamus was already going hoarse on day one, such is the effort he is putting into calling the crowds to try throw the welly the furthest. It's €2 a throw or three for €5, with a €100 voucher a day for mens, ladies and under 12s.

"It's a bit of craic. It's going well so far and it's for a good cause," Seamus said.