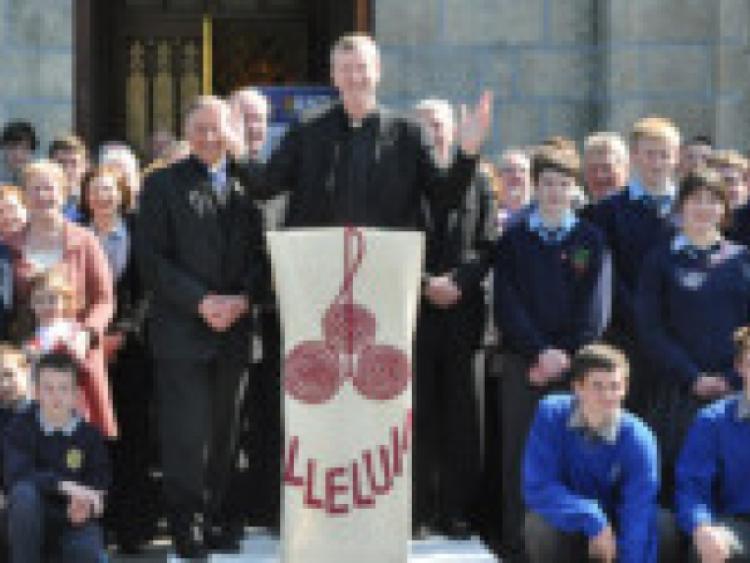 Almost four and a half years after the last Bishop stood down, Pope Francis has appointed a Meath man as Bishop of Kildare and Leighlin.

Almost four and a half years after the last Bishop stood down, Pope Francis has appointed a Meath man as Bishop of Kildare and Leighlin.

Fr Denis Nulty was revealed as successor to Jim Moriarity outside Carlow Cathedral on Tuesday morning. Bishop Moriarty, who was at the Cathedral on Tuesday morning for the revealing of the new Bishop resigned on December 23, 2009. His resignation was finally accepted by the Vatican in April of the following year. The parish has been under the administration of Monsignor Brendan Byrne in the mean time.

Fr Nulty said he was “honoured, privileged and humbled to be chosen by Pope Francis to be bishop for and with the people and priests of this superb Diocese of Kildare and Leighlin.”

At the age of 50, he is the youngest Bishop and at 6’5” probably one of the tallest Bishops too. He is currently assigned to St Mary’s Parish, Drogheda in the diocese of Meath.

He is originally from Slane, where he was born on June 7, 1963. He is the youngest of five children, with two brothers and two sisters and grew up on the family farm. He was ordained in June 1988 and appointed a Curate in the Cathedral Parish at Mullingar where he served for ten years until 1998. In August 1998 he moved to Drogheda where he has remained until the present day.

The Diocese of Bishop and Leighlin is made up of Counties Carlow and Laois along with parts of counties Kildare, Offaly, Kilkenny and Wexford, with a total of 56 parishes.