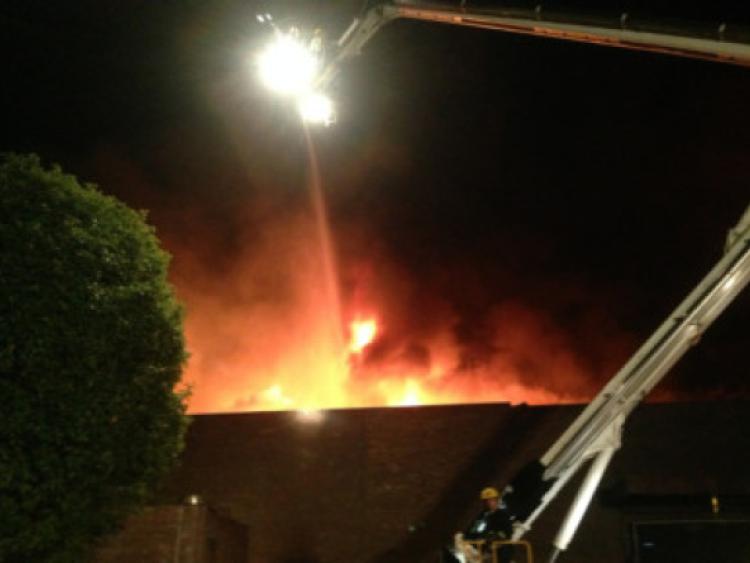 An investigation is underway into the cause of a fire that ripped through the disused Avon factory in Portarlington on Tuesday night September 2.

An investigation is underway into the cause of a fire that ripped through the disused Avon factory in Portarlington on Tuesday night September 2.

Flames lit the sky in the early hours of Wednesday morning, while residents of nearby St Brigid’s Square and Arlington estate gathered outside their homes to watch.

More than 40 firemen from Portlaoise, Durrow, Mountmellick, Portarlington and Newbridge worked throughout the night to extinguish the fire and prevent it spreading.

“It was the biggest fire in Laois in a number of years,” said Assistant Chief Fire Officer Anthony Tynan, who said the building had not been secured before the fire, and that “a lot of timber is still there, door and window frames”.

A smaller fire was extinguished there on August 13.

Nobody was injured in either fire, and no homes had to be evacuated. However people living in caravans beside the site were asked to move for their safety.

“Our job is to try and ascertain what caused the fire in the first place,” he said.

Asked if it was proof that Port was under-resourced by Gardaí, he said they “couldn’t have been much closer”.

“We happened to be very close, doing a checkpoint shortly before the fire was discovered,” he said.

While some asbestos is believed to be around pipes, Port Station Officer Fran Nolan reassured the public that there were no chemicals inside.

“The only dangers were structural, there are absolutely no chemicals. We had that issue over a year ago, and had it checked,” he said.

The EPA say underground water on the site is contaminated by dumped solvents, but that this poses no danger to the public water supply.

The boarded up 12,000 sq metre building does not appear much changed, but an estimated 40 percent of the building has been destroyed.

Arlington Ltd closed in 1999 with a loss of 400 jobs. A security firm are now on site, arranged by NAMA.