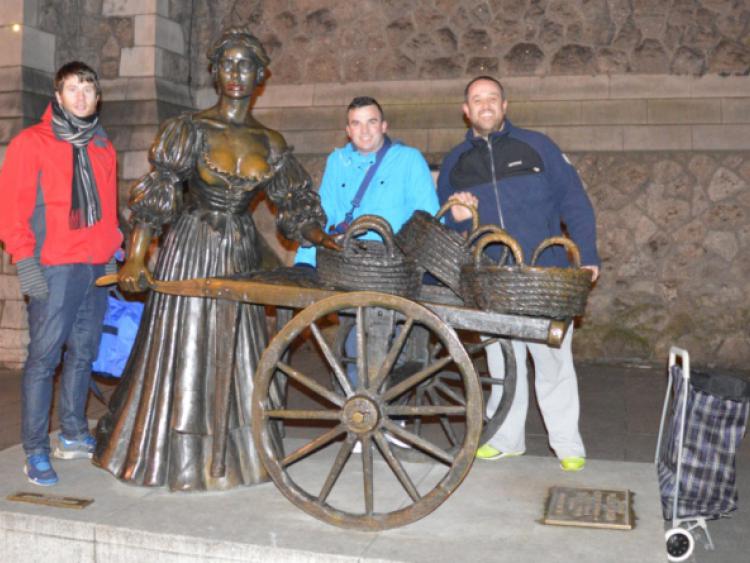 A group of Portlaoise men took it upon themselves recently to bring up hot stew, soup, gloves and hats to Dublin’s homeless.

A group of Portlaoise men took it upon themselves recently to bring up hot stew, soup, gloves and hats to Dublin’s homeless.

They were pulling a lady’s shopping cart, full with over 60 cartons of hot beef stew, and soup, sandwiches, tea and coffee, donated by Jason Lawless from Mountmellick restaurant Enas at the Mill.

They bought hats, gloves and tobacco to hand out, all gone in under three hours.

“It was slow at first, we were in the wrong spots. In the end word had got out, three even ran down the street for stew but we had nothing left. Next time hopefully it will be the same,” said Clive.

People had sad stories to share, including one old man that gratefully accepted a sandwich and cigarettes.

“He asked us if we could give a sandwich to the dog, isn’t that nice? Next Saturday night if I see that man with the dog I’ll have a sachet of dogfood. It makes his life, he had the dog wrapped up, he was looking after that dog, and he turned round to me and says ‘he’s me best friend’, and kissing the cigarettes, it was very sad,” Clive said.

“A lad told us he stays out all night and sleeps all day, because there’s two things happen in a hostel, either robbery or rape. He goes in at nine in the morning and sleeps all day, and this gentleman spoke very well, doesn’t drink, doesn’t smoke, doesn’t take drugs, he just had a gambling problem and ended up on the streets,” said Tony.

One man thanked them as they videoed him.

“Thanks a million, you’ve done a lot for us and I mean that from the bottom of my heart, my name is Carl Boyle,” he said.

His collection cup was empty. The €6 in it had just been robbed.

“He couldn’t hold anything with the cold, his whole body was shaking before we put a gloves and hat on him,” said Clive.

“A girl came up and put her two arms around me and cried ‘I’m 13 years on the street and I need to get off it, I’m going to die on the street’. It wasn’t nice,” he said.

People who didn’t need food, directed them to others.

“I asked one gentleman would he like stew and he said ‘I wouldn’t waste it, there’s a woman around the corner in an apartment, she opens the gates every night at 10.15, lets us down to the carpark and brings down a cup of tea and a sandwich for me and my friend’,” said Tony.

They see that some people are not genuine, telling of one man who heads out of his apartment at weekends to beg near nightclubs, with drunk girls donating generously.

“We had one lad, didn’t want stew, hats, gloves, cigarettes, just wanted money. We won’t give out money, we have to be mindful,” Clive said.

He began helping Dublin’s homeless five years ago, each Christmas bringing up cooked Christmas dinners to a homeless shelter, with the help of Portlaoise restaurants.

The men plan to go up now every fortnight.

“We asked people what they needed, and most of them said socks, and chocolate,” said Tony.

They welcome extra volunteers, and businesses who can sponsor in any way.

“We hope we can get a cart for all our boxes to pull around the inner city with no spillages. People are genuinely interested. It is very fulfilling, living is giving, I know from my own experience as an addiction counsellor that a lot of people are absorbed in their own issues, but a night like that leaves you with gratitude coming home, for what you have,” said Tony.

He wants to form an official charity, which could offer help to local homeless people too.

“We have so many messages from people wanting to come on board now, I think it’s brilliant,” said Clive.

A public meeting will be held above the Paddy Power shop on Portlaoise Main Street at 8pm this Thursday January 29.