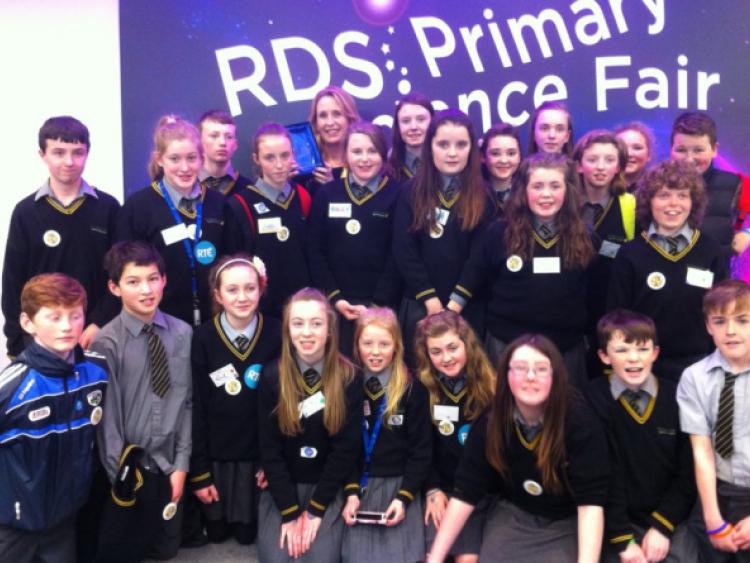 Meditation and the power of positive thinking are not normally associated with children, but pupils of The Heath NS are doing it every day, and have now proven the benefits.

Meditation and the power of positive thinking are not normally associated with children, but pupils of The Heath NS are doing it every day, and have now proven the benefits.

The school have been using calming techniques daily since last September, and such was the noticable reaction that teacher Anita Fennelly decided to use it as the basis of a science experiment for her 6th class pupils.

Last January they exhibited their exciting results at the Primary Science Fair in the RDS, which runs alongside the BT Young Scientists Exhibition, to huge interest from professionals, teachers, parents and students.

“The response shocked me in the RDS, our stand was constantly packed, with lots of teachers, doctors and health professionals particularly interested, in this age of mental health awareness. The students did the school proud, they must have talked to ten or 15 adults each,” said Ms Fennelly.

By comparing the children who had practiced meditation, mindfulness and positive thinking, against a class who had not, the children proved that it improved athletic confidence and ability, and mental concentration in class.

“I hope we do get recognition for it, so that other schools take it up,” she said.

Among the techniques she uses are breathing exercises, visualisation, a worry box, a wishing tree and a calm box.

“The children write their worries and post them in the worry box, I don’t read them. It helps them acknowledge a worry and then let it go. They have an option to tell me worries in another box,” she said.

The children have embraced their new routine.

“They really get into it, sometimes they get a bit emotional, and some have fallen asleep, but they love it. It took the boys a bit longer but before the Cumann na mBunscoll they requested me to do some visualisation with them,” Ms Fennelly said.

“It’s usually just a few minutes most mornings. The whole atmosphere is of well being and calmness afterwards,” she said.

It was the first time for the school to enter the fair.