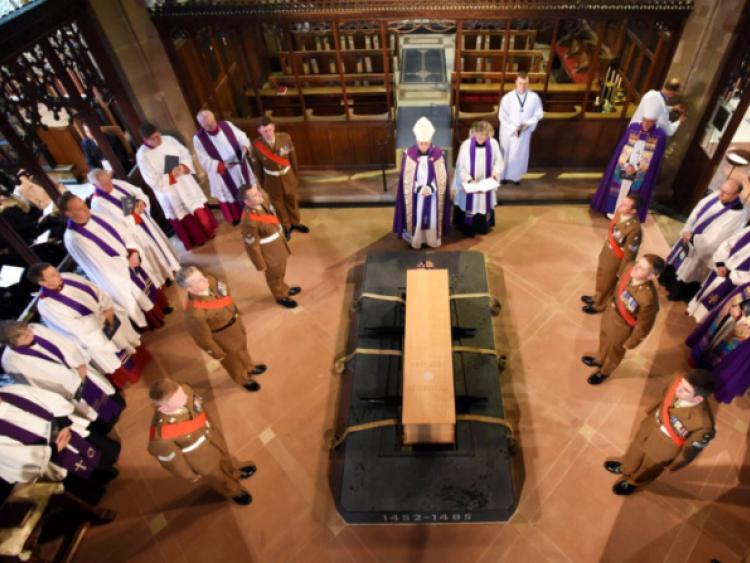 A Laois company has played its part in the historic burial of an English King.

A Laois company has played its part in the historic burial of an English King.

King Richard III of England was the last English king to be killed on the field of battle. He was killed at the battle of Bosworth in 1485 but his body was discovered just three years ago in a car park .

It was then decided to give him the full honours and he is now forever securely entombed in Irish limestone supplied by McKeon Stone in Stradbally.

McKeon’s supplied the stone the two small attachments. The dark stone was quarried at McKeon’s quarry in Threecastles, Co Kilkenny and cut in Stradbally.

It was worked and fitted by Master Mason James Elliott in the UK. Niall Kavanagh is managing director of McKeon’s.

“It is a hugely prestigious project and we take great pride that our stone was selected for this job.

Mc Keon Stone is known to have Europe’s best blue limestone and has been strongly endorsed by the project,” said Mr Kavanagh.

This is not the first historical process that McKeon’s have been involved with in recent times. In 2014 the President, Michael D. Higgins and HRH The Duke of Kent, President of the Commonwealth War Graves Commission, formally unveiled a monumental Cross of Sacrifice at Glasnevin Cemetery to coincide with the centenary of the outbreak of hostilities in the Great War and to commemorate the many thousands of soldiers from Ireland who died in World Wars I and II.

The Stradbally firm has also been involved in the supply of stone for memorials in Belgium.

McKeon Stone is the last remaining Irish owned and managed limestone quarry on the island.