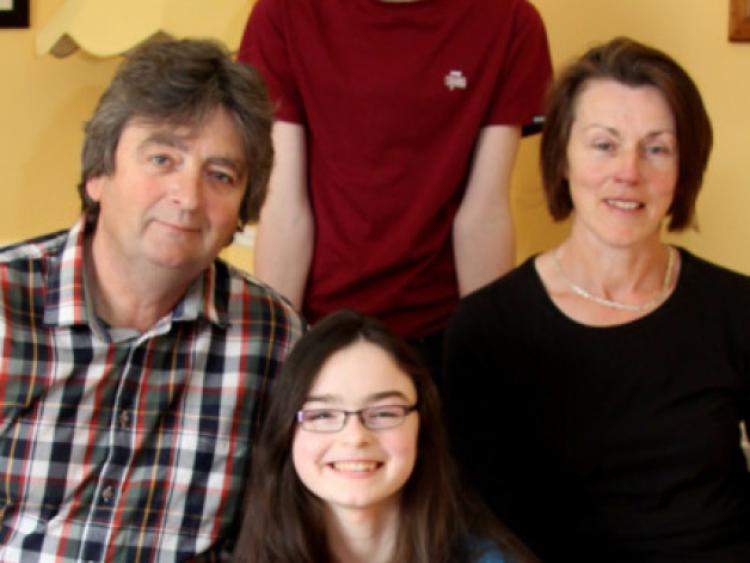 A Portlaoise teenager has had her life totally transformed following spinal surgery in America three years ago.

A Portlaoise teenager has had her life totally transformed following spinal surgery in America three years ago.

Before the surgery, April, who has cerebral palsy, faced being confined to a wheelchair, now she dreams of going to college later this year.

The 18 year old, who is currently sitting her Leaving Cert in Scoil Chríost Ri, was only the third child from Ireland to have the spinal surgery in America. The surgery - Selective Dorsal Rhizotomy (SDR) - which is only available to young children in Ireland, involves cutting some of the sensory nerve fibres that come from the muscles and enter the spinal cord, releasing the spasticity in the legs.

“The Irish system was doing nothing for April, because they only perform the surgery on younger children and April was now considered too old,” her mum, Sheila explains.

“Then she saw an article in ‘Take A Break’ magazine about the surgery and the surgeon Dr Park in St Louis Hospital in America. We researched it before deciding to go for it.”

April and Sheila sent videos of April, along with all her x-rays and scans to the American doctor before she was approved for the surgery.

Sheila continues: “Before the surgery April had very bad hip pain, now she has no pain at all. She would have ended up in a wheelchair permanently, but now she doesn’t use the chair at all. She walks with two sticks.”

“My pain level is non-existent now. I can walk with straight legs and my heels flat on the floor. I still have a daily physio routine and I see a special physio in Limerick, but I’m gathering strength,” April explains.

“I’d like to do arts in UCC, but my mam is already freaking out about my level of mobility. Before the surgery I would have needed help showering, but now I only need a PA for some things.”

The family spent five weeks in St Louis, which included three weeks of physiotherapy provided by the hospital.

April still has a daily physio routine to strengthen the muscles in her legs.

Earlier this year, April, along with other pre and post op patients, met with neurosurgeon Dr TS Park, at an Irish SDR Party in the Red Cow Hotel, earlier this year.

“It was great to meet Dr Park again and to meet other pre and post op patients and offer them some guidance and information on the surgery.

“Dr Park was delighted with my progress. He said it was all down to my hard work with physio and my mam and dad,” April said.

April, who was the senior award winner for English at her school’s awards this year began writing a blog, or online diary when she went for the surgery.

At first, it was a way for her to keep in touch with family and friends while she was in St Louis but over the years it had become much more and her blog has now been viewed by over 10,000 people.