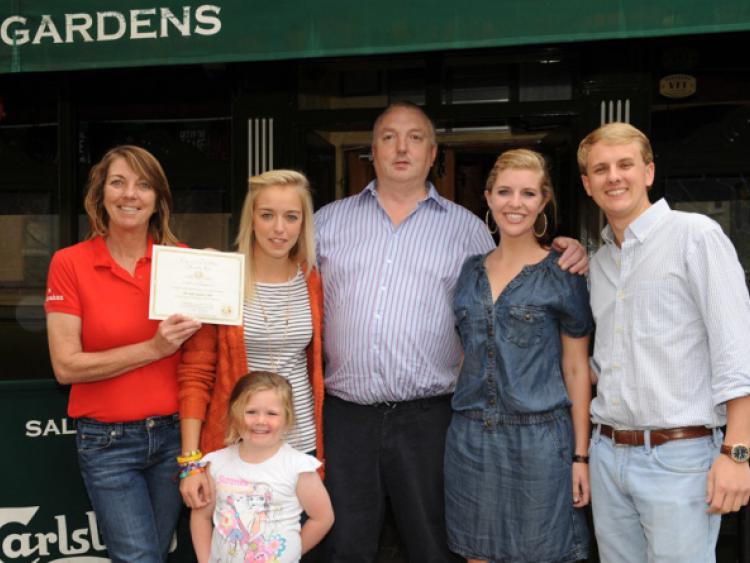 She may have been asked for her hand in marriage, live on stage at the Rose of Tralee, but it was Sally Garden’s pub in Portlaoise that really captured her heart.

She may have been asked for her hand in marriage, live on stage at the Rose of Tralee, but it was Sally Garden’s pub in Portlaoise that really captured her heart.

Molly Molloy Gambel was twinned with the Portlaoise pub during the Rose of Tralee Regional Finals and became good friends with the owner John Holmes and his niece Shauna Bull.

“I was twinned with this pub during Regionals and we spent a lot of time here,” said the New Orleans Rose.

“They came to support me in Portlaoise and they also travelled down to Tralee last week.”

Molly Molloy was proposed to live on stage by her boyfriend Kyle Catlett.

“I never imagined I would be proposing on national and international TV with all our friends watching live.

“Molly’s family were waiting backstage in the greenroom with champagne.”

Mr Holmes and his pub have also received a certificate of recognition from the Mayor of New Orleans in honour of the gracious hospitality they showed Molly and her family during the Regional Festival.

“We just spoke highly of Portlaoise and Sally Garden’s. Every evening Molly’s mum, grandmother and I would come in here for a few drinks. We told everyone back home they would have to visit Portlaoise,” Kyle explains.

Molly Molloy’s family have already travelled back to New Orleans, but not before stopping off in Portlaoise first.

“We had a big party with Molly Molloy’s family here last wee kand we were delighted Molly Molloy and Kyle went out of their way to stop here today,” John said.

“We’re big supporters of the Regional Festival every year.

“We are delighted and honoured to be part of it but this year was made extra special because of Molly Molloy.”