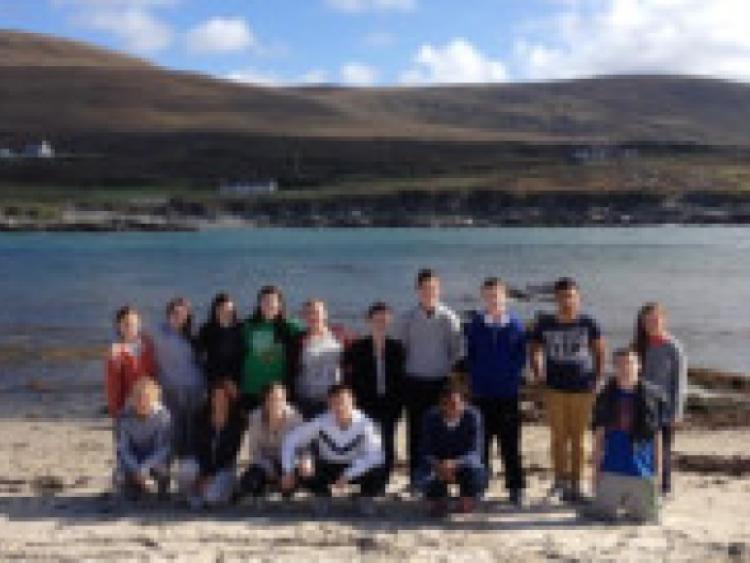 On Tuesday September 30, the Transition Year class headed to Achill Island for an overnight bonding trip, leaving the school on a bus at 7am.

On Tuesday September 30, the Transition Year class headed to Achill Island for an overnight bonding trip, leaving the school on a bus at 7am.

We travelled for three and a half hours to be greeted by the Gaeltacht in Achill Island after stopping in Roscommon for our lunch. When we arrived in Achill, it was around half 12. We were given sandwiches and juice to fill our stomachs for the upcoming activities.

We then drove to the changing rooms where we changed into our wetsuits.

The first activity in the Gaeltacht was a surfing lesson. We learnt how to catch a wave and surf it. We spent about 2 hours surfing before returning back to the centre. After that they got on the bus and went to and visit their bean an tí’s houses. After the bean an tí fed us, we all met back on the bus and went back to the changing rooms. When we arrived we got changed into our wet suits and headed for the bog.

When we reached the bog we had to jump into a trench full of bog water, We had to swim to the other side before the other team. After that, we had to help each other to climb onto a pole in the trench.

When we got out of the trench we had a choice to jump another trench full of bog water but it was a higher jump and none of us knew how deep it was so some of us went ahead and jumped in but some were scared to.

After that, we went down a slide into a lake. Again some of us slid down the slide but then some of us walked down the and jumped into the lake. The lake was really cold at the start but we got used to it.

Ms Walshe played the role of mammy to many of the girls in the lake and helped to wash out the bog that was in the girls hair, It looked very funny because it looked like she was baptising them!

We then headed on the bus soaking wet and some of us still had bog in our hair and ears and even places we didn’t know it could be.

We headed back to our Bean an ti’s house to get showered and change into a new pair of clothes. At half 9, we were collected by the bus and drove down to the main hall of the Gaeltacht.

We played a small game of soccer and messed around with a basketball. We watched as Mr Hally showed us his (as he calls them) trickshots.

We then sat down and ate too many sweets while getting to know each other as best as we could. We left to go home at around half 11 and we slept for the night!

The next morning we were woken up at 8 am by our Bean an tí. We got breakfast, packed our bags and the bus collected us at around 9am.

We then went cliff diving and this was by far the best experience of the trip! When we got into our wetsuits, we were given a life jacket and travelled to the cliffs.

We had to get out and walk across a field to get there. We made our way down a walkway (which was made into the side of the cliff) and belly flopped into the ocean.

We then took turns jumping off of trips which gradually got higher. The adrenaline rush was amazing!

We then went back to the hall and got lunch and began to make our way home. The trip was amazing.