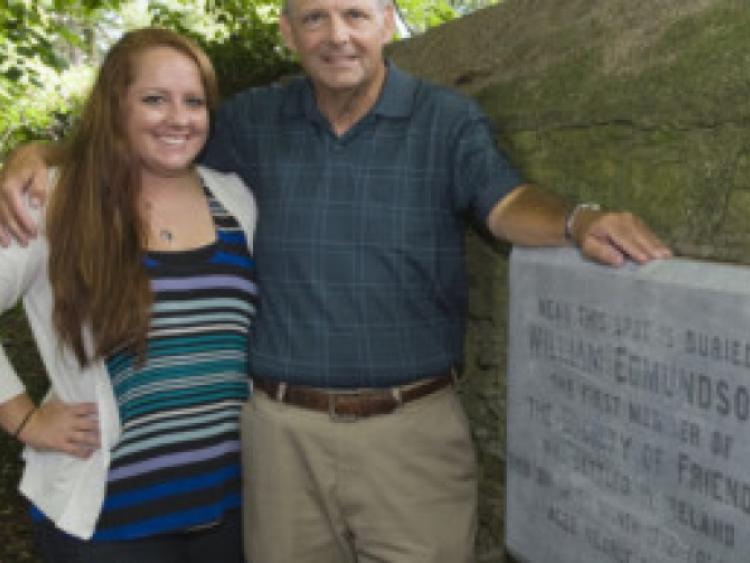 The extraordinary seventeenth century story of the founder of Quakerism in Mountmellick has brought strangers from different sides of the Atlantic together in Mountmellick.

The extraordinary seventeenth century story of the founder of Quakerism in Mountmellick has brought strangers from different sides of the Atlantic together in Mountmellick.

Mr Edmundson donated a first edition (1715) copy and a second edition (1774) copy of the Edmundson journal, and Mr Chapman donated his grandmother’s copy of the centenary commemoration booklet produced at the Friend’s School (now the Community School) in 1886.

While the American was learning about his ancestor, Mr Chapman said he found himself inspired by the journals of William Edmundson during the Troubles.

Local historian Roy Meredith outlined the history of Quakerism in Mountmellick and told the story of how William Edmundson and his two sons William and Samuel were kidnapped by a lawless band of rebels who threatened to kill the three men.

Ross Champman said Edmundson’s reaction gave him inspiration during the Troubles, when he wondered if he should run away or stand his ground.

Samuel Edmundson was the seventh great grandfather of James Edmundson who spoke movingly of his journey to Mountmellick and his connection with Dolores Dempsey at the MDA.

She invited him to Ireland to hand over the books, and this led to a Gathering event.

James Edmundson spoke emotionally of travelling in his ancestor’s footsteps, of waiting thirty years to visit Mountmellick, and of the special four days he spent in Mountmellick and Rosenallis with his daughter Erin.

He was presented with a piece of Mountmellick embroidery and some local history books, and Paul Dempsey said he was proud to accept the artefacts on behalf of the MDA.

He said the artefacts will take pride of place in the museum and will be carefully looked after.