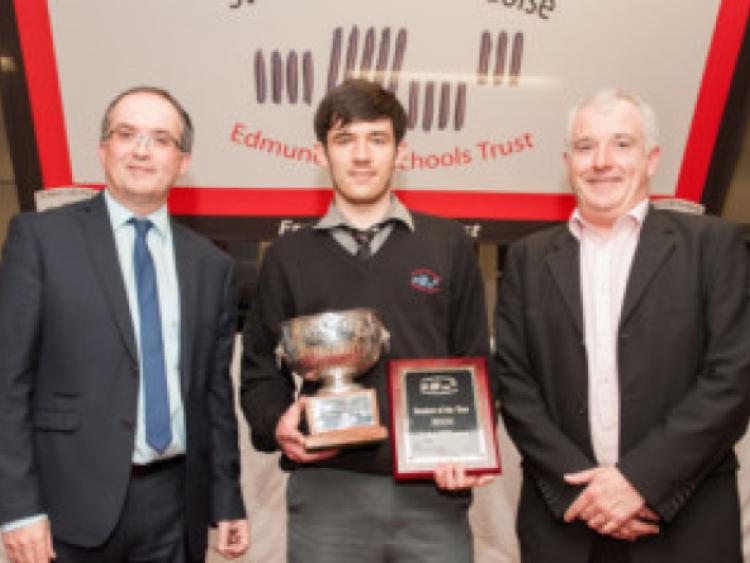 Irish rugby player Sean O’Brien and local businessman and past pupil Kenneth McPherson were the special guests who were welcomed by Principal Tony Brady. Deirdre Carroll organised and was MC.

Many students gained awards in science fields of study. Special mention must goes to Luan Fletcher Calt who entered an online coding competition with his class, from it he was invited to Google headquarters where he competed again, gaining second place in Ireland for his endeavours.

Two new societies were invited along for recognition of their work under Ms Buckley – Amber Flag and Amnesty International. Members of Amber Flag recently joined the Cycle Against Suicide for a 40km stretch, all part of their drive to promote positive mental health. Leadership skills were also awarded to members of the Student Council and Meitheal.

In sports, four students Thomas Martin, Matthew Doyle, Jordan Overton and Mick Carroll were awarded for their All-Ireland success’ in Swimming. Eoin Carey and David Mulhare were voted Junior and Overall Athlete of the Year with Niall Doran and Joe Walshe picking up similar soccer titles. PJ Daly, Aaron Bergin and Eoin Phelan won U14, U16 and Senior Hurler of the Year while Charlie O’Brien, James O’Conner and Daniel Delaney picked up similar titles in football.

The basketballers were represented by two teams, U14 and Senior. The U14 were Regional Final Winners with Mail Ikpomwen nominated as MVP. The Senior team gained a regional title and proceeded to gain a bronze title at All Ireland level. Cedric Bamba and Conor O’Donovan were recognised as Most Improved Players while Jack Dooley received a well-earned MVP.

Two diverse disciplines were also lauded, fly fishing and cricket. Eoin Buggie won second place in the World Championships in 2013 while Omar Rasool has just returned from a Jamacian tour with the Irish and Leinster cricket squad.

A highlight of the evening was Sean O’Brien’s address. He highlighted the importance of hard work in achieving one’s goals. He also pointed out to parents how pressurising children does not work and he urged students to talk to someone if they felt down.

Entertainment was supplied by two couples from the CBS’ extremely successful fundraiser for the forth coming Zambian Project. A slice of the action was replayed to the audience followed by a small presentation and a live performance from Willie Dunne, Breda Delaney and the winning entrants Peter Duignan and Zita O’Reilly.

Willie Quinlan, retiring after 36 years on the staff, was pleasantly surprised with a snap shot of his time in the CBS (compiled by Pauline McCormack). He received a double crested medallion as a fond farewell from his students.

The evening closed with the presentation of the three big prizes. The Martin Conroy (most helpful student) went to Kieran Marshall, fixer of many IT problems in school. The consistently successful David Mulhare was nominated Sportsman of the Year, while Cathal O’Conner scooped the coveted Student of the Year trophy.