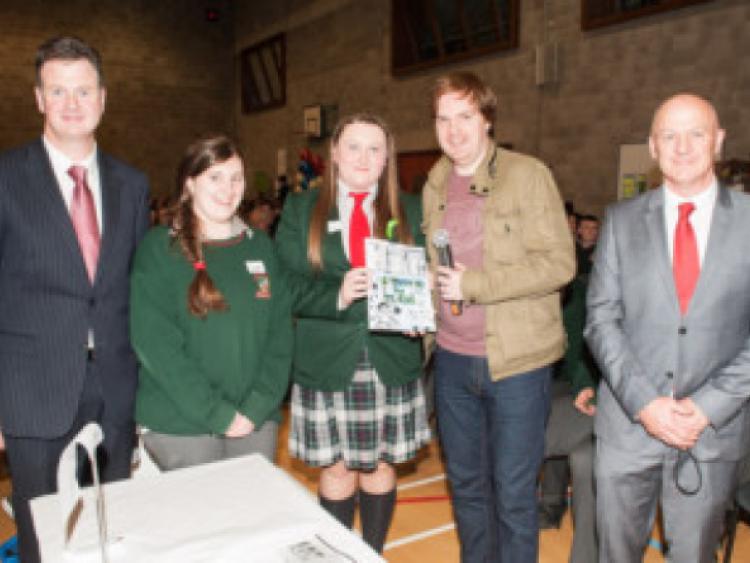 Portlaoise College Awards Ceremony was larger and better than ever with this year’s Guest of Honour Bernard O’Shea – well known Comedian and new 2 FM Breakfast Show Host, adding a lot of humour.

Portlaoise College Awards Ceremony was larger and better than ever with this year’s Guest of Honour Bernard O’Shea – well known Comedian and new 2 FM Breakfast Show Host, adding a lot of humour.

At this year’s Awards, there was a lot of celebration following what was a highly successfully year for its students. The year got off to a great start with the school taking the top spot in the town for percentage of students going to third level.

This was followed by a successful Musical “Fairytale Twist”; winning the County Debating Final, two All Ireland wins in Volleyball, a Leinster Under 14 Final win in Football and as recently as two weeks ago, the school brought home the Best Design Award from the O2 in the Juke Kouture Final.

The night started with a Performance by the Junk Kouture Final Winner followed by the Principal –Mr. Daly’s opening address where he made reference to the fact that Bernard O’Shea was one of his past pupils.

First up were the Sports Awards which included Awards in Football, Volleyball, Basketball, Soccer and Hurling.

Next to follow were the Subject Awards in both Junior and Senior categories. Then Bernard O’Shea along with the Principal, Mr. Daly took some time out to talk to the students at the extra-curricular Display area. This also included a short video on the trip to Gambia by the senior students earlier in the year.

The final presentation on the night was Tutotorial and Student of the Year Awards, Prefect Awards, with Lauma Stall winning the Exceptional Student Award and Colin O’Connor, winner of the Leadership Award.

The winners on the night were Arsalan Ahmad Malhi and Elizabeth Jakobsone who each received €1,500 towards third level fees.

Bernard O’Shea then addressed the packed sports hall before the Head Boy and Head Girl made a presentation to him of two special commissioned Leinster Rugby Jerseys – one for Bernard himself and the second one for his new baby daughter Olivia.

The celebrations continued with the serving of refreshments and an opportunity for students to have photographs taken with Special Guest - Bernard.