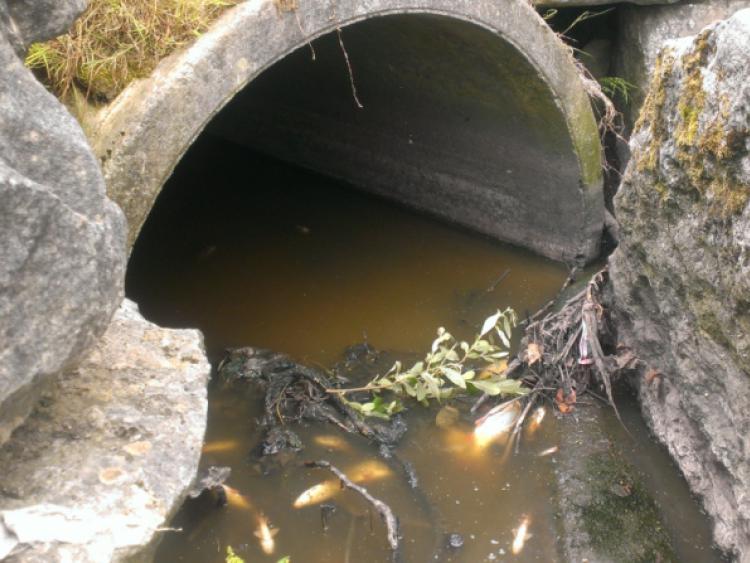 An estimated 150 fish died from lack of oxygen last week in Kilminchy lake, which was ‘never designed’ for fish, according to Inland Fisheries.

An estimated 150 fish died from lack of oxygen last week in Kilminchy lake, which was ‘never designed’ for fish, according to Inland Fisheries.

Fish began dying in the largest of the housing estate’s three lakes on Monday morning July 6.

“It was a shock to see them on Monday morning. Fish were all swimming to the surface, I presume to get oxygen as they were dying. I have been here 12 years and have never seen fish dying,” he said.

The three ‘attenuation’ lakes were built in the 750 housing estate, to collect drainage water, with fish added later by residents.

An Inland Fisheries expert visited the lakeside, and says if consulted, it would have advised against adding fish.

“This is an unnatural system, it is too shallow, with little or no flow of fresh water. A lot of nutrients and pollution settle on the bottom. During lower rainfall, higher temperature and wind this gets stirred up. The oxygen levels dropped significantly below the levels fish need to survive, to almost zero,” he said.

The dead fish are mainly roach, with some stickleback and a pike. The lakes are also home to ducks and swans. Their waste added to the water pollution the expert said.

Laois County Council are testing samples. In 2008 the lake was repeatedly polluted with oil and diesel, costing over €100,000 to clean up.