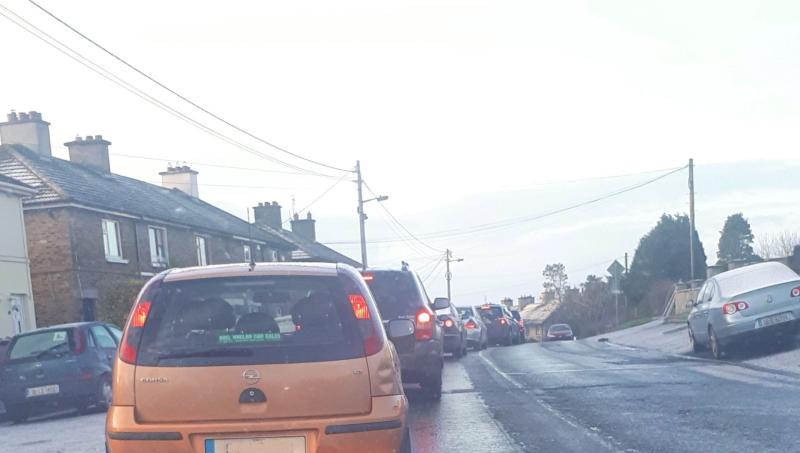 Traffic on a standstill on the icy Borris Road this morning January 17 after 9am in Portlaoise.

Laois County Council management has dismissed as "myths" local claims of ungritted roads in Portlaoise this morning during icy conditions.

Cars slowed to a standstill around the town at rush hour this morning as drivers encountered widespread icy roads.

Responding to a reported slew of complaints on social media, Director of Services Kieran Kehoe said he was glad to be "given an opportunity to dispel the myths" that Portlaoise roads were not gritted overnight.

He said that the gritting machines were out at 3pm yesterday, 8pm last night and then again at 8am this morning.

However he said that because rain was forecast during the night, not gritting was done because it would have washed away the salt.

"The duty engineer monitored the situation overnight. From 3am on, they couldn't salt because rain was due, it did come, but unfortunately some fell as snow and did freeze," Mr Kehoe said.

"They went out as soon as they were assured the rain was finished," he said.

"That was the situation nationally. That's the facts that occurred overnight," the director said, who is in charge of transportation for Laois, as well as being Town Manager for Portlaoise.

He was responding to Cllr Catherine Fitzgerald at the Portlaoise Municipal District meeting this morning.

She said she was "inundated" with complaints by the public.

"Marian Avenue and Abbeyleix road, was it salted yes or no? I was working there last night and I saw no lorry," he said.

Engineer Wes Wilkinson responded that roads were done "in line with winter maintenance plan", which includes roads around Portlaoise urban area. He said that additional salting was also done. However he said he could not confirm if the queried roads were included "off the top of my head".