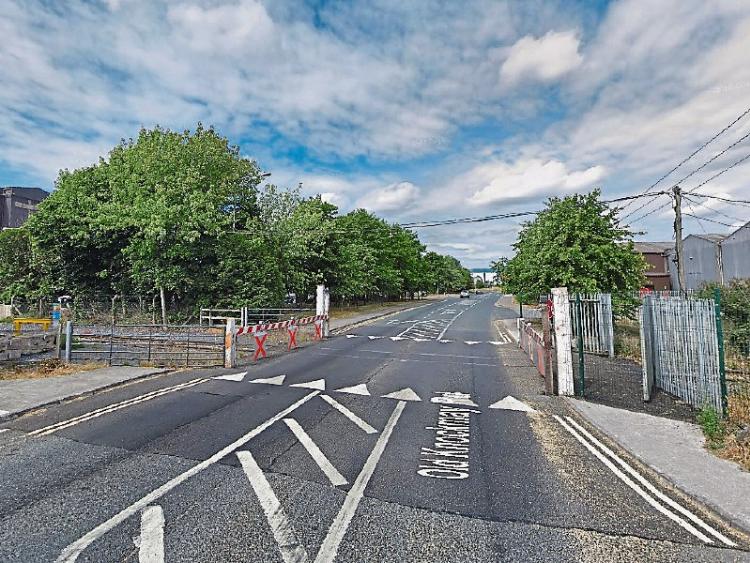 The level crossing on the Old Knockmay road in Portlaoise which has no footpaths.

A long requested footpath is to be built across the railway line on a busy road in Portlaoise early in 2021, but it will still not be safe, say councillors.

Pedestrians on the Knockmay side of the Old Knockmay Road road will have to cross the road to cross the rail line safely on the new path. The road joins with a new link road around the town so it has become increasingly busy with passing traffic.

Laois County Council has now agreed to consider a Compulsory Purchase Order on Irish Rail so it can put a path on both sides.

An update was given at the November meeting of the Portlaoise Municipal district.

Town manager Simon Walton said that Irish Rail has signed an agreement to allow a path on one side only, after a four year wait by the council.

Councillors were disappointed that there will not be two paths.

“I thought it would be on both sides. We have to protect people walking on that side of the road as well,” said Cllr Willie Aird, who has tabled several motions for a path, most recently last month.

“At first I thought it was brilliant news but now I’m disappointed. The whole point was safety. I think it could make it more dangerous,” agreed Cllr Catherine Fitzgerald.

Mr Walton agreed to look into it.

“Anything can be CPO’d. I’m happy to come back to you on that,” he said.

He said that two paths were the “ultimate solution”.

“We all share the same concerns about road safety. There is no question that having a proper footpath and cycle track is undoubtedly the preferred option. With one side we can demonstrate it can work well and we can pursue it with Irish Rail. On the positive side, we couldn’t get any agreement for years, now we have 50%,” he said.

The agreement follows a motion tabled to last month’s meeting by Cllr Aird asking for a path and bicycle lane over the rail line.

“This is going on 12 or 14 years. How long more do the people of Portlaoise have to suffer at Knockmay? Is it nice to see children on a busy road get off their bikes onto the road, and people with buggies step out onto the road? We don’t complain when without warning they close the crossing gate at Knockmay. Surely there should not be some respect for the people in this area. It is mind boggling,” he had said.

Irish Rail responded to the Leinster Express to say that a Licence agreement for a path has been in place since last June, and that Laois County Council will install gates at the crossing.

The spokesperson also said that Irish Rail was awaiting details on insurance from the local authority.

A Road Safety Audit was completed recently as a first step to provide safe cycling on the road which joins the N77 to Clonminam and the new southern circular route.

The council described it as “a busy intersection of road with a considerable number of mainly commercial entrances, right turning lanes, traffic calming islands, a railway crossing and a public road with a high volume of heavy goods vehicles”.