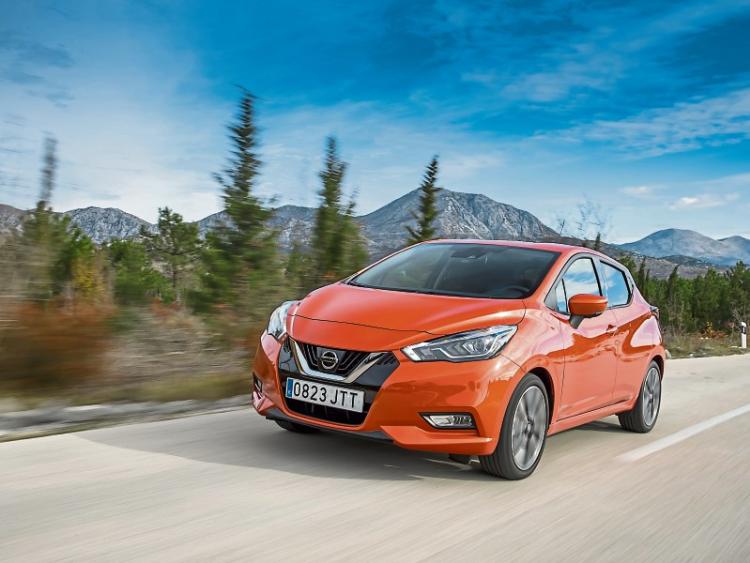 The new Micra is all grown up and more mature, and it would want to be, because it is here to replace two strong selling cars in the Nissan range.

Out, as you would expect, is the old Micra range. With it will go the popular Note as Nissan back new Micra to do serious business.

The Micra is what Nissan describe as a brand amplifier with strong name recognition and a 30 year heritage. Micra has served the company well in Ireland, with 111,000 unit sales since it was introduced in the early eighties.

At the height of its reign, between 1992 and 2002, Micra sold over 50,000 units here. It commanded huge loyalty among buyers who loved it for a variety of reasons, including reliability and low cost of ownership.

New Micra, with bold new looks and options in terms of features and personalisation combinations, is a different animal.

Nissan here back it to claim the 2,600 plus unit sales is has to hit to match old Micra, plus the Note.

Right now Nissan in Ireland is enjoying significant growth in what is a depressed market, with sales of the Qashqai and X-Trail doing particularly well.

They are going for a big hat trick with new Micra, which is aimed at a younger audience than its predecessor.

In the rest of Europe the Micra is seen largely as a city car.

That was never the case here, and it most certainly won't be with what is a bigger new car that should broaden its appeal to young families and those who like their car to have 'a look' that expresses individual taste.

That is what 65 exterior and interior personalisation combinations offers!

One drove the 0.9 litre petrol with the high end SVE grade - it had added options of Around View Monitor and interior personalisation - at the Irish launch recently, and it was a smart looker and performer.

Even with the smallest engine available it carried itself well, without any fuss from under the bonnet even at top end motorway driving.

And the boot space at 300 litres was a nice step up from a competitor I got out of to drive Micra, so it scored well on that front too.

One of the new safety alert features one liked in particular on the car driven was a vibration that tingled through the steering wheel if you strayed across the middle or hard shoulder markings on the road.

It is a nice new take on an old idea.

And just to prove you can have it all, or close to it, if you want to pamper yourself at this end of the market, Nissan are offering an optional BOSE Personal audio system, a world first for this type of sound system in a car.

The BOSE sound system uses six strategically placed speakers, including two in the driver's headrest, and comes at a cost of €500.