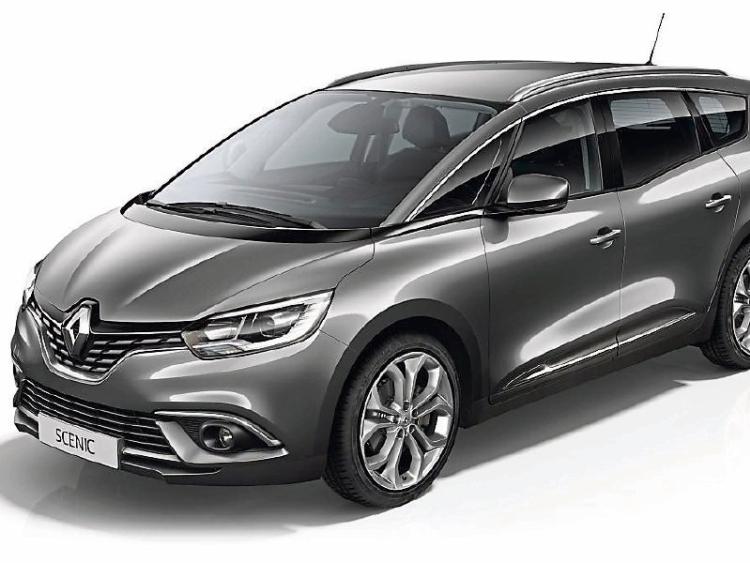 Renault were the founding fathers of the MPV or Multi Purpose Vehicle. However of late the popularity of the SUV with buyers has meant that the MPV is rapidly losing out.

Renault however believe that he MPV still has some life left in it and that by beefing up the styling of the popular Scenic and Grand Scenic to make them a bit more SUV-like in styling terms they will continue to sell.

So at the beginning of this year they launched the new Scenic and Grand Scenic.

Engines include a 1.2 litre petrol or a choice of 1.5 or 1.6 dci power plants with a variety of trim levels.

This week I am road testing the new Grand Scenic

I must say it does.

The front and side view are best from the rear its not so attractive in my opinion.

As an MPV then yes it has street cred?

The huge sweeping dashboard houses a centrally mounted portrait layout touchscreen and the digitally generated instrument cluster has the option of switching the display to a style that looks more analogue, or sport, with a central rev counter at the push of a button.

The functionality of the touchscreen is however rather slow at times and the sub-menus are not very intuitive.

It is of course packed with goodies too numerous to mention here, but Sat Nav with live traffic updates, Bluetooth, keyless entry and start, auto locking and opening and even a one touch system in the central display to lower both rows of rear seats.

You get the idea!

MPVs are all about versatility and accommodation and the Grand Scenic attempts to offer both.

Up front things are great, it vast, try out the middle row though and adults will find that the high floor leaves your knees fairly high up which is somewhat uncomfortable over long distances.

The two tiny rear seats are just that, tiny and only suited to kids for short distances.

However when occupied you need to push the middle row forward which leaves adults knees touching the back of the front seats.

So for me its a let-down in the accommodation stakes despite its size.

With all seats in place there is a very small stage space behind the last row but thats it.

What Is under the bonnet?

Powered in this case by Renault’s tried and tested 1.5 dci 110 bhp diesel mated to a 6-speed manual performance is adequate.

The Grand Scenic is pretty big, softly sprung with somewhat vague steering so the answer is its set up for comfort and cruising rather than being something you will really enjoy driving.

Refinement levels are generally good though I did feel there was rather more wind noise than I expected at times.

All in all though the new Scenic does a good job on the road and manages to transport families smoothly and safely.

What is the final Verdict?

I am a little disappointed at some things that for me should be perfect. After all as the pioneers of the MPV Renault have had over 2 decades to evolve the product.

The poor legroom with the last row of seats occupied is an issue in this seven seater as is the slow response of the central touchscreen and its cumbersome sub menus.

Rivals are better in these areas.

Overall then those comments aside the new Grand Scenic scores well in terms of style, specification and decent economy.