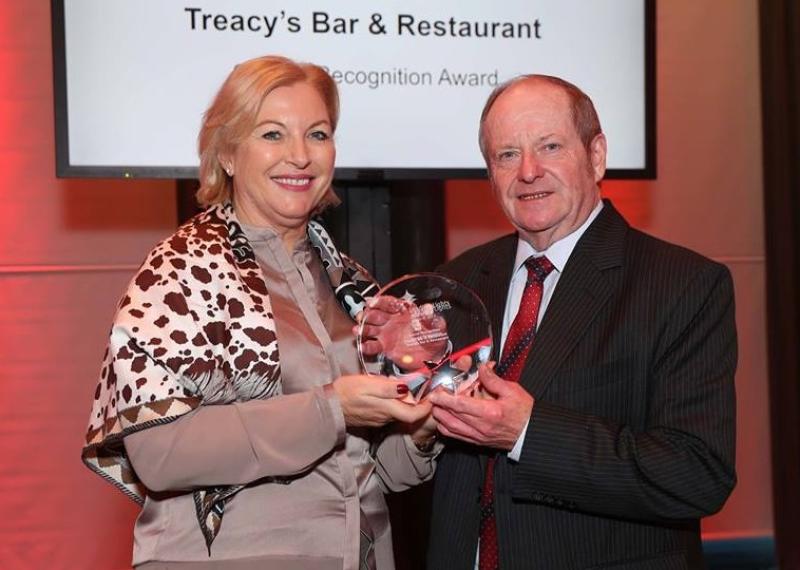 Liz McManus of the Road Safety Authority and Tommy Treacy.

A popular Laois pub has won a special award for free mini-bus service which the Road Safety Authority says 'stops drink driving and may save lives'.

RSA chaiperson Liz McManus presented Tommy Treacy with the ‘Special Recognition’ Award for the service he provides at well-known thatched bar and restaurant on the old Dublin-Cork/Limerick road at The Heath, Portlaoise.

Treacy’s is just 5kms from Portlaoise but is not served by public transport. For nearly a decade the pub has provided a free taxi service to all customers within a 12kms range. Their 8-seat mini bus is PSV licensed and insured.

"This service has undoubtedly stopped drink driving and in turn may save lives," said the RSA citation.

Speaking to the Leinster Express Tommy said he was delighted to accept the award. He said the service operate seven days and may do more than one run a night. Tommy himself gets behind the wheel himself but also has a driver.

While he believes many people 'don't take the chance anymore' to drink and drive, he says the free service stops people taking the chance and 'make all the difference'.

He started the service because he saw that there was a need, especially with the restaurant side of his business, where groups of people might be looking for transport.

Tommy said the investment is significant in the service. He said the insurance is €3,000 a year alone. This year he invested in a new bus which cost €40,000. A hackney licence is also needed.

"We wouldn't be able to run it if we didn't have a thriving restaurant business," he said.

Tommy does not think a public transport service for pubs in rural areas would work. He believe publicans would be encouraged to run such services like his if they were to get VRT refunds and some relief on the insurance.

He said a lot of rural pubs now only open two to three nights a week and added that new drink driving restrictions was harsh.

Treacy's were among 25 individuals and organisations were honoured for their commitment and dedication to road safety at the tenth annual ‘Leading Lights in Road Safety’ Awards which were presented by RSA Chairperson Liz O’Donnell and RSA Chief Executive Moyagh Murdock in Croke Park today. MC for the day was RTÉ News Correspondent Teresa Mannion, with awards presented in categories including media, education, business, emergency services and public sector.

Minister of Transport, Tourism and Sport, Shane Ross TD said: “Congratulations to everyone who received an award today and on behalf of all road users, thank you for your commitment and dedication to making our roads safer. I’d like to particularly commend Richard Alcorn, a true inspiration. His bravery in not only dealing with the aftermath of such a life-changing incident but also using his experience to teach others, is why he is so deserving of the RSA Leading Lights in Road Safety Supreme Award.”

Ms Liz O’Donnell, Chairperson of the RSA presented the awards, saying: “Road safety is about making the roads we share with our family, neighbours, friends and colleagues a safer place.  It’s about keeping our local communities safe. And that’s why we are recognising the great work being celebrated here today. Work that is helping to make communities right across the country safer for all. Work that is making a difference and saving lives.”

Ms Moyagh Murdock, Chief Executive of the Road Safety Authority said: “We received over 160 nominations across the Leading Lights awards categories this year. The high quality of projects being entered meant that is was the toughest year yet to pick winners. I’d like to commend those who sent in nominations, who recognised Leading Lights in their school, office or community, who are making a difference, and put them forward for awards. It is thanks to them that we hear about the great work being done around the country to promote road safety.”