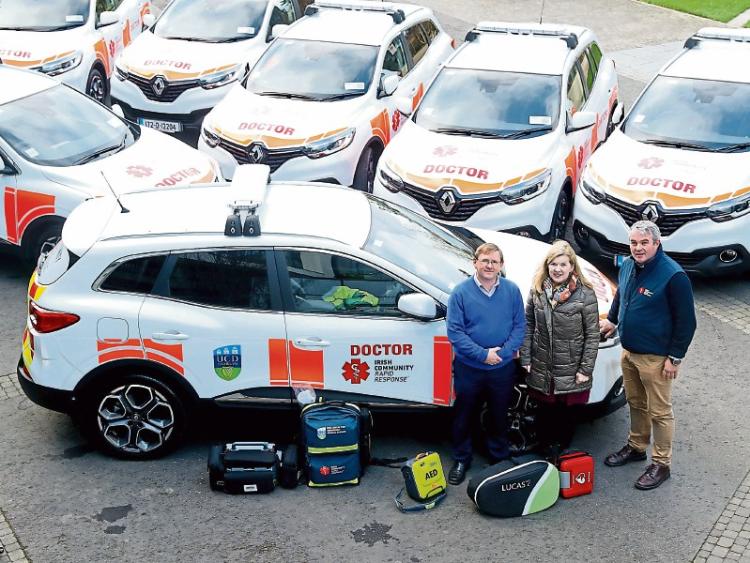 Renault Ireland has donated a Renault Kadjar crossover to the Irish Community Rapid Response (ICRR) operating in Laois/Offaly at a handover at UCD School of Medicine.

Irish Community Rapid Response is a registered charity which was founded by social entrepreneur John Kearney in 2008 to deliver professional pre-hospital emergency care directly to the site of emergencies throughout Ireland.

As part of its CSR programme, Renault Ireland is a committed supporter of ICRR and its mission, and this donation will greatly impact ICRR’s volunteer doctors on the road in providing professional pre-hospital emergency care to those in life-threatening emergencies.

Renault Ireland has donated a total of seven vehicles to ICRR, valued at €250,000, which will double the total number of Rapid Response Vehicles (RRVs) operating throughout Ireland.

Six of the new vehicles are equipped with 4x4 capabilities and all are complete with built-in satellite navigation systems to meet the needs of ICRR service providers.

The ICRR RRVs are declared National Ambulance Service (NAS) assets, and are tasked to life-threatening emergencies via the 999/112 system. ICRR also supports almost 200 other doctors responding to emergencies in their communities at local level. Overall, ICRR volunteer doctors responded to almost 1,000 calls in 2017.

Patrick Magee, Country Operations Manager Renault Ireland, said: “We are delighted to be in a position to assist this fantastic service which has saved so many lives around the country since 2008.

“It’s an amazing operation and we know that by providing our seven Renault Kadjars, ICRR’s reach will be expanded to so many more parts of the country.”

John Kearney, CEO ICRR, said: “This is a big milestone in our journey at ICRR. I want to acknowledge Patrick Magee and his extended team at Renault Ireland for their help in assisting the expansion of this successful life-saving service.”