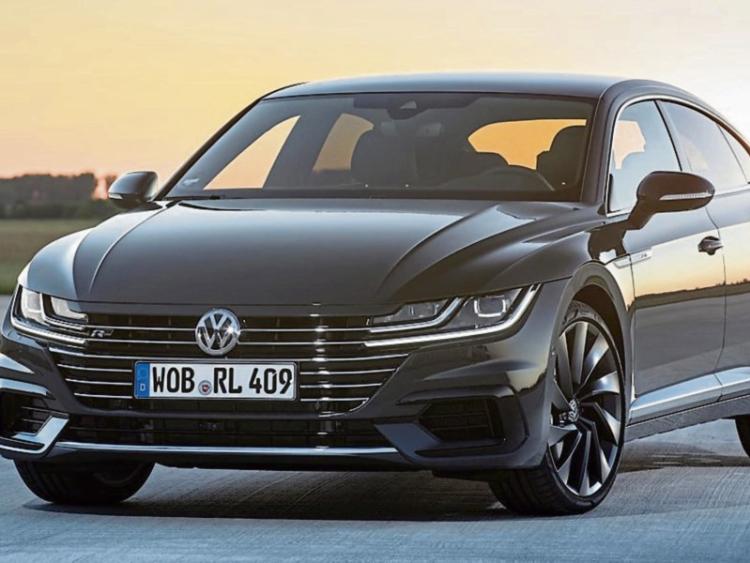 The new VW Airteon is a large fastback/hatchback that is VW’s attempt to gain a foothold in the premium segment currently dominated by the likes of Audi, BMW and Mercedes.

The new Arteon is a more direct rival to the likes of the Audi S5 Sportback or BMW 4 Series Gran Coupe for example.

Entry to the Arteon line-up starts at a not inconsiderable €43,650. The car on test this week is the R-Line powered by VW’s 2.0 TDI 150 bhp diesel and mated to a DSG 7-speed gearbox.

So does it have any street cred?

The new Arteon is indeed a real departure for VW in that the styling is much less conservative than we have come to expect from Wolfsburg. With echoes of the Passat CC in its profile the new Arteon is a dramatic looking car.

Frameless doors, a sleek profile, wide rear haunches and a distinctive and aggressive looking front end give the new Arteon real presence on the road. So top marks for style and panache and real street cred!

Bearing in mind that the Arteon is aimed squarely at Audi and BMW I was expecting something a bit more premium to the interior.

Not a bad thing as that means everything is where it should be and build quality is to the fore but compared to an Audi or BMW it does not have that same premium feel and at this price it should!

Standard equipment across the range beats its rivals hands down and its here the Arteon gains back some lost ground.

Too numerous to list here but suffice to say it boasts the very latest in automotive safety and comfort technology. The cabin is huge seating four in absolute comfort and five quite easily too.

The 563 litre boot accessed via the electric rear tailgate is cavernous.

My test car was powered by the 2.0 TDi diesel producing a modest 150 bhp and linked to a 7-speed DSG auto gearbox.

Unfortunately its a rather gruff sounding unit and lacks the refinement you would expect at this price point.

However performance is good if not electrifying and it returned reasonable fuel consumption of 6.2 litres per 100km over some 700km of mixed driving giving a real range of about 1,000km between re fuels. Road tax is €390.00.

A day trip to Belfast and back from Kildare resulting in some 430km behind the wheel with four adults on board really highlighted the true long distance cruise abilities of the Arteon.

It proved very comfortable, refined and well equipped, with nice features such as heated rear seats, plenty of USB ports from and rear, a lovely sound system and supportive seating.

The weather was dismal yet, the lights remained clean, (headlamp washers doing their job) the blind spot indicator highlighted hidden traffic and the driver fatigue system kept a watchful eye on progress.

So what is the final Verdict?

The new VW Arteon is a very accomplished car. It looks beautiful, boasts a vast array of standard equipment and is built to VW’s usual high standards. But!

I think at this level the interior needs to feel more premium and different to others in the VW stable to justify that price point.