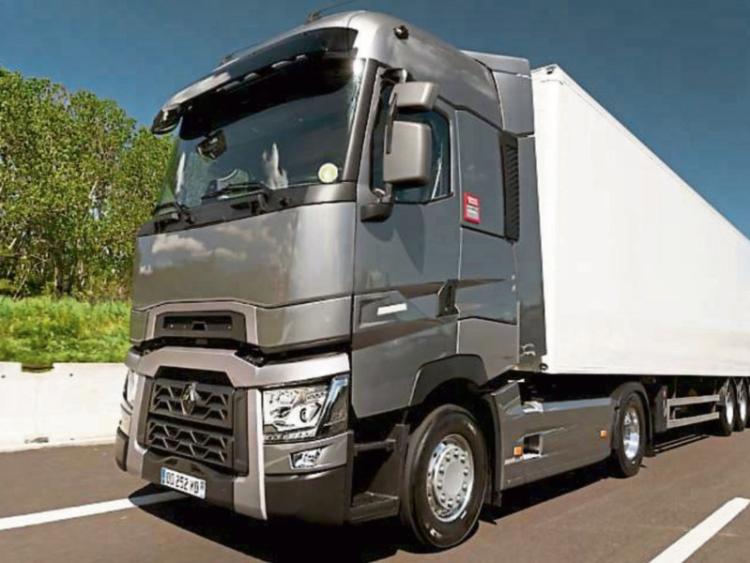 In the Fleet Transport Irish Truck of the Year Awards 2019, sponsored by Corrib Oil, honours went to the Renault Range T High which claimed the (Flagship Tractor-unit Award) as well as scooping the overall title category.

The Volvo FH won the Heavy Distribution honour, while the Mercedes-Benz Atego was successful in the Medium Duty class.

Yet another success for Renault Trucks’ Range T but this Fleet Transport Irish Truck of the Year Award 2019 is the first accolade for the recently launched High flat-floor cab version.

The announcement and presentation of the trophy was made at the 12th annual Fleet Transport Awards Gala Banquet at the Citywest Hotel, Dublin on Thursday 11th October and was received by Carlos Rodrigues, newly appointed MD at Renault Trucks UK & Ireland and Harry Nash MD of Setanta Vehicle Sales.

The expert adjudication panel acknowledged the additional interior space thanks to the flat-floor on the T High cab that will be appreciated by the long distant driver.

“It’s the 21st Century Magnum,” stated one jury member “with all the bells and whistles.”

“While it may have taken a few years to come in right hand drive form, the arrival is being welcomed by international hauliers in the UK & Ireland, as they need the additional space and comfort for those long trips away,” said another jury member.

Sister brand within the Volvo Group, Volvo Trucks won the Irish Heavy Distribution Truck of the Year 2019 with its FH.420 6x2 rigid while the Mercedes-Benz Atego 1224 collected the Medium Distribution category.

Megallift and MAN secured the honours in the corresponding but separate Irish Trailer and Truck Innovation Awards.

The Monaghan based Side Loading Trailer (SLT) system has many functions within the road and rail transport as well as the agricultural and construction sectors and merited the Trailer Innovation Award 2019.

MAN Trucks’ successful autonomous motorway safety vehicle project, which is up and running after successful test trials in Germany and Austria means that Level 4 autonomous (driverless) heavy duty vehicle movements are now with us, something which can help to relieve the driver shortage situation and increase road safety.

A selection of vans and lift trucks were selected for the Irish Green Commercial of the Year Awards 2019, sponsored by Enprova.

The FUSO Canter Eco-Hybrid was honoured for its popular diesel-electric drivetrain while Mitsubishi was awarded the Commercial SUV prize for its new Outlander PHEV (Plug-in Hybrid).

“Once again we had a great line-up of contenders for our Commercial Vehicle Awards programme, which is now in its fifteenth year.

“Thanks to all of the brands for providing the vehicles for appraisal and to the judging panel for their time and expertise in assessing the vehicles.

“Thanks also to Corrib Oil for coming on board as sponsor,” said Jarlath Sweeney, Group Editor, Fleet Transport which organises the awards.