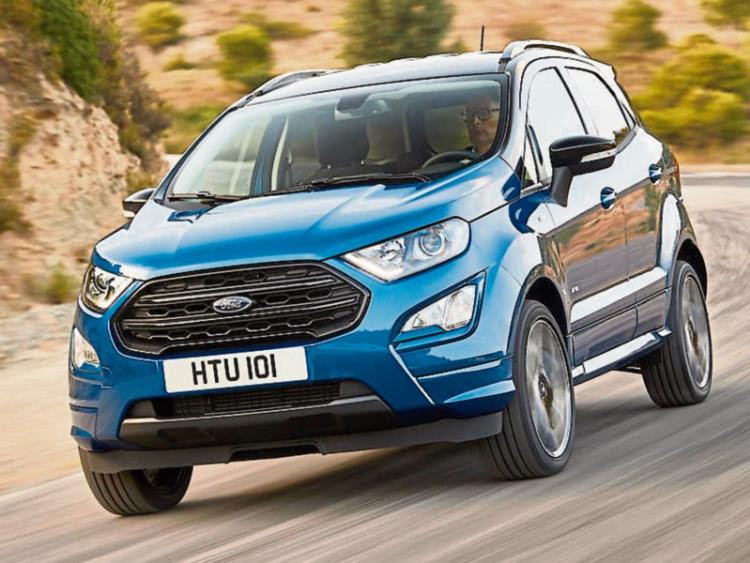 Ford claim that their new ECOSPORT is an entirely new type of SUV.

Well you can judge for yourself but for me I am not quite sure what it achieves.

Yes it has some excellent new technologies such as Ford’s communication system Ford SYNC, but so do other models in their range.

The ECOSPORT is about the size of the Fiesta inside but stands tall with the spare wheel mounted on the rear door as in large 4x4 type vehicles.

There are two engines a 3 cylinder 1.0 litre petrol Ecoboost, or as tested here the 1.5 DV 5 diesel Ecoboost.

I have got to give it top marks for style. The new ECOSPORT is a smart looking mini SUV. Despite its compact dimensions it has a presence. With attractive alloy wheels and front and rear skid plates it looks the part.

The cabin of the new ECOSPORT is good and actually quite contemporary with sweeping lines and a definitely sporty overtone.

The high driving position is great and the level of standard equipment as we have come to expect from Ford is very good. I am not going to list everything here but in addition to all the now expected safety features such as ABS, ISOFIX, multiple airbags and so on, the new ECOSPORT boasts some very interesting technologies which merit mention.

Ford SYNC, allows smart phones to be connected via Bluetooth and then stream music from your phone to the cars speakers. In addition SYNC automatically connects the cars occupants to the emergency services in the event of an accident. Ford SYNC lets you control your music and make and receive calls on your mobile, using simple, direct voice commands. For example, if ‘home’ is listed as a contact on your mobile, you just need to say: “Call home” and the system will automatically dial that number. You can use voice commands to play songs from a USB or MP3/iPod too, or stream music from a Bluetooth -compatible phone. The system even reads your incoming texts aloud.

The cabin is generally well laid out and will accomadate 4 adults quite nicely. I did feel however some of the plastics used inside looked a bit cheap with that hard finish. It could be better.

My test car was powered by the 1.5 DV 5 Ecoboost engine which was mated to the standard 5-speed gearbox.

With a reasonable power output of 91PS I found performance to be quite good.

It is a refined diesel unit too and over my weeks test proved frugal enough to burn just 4.9 litres of diesel per 100km. It falls into band A$ for road tax.

The new ECOSPORT offers a perfect blend of agile handling with excellent ride quality. Furthermore it proves nicely quiet and refined at all speeds.

In fact this is a very rewarding little car to drive. Many will like the higher driving position offered by the SUV like stance of the ECOSPORT, and the front and rear skidplates do offer some limited protection should you venture onto the hilly stuff. Though I feel buyers of the ECOSPORT will remain on terra firma for the most part!

Accomodation is good too with good room for four adults and a decent sized boot accessed via the large swing opening tailgate.

The new Ford ECOSPORT is a stylish, and capable compact SUV. Its nimble around town and I suppose offers a bit more ground clearance and therefore versatility for those who want that. Beyond that though I am really not sure why I would want one.

The new Ford ECOSPORT costs from €23,995 and comes standard with a full 5 year Ford warranty.