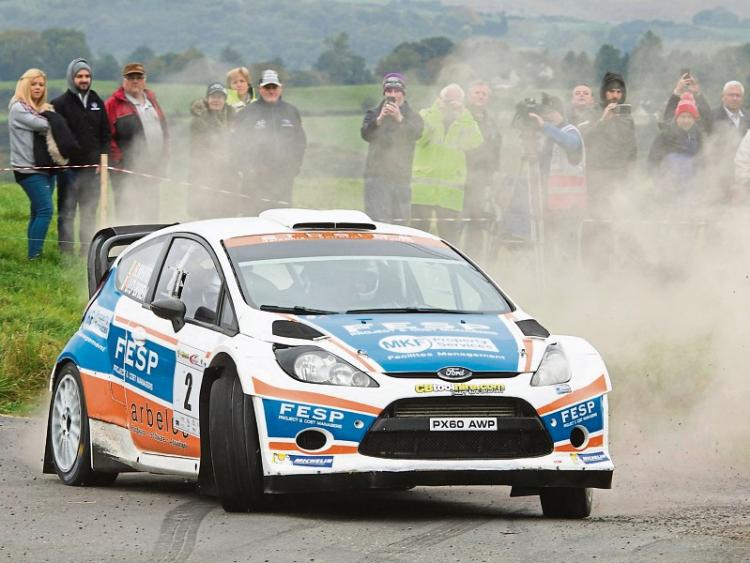 A new season of the Triton Showers National Rally Championship begins on Sunday with the Abbeyleix Manor Hotel Rally, that is organised by the Birr and District Motor Club with Bill Ryan as clerk of the course.

The event, round one of the eight round Triton series makes a return to Abbeyleix after a brief tenure in Nenagh.

Reigning champion Donegal’s Declan Boyle (Ford Fiesta WRC) and three past champions are amongst the entry of some 100 crews. Boyle won last year’s series on a final round decider in his native county where he clinched the series for a record equalling third time, he previously won national titles in 2014 and 2015.

Last year’s rally winner Clonmel’s Roy White (Ford Fiesta WRC) is set for another national campaign and while he won the title in 2016, he did so with a very consistent performance on each of the events.

Last year’s rally wasn’t a round of the Triton series when White took a 21.1 second win over former champion Donegal’s Donagh Kelly (Ford Focus WRC) with Boyle (Fiesta WRC) a further 19.7 seconds behind in third. At the time, that victory was his first major win while last October he netted his first International Rally win when he triumphed in the Cork “20” International Rally.

Could Sunday’s rally provide him with his first outright win in a counting round of the Triton series? The opposition is strong while the loop of three stages (in the Borris-in Ossory/Kinnity/Rathdowney area) that are repeated three times will also provide a formidable challenge.

No doubt Boyle will set a quick pace as will Monaghan’s Josh Moffett (Fiesta WRC), who just fell short at the final hurdle last year, he has won all the other major honours in Irish rallying and has set his sights on finally achieving victory in the Triton Championship.

The top ten will also feature Niall Maguire, the Monaghan stalwart is an avid supporter of Irish National rallying and while his pace has dropped from his halcyon days in the late 1990’s he is still a force to be reckoned with and he thoroughly enjoys the experience.

Meanwhile, Warrrenpoint’s Peadar Hurson (Ford Fiesta WRC), who won the series back in 1992, is still a potent force, only a lack of consistency has seen him drop out of the national challenge in recent years.

Welsh ace Steve Wood (Subaru WRC) makes a return to the Triton series and he will be hoping to match the pace of the top drivers.

Title sponsor Maynooth’s Kevin Barrett (Subaru WRC) only made a few outings in last year’s campaign, he returns for a full season while he will also be keeping a watchful eye on his son Paul, who makes his National debut in a sparkling new Ford Fiesta R5 in the Vado livery. Last year’s one time series leader Donegal’s Joe McGonigle (Mini WRC) is another of the top seeds, he had a very consistent run to finish third overall last season.

Prior to the event, mechanical scrutiny take place this Saturday evening from 2pm until 7.30pm at Oliver Stanley Motors, Cork Road, Durrow. On Sunday, the first car away from rally headquarters at the Abbeyleix Manor Hotel is at 9.05am with the finish ramp celebrations scheduled for 5.28pm.

Clerk of the Course: Bill Ryan.