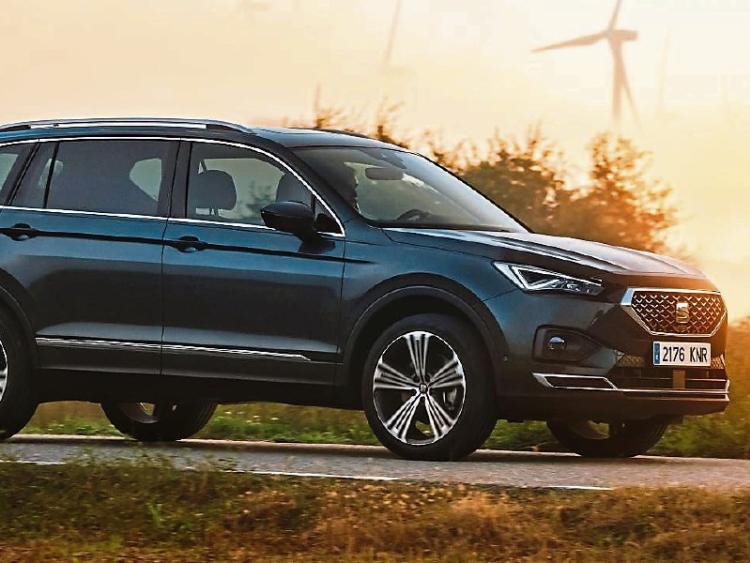 The rise of the SUV and Crossover continues.

Its quite ironic really in an age where there is the never ending drive to reduce emissions and countless campaigns by governments to penalise the motorist with higher taxes and congestion charging, we are actually, building and buying bigger, heavier and therefore less fuel efficient ( than a smaller vehicle) cars.

So not to be outdone Seat have launched their large 7-seat SUV the new Tarraco. Seat are owned by the VAG Group and so its no surprise that the Tarraco shares pretty much everything with the VW Tiguan Allspace and Skoda Kodiaq.

Has it any street cred?

The Tarraco is an imposing looking machine with clean uncluttered lines. I am testing the top of the range Xcellence model so it gets some nice extra detail cosmetic touches. I like the LED full width light bar, front LED lights, roof rails and two tone alloys.

The cabin of the new Tarraco is one of the most upmarket of the Seat range. Materials are of a high quality and the fit and feel of everything is top notch.

The level of standard equipment on the Xcellence model tested here is superb. Highlights include 19” alloys, Leather and Alcantara interior, Digital cockpit, Virtual pedal for handsfree opening of the tailgate, voice control, 8” Colour touch screen, Connectivity box with wireless charging, electric seats with memory function, rear camera, auto dimming mirrors. I could go on its truly comprehensive and a class leader in this respect.

The Tarraco is available with either two or four wheel drive and petrol or diesel power plants. Either a 1.5 TSI 150 bhp petrol and a 2.0 litre 190 bhp or as tested here a 2.0 TDI diesel with a choice of 150bhp or 190 bhp power outputs. Standard is a 6-speed manual or a 7-speed DSG auto as on this test car. One gripe I had was that the DSG gearbox even in sport mode never seemed to downshift early enough for a corner leaving me in a higher gear than I needed when exciting the corner.

Performance is good and over my 600km read test it burned 7.7 litres of diesel per 100km.

Seat markets itself as the more sporting division of the VAG group. The new Tarraco sits 20mm lower than its sibling Skoda Kodiaq but at the end of the day its still a 4.7 meter long tall vehicle so while it drives well its not going to set your heart alight.

Handling is surefooted and in the all wheel drive version tested traction is excellent even on wet roads.

Refinement is another virtue as it proves pretty quiet save for a bit of a diesel growl at lower speeds and a small amount of wind noise from those big door mirrors.

I really like the new Seat Tarraco. Having tested its VW group rivals I would plumb for it for its sightly more dynamic abilities and attractive cosmetic details which define it from its stablemates in the VAG Group.

So unless you need 4 wheel drive go for the cheaper 2 wheel drive because at close to €60k your in BMW X3 territory.