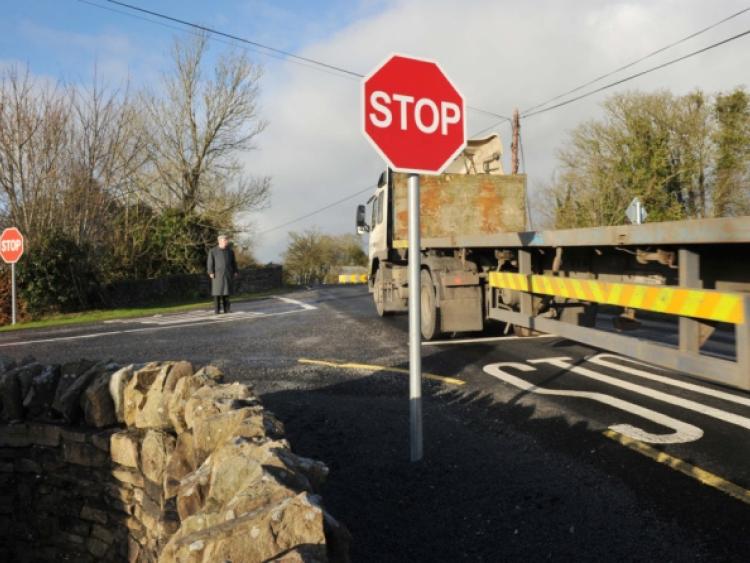 Cllr Paddy Bracken standing at the Laois junction with four stop signs, back in 2013.

Traffic lights are coming to a busy rural junction in Laois often used by drivers between Portlaoise and Tullamore.

The controlled traffic lights are coming to a crossroads near Mountmellick, to solve dangerous driving at what is an accident blackspot.

Hickey’s bridge in Derrycloney has been the scene of multiple traffic collisions over the years.

The staggered crossroads is over a humpbacked bridge with poor sightline for drivers. It is often used by traffic between Portlaoise and Tullamore avoiding Mountmellick town centre.

It was made a ‘four stop junction’ by Laois County Council in 2013 to make it safer, with a stop sign on every road.

Drivers from all four directions were meant to stop and only proceed if no traffic is coming.

However an estimated 50% of drivers continued to drive straight through the junction without slowing, believing they still have right of way.

Mountmellick Gardaí confirmed in 2014 that the four stop signs were causing confusion. Rumble strips and a light at the junction were suggested at that time by councillors.

The four new traffic lights are controlled. They will turn green if a vehicle approaches the sensor and the road ahead is clear, similar to lights nearer Mountmellick at Manor road.

Cllr Paddy Bracken has been requesting safety measures on the bridge for many years.

“I have been fighting for them for years. The only road anyone was stopping was the one coming from Mountmellick. People didn’t stop on the other roads, it was deadly dangerous, there have been several accidents,” he said.

The traffic lights are being installed following a safety audit of the site.

“The stop signs were not effective, this is the real solution,” Cllr Bracken said.

“The work is done now underground and the poles are up. I hope that fairly soon the ESB will have them connected up,” he said.

Laois county Council did not confirm the cost of the new traffic lights.