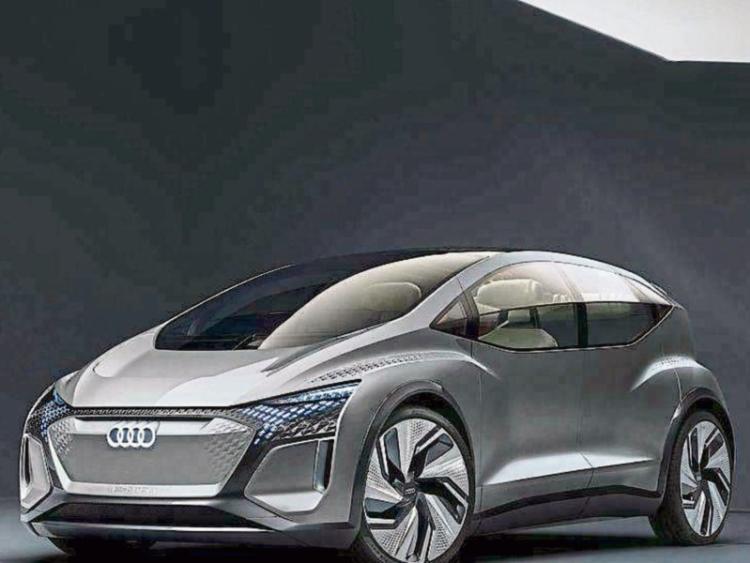 Audi is augmenting its all-electric product range with the Audi Q2L e-tron, which was specially developed for the Chinese market. Audi is also presenting the concept car: The Audi AI:ME that illustrates its vision for automated driving in an urban space.

The Audi AI:ME is a visionary mobility concept for the megacities of the future. The showcar offers compact dimensions, a spacious, futuristic interior, and the ability to drive autonomously at level 4. The Audi AI:ME offers a broad range of high-tech features for communication, entertainment, or simply relaxation.

The body line of the Audi AI:ME demonstrates how emotion and spatial economy can form a perfect synthesis in an electrically driven compact car.

There is a reason that the name AI:ME emphasizes the relation to the Audi AIcon, the study of automated long-distance operation introduced in 2017. The affinity of the body line and the concept of these two cars will become evident in Shanghai, as the AIcon will flank the world premiere on the stage of the Audi booth at Auto Shanghai 2019.

The Audi Press Conference is available to watch on Tuesday, April 16, starting at 11 am local time (4 am Irish time) live via satellite, online and smart TV. After the event has concluded, a recording and additional TV footage will be available at www.audimedia.tv.

With an exterior length of 4.30 metres and a width of 1,90 metres , the Audi AI:ME takes up as much traffic space as a present-day compact car. However, the wheelbase of 2.77 metres and the height of 1.52 metres indicate interior dimensions that are more likely to be found in the next higher class at least.

This is made possible by the architecture of the electric drive. It allows for short overhangs and a large-volume interior without a propeller shaft tunnel. The drive unit is positioned on the rear axle and mobilizes 125 kW (170 metric hp).

Audi AI:ME and Audi AIcon: two concept cars whose very names refer to the new, two-letter abbreviation under which Audi is bundling an entire cluster of innovative mobility technologies.

Audi AI is the cipher for a variety of electronic systems that relieve strain on drivers and simultaneously offer them new possibilities to use the time spent in the car.

The name of the Audi AI:ME thus already makes the connection between AI and the users themselves. Audi AI systems are capable of learning and thinking, while also being proactive and personal.

Thanks to Audi AI, models will be both intelligent and empathetic in the future. They will be able to continually interact with their surroundings and passengers, and thus adapt themselves in a better way than ever before to the requirements of those on board.

Automated driving at level 4: Relax while gliding through the city

What is long established in rail transportation and even aviation is at the threshold of a breakthrough in automotive transportation - automated driving.

The Audi AI:ME is designed for use in the city and for driving at what is known as level 4. This is the second-highest level on a standardized international scale for increasing automation.

Although systems with level 4 do not require any assistance on the part of the driver, their function is limited to a specific area—such as highways or a specially equipped area in inner cities.

In these places, the driver can completely transfer the task of driving to the system. The driver needs to resume the task only when the car leaves the area defined for fully automated driving.

By contrast to the Audi AIcon, a vehicle with level-5 function that is always fully autonomous, the Audi AI:ME is therefore equipped with the traditional steering wheel and pedalry control elements in addition.

A face in the crowd: the exterior

The Audi AI:ME is immediately recognizable even in the rearview mirror: Its face is characterized by the hexagonal Singleframe with the inverted shape and surface typical for an electric Audi.

The architecture of the body is a newcomer to the pool of Audi shapes. If you look closer, though, the relation to the Audi AIcon concept car introduced in 2017 becomes apparent.

Despite the completely different proportions, there are clear similarities in the precise graphics of the contours and the long arch of the roof line. But the main connection between the two different autonomous vehicles is the significant angle in the side windows.

The exterior differs strongly from the mainstream competition. The Audi AI:ME is a targeted alternative design.

More than just a hint of a wedge shape, the accentuated and drawn out wheel wells that are typical for the brand and the striking window graphics create a highly emotional overall shape.