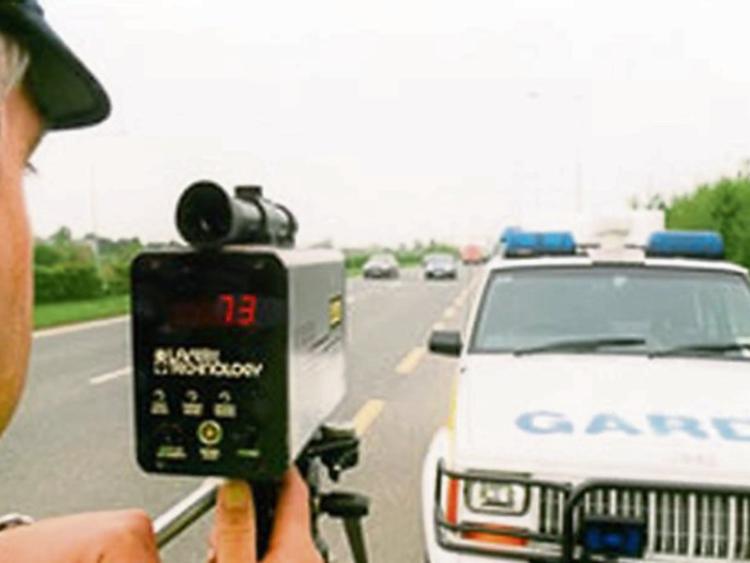 A clampdown on motorists driving over the speed limits on Irish roads is apparent in new figures published by the Gardaí as part the National Slow Down Day held last week.

Garda reported that from January 1 to March 31 there have been 36,014 speeding detections.

Some of the fastest drivers have been caught on nearby roads.

On the R445 at Ballymany, Newbridge in Co Kildare a motorists was caught driving at 132km/h in a 50 km/h zone.

Meanwhile on the M7 Dublin Cork motorway at, Ladytown, Naas someone was caught driving at 136 km/h in a 60 km/h zone. The motorist was clocked by gardaí during roadworks on the motorway. Extensive warnings were issued to drivers about the strict enforcement of speed limits during the roadworks.

The most recent National Slow Down Day carried out in October involved speed checks the speed of 164,032 vehicles with 276 detected travelling in excess of the applicable speed limit.

Last May's campaign resulted in 132,188 vehicles checked with 211 detected travelling over the limit.

Garda checks on speed are carried out primarily through the GoSafe speed vans. They provide a minimum of 7,400 enforcement hours and a maximum of 100 survey hours per month across the country.

For the 7,400 enforcement hours, the cameras operate from vans which are marked with high visibility reflective material and display a safety camera symbol.

Aprat from the GoSafe speed vans Gardaí use a range of speed detection technology.

These include handheld and tripod mounted laser guns.

There are over 1,000 sections of road identified as speed enforcement zones effective from May 27 2016. Gardaí say ongoing surveys are conducted to ensure that these sections of roads continue to represent locations where speeding is happening.

Gardaí and the Road Safey Authority say excessive and inappropriate speed is a major contributory factor in road traffic collisions.

They say this is confirmed by the recent RSA report on fatal collisions between 2008 and 2012 which found that excessive speed was a contributory factor in almost one third of all fatal collisions during that time.

The higher the speed, the greater the likelihood is of a collision happening and the more severe the outcome of that collision.

Gardaí say that, as a general rule, a 1% reduction in average speed will bring about a 4% reduction in fatal collisions, and this is why reducing motorists’ speed is essential to improving road safety.

The vast majority of drivers drive safely within the speed limits, and it is most welcome, but there still remain those that do not. We will continue to focus on non-compliant drivers who, drive in excess of the speed limit and pose a risk to themselves and other road users. Each time a vehicle speeds excessively or inappropriately, it could result in a serious or fatal collision,” he said.

“It’s worth considering that if you hit a pedestrian at 60km/h only one in ten will survive,” she said.

The penalty for speeding is three penalty points and an €80 fine.