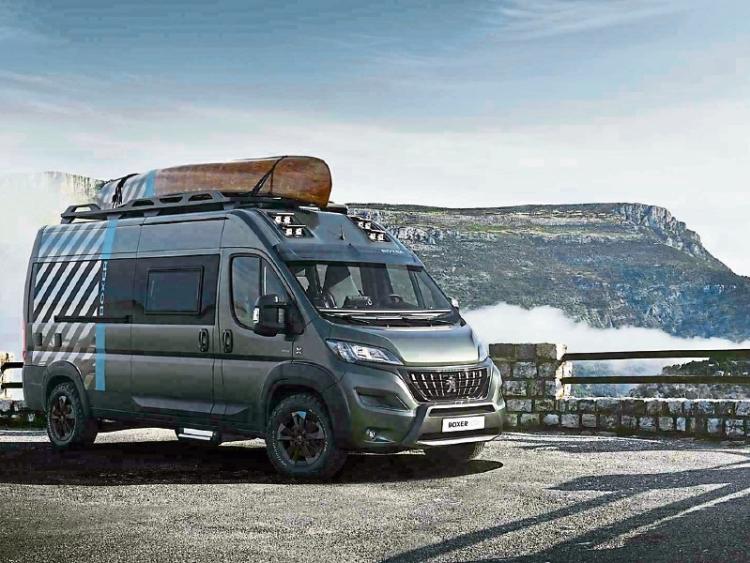 PEUGEOT has released photos of its new Boxer 4X4 concept, ahead of its world unveiling at the international Recreational Vehicle Show, being held at Le Bourget from September 28 to October 6.

It will be on show sporting a Canadian walnut canoe on its roof rack and the latest-generation PEUGEOT electrically assisted mountain bike on a rear hitch support.

With over 720,000 units of Boxer vans sold since its launch, PEUGEOT will use the Recreational Vehicle Show to showcase its latest vision of the perfect partner for adventurers.

Built on a Boxer L3, the 6m length offers a 10m2 living space for up to 3 people, to include a kitchen and dining area, a sleeping area, a bathroom and the driver’s station.

Robust and practical, an eye-catching livery in a wanderlust green with mint touches and dark chrome features, is matched to a soothing interior cabin, clad in grey Alcantara and finished with mint touches.

Special attention has gone into choosing the materials used inside: the table, worktop and sink are made from aragonite, combining hard natural stone with the beauty of ceramic.

The entire floor, designed by the French start-up company SASMINIMUM, is made of 100% recycled and 100% recyclable materials: plastics used are made up of 85% car tank, 10% milk bottle and 5% various white plastics such as soap bottles.

Since 2017, SASMINIMUM has worked to recover and recycle plastic, mainly collected directly from nature and near oceans, that is not normally integrated into a recycling process.

It is guaranteed by the Waste&Hope label, which means it is more expensive to purchase, but it finances the social and ecological actions of this organisation.

Fitted with a BlueHDi 165bhp engine, together with Particle Air Filter (FAP) and 6-speed manual gearbox, the steepest slopes are easily overcome in the Boxer concept.

Indeed, PEUGEOT is also introducing a new, factory-fitted Alpine satellite navigation system developed specifically for motorhomes to calculate routes that avoid low bridges or roads that are too small or narrow.

A large colour screen is fully integrated into the dashboard and accessed using remote controls on the steering wheel.

Maps are updated for three years free of charge. Compatible with Android Auto and Apple CarPlay, it connects two phones via Bluetooth.

The 4x4 DANGEL transmission is activated via a switch located within easy reach.

There are three modes of driving: 2WD mode for daily driving; 4WD mode ensures power is sent to the rear wheels should you lose traction; lock mode is useful in extreme conditions.