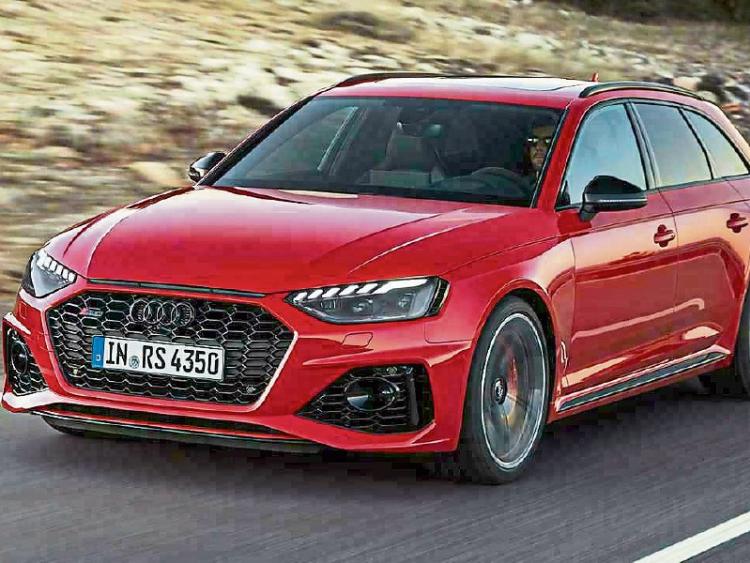 Audi Sport GmbH has fine-tuned many details of the RS 4 Avant which was newly introduced in September 2017.

The newly designed front section and the sporty interior with the new MMI touch operating system underlines the athletic aspirations of the successful model, which has a legendary line of ancestors.

The high-torque twin-turbo V6 with a power output of 450 hp applies an impressive 600 Nm of torque to the crankshaft in a broad engine speed range from 1,900 to 5,000 rpm.

The RS 4 Avant will make its debut at the DTM finale at the Hockenheimring on 4 to 6 October 2019. The new RS 4 Avant will be available in Audi dealerships in Ireland from December 2019.

The front section of the new RS 4 Avant has been completely redesigned. The RS 4 Avant differs considerably from the A4 Avant.

The Singleframe is wider and flatter compared to the base model. Just like its big RS brothers, the RS 6 Avant2 and the RS 7 Sportback3 the RS 4 Avant also features the three-dimensional honeycomb structure in gloss black that is typical for the RS model series. To give it a clean look, the Singleframe is designed without a frame.

The new eggcrate grille with the RS 4 emblem is inserted directly into the bumper with the large lateral air inlets and vertical flaps. The RS 4 Avant also comes with 20-inch Audi Sport wheels as standard.

The shape of the LED headlights of the RS 4 Avant has also been redesigned. The optional matrix LED headlights with darkened bezels complete the revised appearance of the high-performance Avant and differentiate it within the A4 family.

The wheel arches with the quattro blisters located above are 30 millimetres wider at the front and back compared to the Audi A4 Avant.

Gloss black design elements positioned right next to the headlights underline the width of the new RS 4 Avant.

The TFSI engine weighs just 182 kgs, which is 31 kgs less than the V8 engine in the predecessor model from 2012.

The twin-turbo V6 applies an impressive 600 Nm of torque to the crankshaft in a broad engine speed range from 1,900 to 5,000 rpm. The RS dynamic package increases the electronically governed top speed from 250 to 280 km/h.

The power of the 2.9 TFSI flows to the quattro permanent all-wheel drive system via the sporty eight-speed tiptronic.

In regular driving, the system delivers more power to the rear axle. Its purely mechanical centre differential directs 60 percent of the torque to the rear axle and 40 percent to the front.

If an undesired slip occurs at one axle, most of the power is automatically and rapidly redirected to the other axle—up to 70 percent to the front or up to 85 percent to the rear axle.

The axle concept of the suspension with five-link suspensions at the front and rear enables the optimal absorption of longitudinal and lateral forces.

The RS sport suspension plus with Dynamic Ride Control (DRC) enables even more agile handling and is available upon request.

This integrated roll and pitch stabiliser consists of a special damper system that counteracts the movements of the vehicle body with no delay, without the use of electronics.

When the vehicle is turning into and traveling around a bend, the damper response is altered so that the vehicle’s movements around the longitudinal axis (roll) and around the transverse axis (pitch) are significantly reduced.

As a result, this highly responsive damper system ensures that the RS models are particularly precise when negotiating bends.

The 10.1 inch MMI touch display is the control centre of the new operating system. It is located in the centre of the instrument panel and tilted slightly toward the driver.

The touch-sensitive screen displays a high-resolution graphic animation of an RS 4 Avant to welcome the driver.

The MMI touch display provides acoustic feedback and takes over the functions of the previous rotary pushbutton on the centre console.

The driver can use the RS monitor to call up an overview of drive system component temperatures, maximum g-forces and information regarding tire pressures and temperatures.

The shift light display prompts the driver to upshift when the rev limit is reached.

The driver can actuate the two RS1 and RS2 modes in Audi drive select directly via a new “RS MODE” button on the flat-bottomed RS multifunction sport leather steering wheel.

This automatically opens the RS-specific displays in the Audi virtual cockpit. The new aluminium shift paddles are considerably larger than before.

Aside from the steering wheel and the illuminated door sill trims, the RS sport seats with optional honeycomb pattern and the shift gate also bear the RS emblem.

The RS 4 Avantprovides the same level of everyday usability as the A4 Avant base model.

The luggage compartment has a capacity of 495 litres which increases to 1,495 litres with the rear seats folded down and cargo loaded to the roof.

Customers of the RS 4 Avant can select from eight paint colours, including the new plain colour Turbo blue and the new metallic colour Tango red.

This colour already characterised the RS 2 Avant as the legendary forefather of all RS models back in 1994.