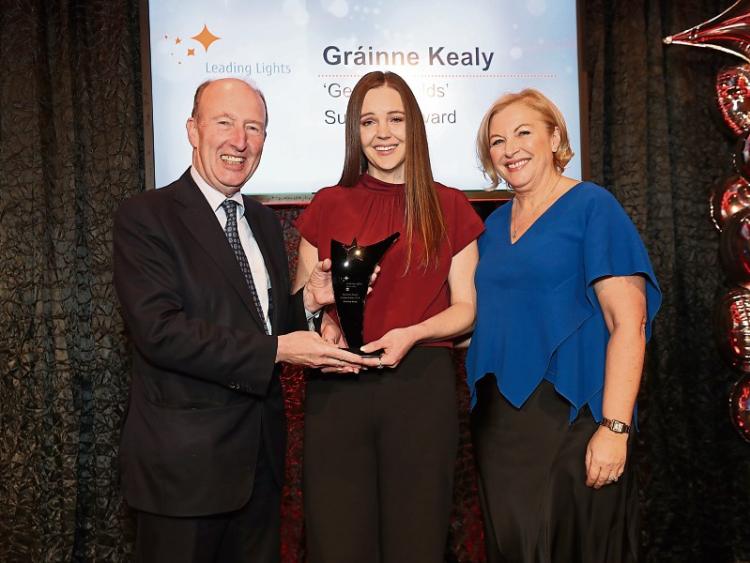 Tipperary woman, Gráinne Kealy, who suffered a brain injury and serious facial injuries in a road traffic collision, and now uses her experience to educate others, has been awarded the Road Safety Authority (RSA) ‘Gertie Shields Supreme Award’ in road safety for 2019.

The award was presented to Gráinne by Minister for Transport Tourism and Sport, Shane Ross TD, at the RSA’s 12th annual ‘Leading Lights in Road Safety’ Awards in Croke Park.

Gráinne’s life changed forever in 2006 when the jeep in which she was a front seat passenger, skidded on black ice and crashed into a wall.

At the time of the crash, Gráinne was seated with her feet up on the dashboard in front of her, the airbags deployed and Gráinne’s knees crashed into her face.

As a result, Gráinne suffered brain and serious facial injuries. So severe were her injuries that surgeons had to remove her forehead and she has undergone countless operations and procedures over the years since.

This year, Gráinne assisted the Road Safety Team in the Thurles Garda Roads Policing Unit to educate young people on the reality of trauma on Irish roads.

Delivered to over 500 people, Gráinne recounts her experience and recovery process to help influence and remind students of the importance of behaving and sitting correctly when travelling as a passenger in a car.

A total of 17 awards were presented by the RSA to individuals and organisations in recognition of their commitment and dedication to road safety at the ceremony.

Master of Ceremonies at the event was RTÉ’s ‘How’s your Driving?’, ‘Now You See Me?’ and Ireland AM presenter Simon Delaney.

“Huge congratulations to everyone who received an award today, I’d also like to thank you for your passion and commitment to road safety.

“I recently attended the launch of the Christmas and New Year’s road safety appeal at the National Rehabilitation Hospital, where we heard from survivors of road traffic collisions.

“This served as an additional reminder of why it is so important that people embrace road safety education efforts in their communities.

“I would particularly like to commend Gráinne Kealy, not only in dealing with the aftermath and recovery from such a life-changing incident but in using her experience to raise awareness of road safety among young people.

“She is exceptionally brave and as such is so deserving of this award.”

Liz O’Donnell, Chairperson of the RSA presented the awards.