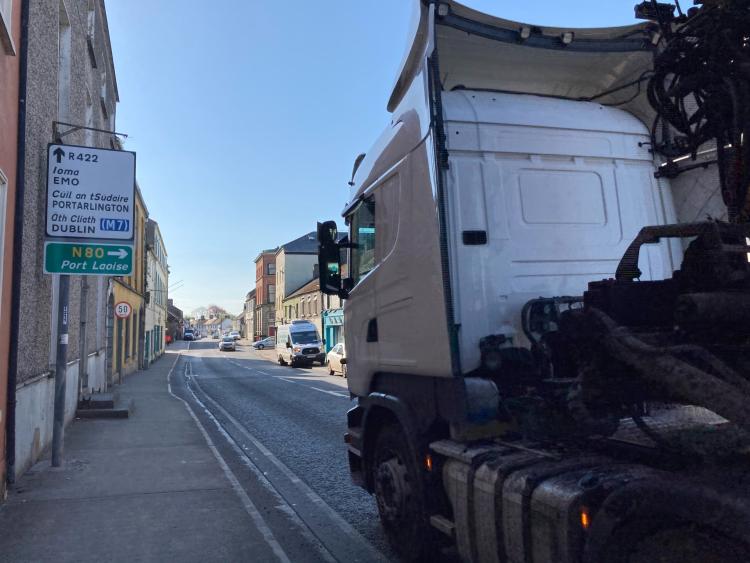 Laois is effectively being held back from growth because relief roads for its three biggest towns are left out as priorities in the latest National Development Plan.

No national roads funding can be given for relief roads for Mountmellick, Portarlington and the final section needed in Portlaoise, because those projects are not listed in the plan which lasts up to 2027.

The bad news was given by Laois County Council at their April meeting, as the 2021 roadworks €27 million budget was approved.

Director of Services over Roads Simon Walton listed the efforts the council is making to push for funding for the new relief roads.

They had commissioned a feasibility study on the N80 Mountmellick relief road and gave this to the Transport Infrastructure Ireland (TII), but no funding has be given to progress the plans.

Consultants recommend both a Western and an Eastern relief road to take heavy passing traffic out of Mountmellick town centre.

The urgent need for a Mountmellick relief road was stressed by Cllr Paddy Bracken. The national road cuts right through the town centre, bringing trucks and dangerous fumes.

“I don't know what it takes. Mountmellick needs it if ever it needed it. There are up to 10,000 vehicles passing on the N80 24 hours a day. It's a huge volume. What do we need to push it forward? It's fundamental to the town, and the county. this is the route to the west,” he said.

Cllr Willie Aird in Portlaoise said his town is also in need.
“With the way Portlaoise is growing, and all this traffic is going to the west,” he said.

Mr Walton said they have made a strong case to the TII.

“Before TII give funding, the state must see fit to put it into the plan.
“Until they are listed as priorities in the National Development Plan they will not progress. We gave a submission to reconsider the National Development Plan and we made a strong case for Portlaoise and Mountmellick, and had a comment on Portarlington's relief road too. There is some clarity to come on it,” he said.

For Portarlington, the council say a relief road remains an objective. It would need planning approvals including a bridge over the protected River Barrow which will require extra environmental studies and licences.

They say that even the cost of planning Port's road will be “very considerable” with a risk it will fail to get planning consents.
The council is however going to review the existing preferred route for the road and identify any newer alternatives.

In Portlaoise, the last section of relief road is still missing, the Northern road linking Fairgreen on the N80 Mountmellick road, past Rathevan to the Dublin road. It will be missing for years to come.

“Various submissions have been made to the Department of Transport and Transport Infrastructure Ireland supporting advancemnet in delivery of the Portlaoise NRR. The scheme is not listed as a priority in the National Development Plan and until it is, TII will not assign funds to advance the necessary planning,” the scheme document reported.