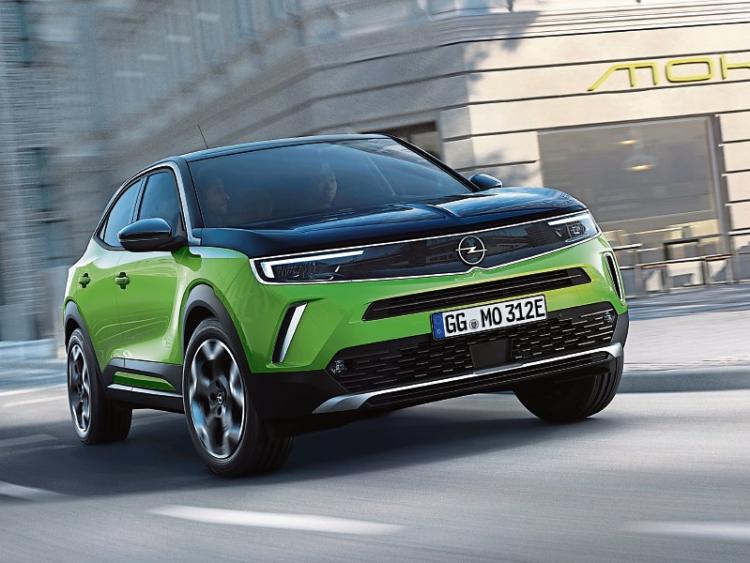 The new Mokka is available in petrol and diesel and an all electric version. Prices start at €23,500 for the entry model 1.2 SC 100bhp petrol.

The Mokka is up against a huge raft of pretty good rivals such as the new Nissan Juke, Renault Captur, and VW T-Roc to name but a few. Opel have gone to considerable lengths to make the new Mokka a more striking car to look at and a better one to drive and own.

I spent some 500km behind the wheel of the new Mokka SRi 130 version this week.

This is a very stylish newcomer to the compact SUV segment. The new Mokka really is striking in appearance with a new look “Opel Vizor” front face and in SRi trim stylish black 18”alloys and a black roof which looks great against the white of the test cars bodywork. Its a bit of a head turner actually. So top marks for exterior design!

There is a very attractive new interior with a “Pure Panel cockpit” with two widescreen displays of up to 10 and 12 inches in size and plenty of standard kit. One feature I like very much is that Opel have retained real buttons for the most used functions. I am forever saying that we don’t need all the cars functions hidden in sub menus on giant distracting touchscreens. Well done Opel for keeping a few real buttons!

There are three trim levels available SC, SRi (as tested here) and Elite. I particularly liked the Sporty SRi trim which includes heated seats, electric folding mirrors, rain sensing wipers, auto dimming rear view mirror and auto lights , alloy sports pedals, leather look trim and LED lights. A particularly nice function is the auto locking and opening. Simply carry the key fob in your pocket and the car automatically opens when you touch the drivers door handle and auto locks as you walk away. Up front there is bags of room but the rear could be described as cosy for two full sized adults.

The boot is a decent size but alas no space saver spare wheel in the huge empty (save for a tub of puncture repair glue) wheel well. Interestingly I tested Opel’s Crossland recently and they give you a space saver spare in that.

There is also an all electric version available in SRi or Elite trim. My test car was powered by the very nice and peppy 1.2 litre petrol turbo with the higher 130bhp power output. It performed really well with lively acceleration and a decent fuel economy. I averaged 6.1 litres per 100km over a mixed variety of driving. The optional 8-speed auto gearbox is very smooth and there are paddle shifts for those who want a bit more interaction with the driving. Road tax is €210.00 for a year.

The new Mokka proves pretty refined, and has plenty of get up and go in this the 130bhp SRi version. The suspension proves nicely set up for most roads though it can feel a bit too firm over less perfect surfaces. Overall though its a nice drive.

I really liked the new Mokka SRi. Its stylish, well put together and nicely kitted out. Priced from €28,795 I think represents good value for such an attractive car!