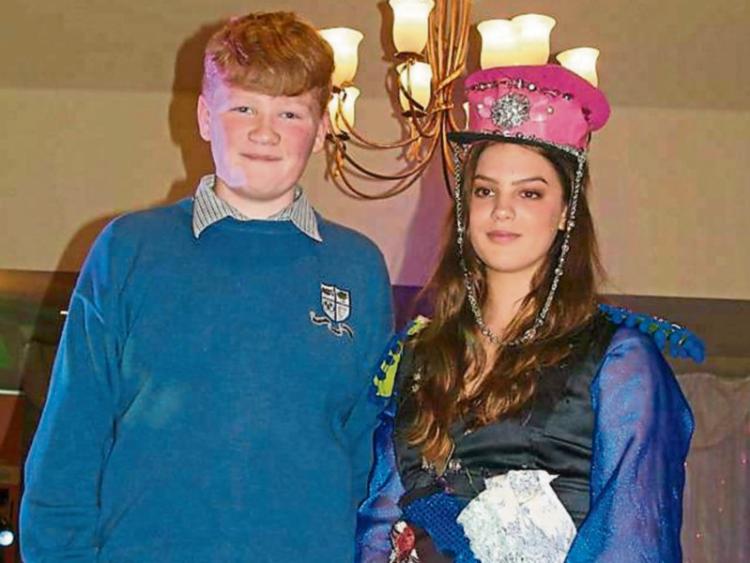 A young Mountmellick student who upstyled his great grandad's army hat was the winner of a fashion prize at the Style it Forward charity event in Laois last weekend.

Conor Gormley aged 14 is in 2nd year at Mountmellick Community School, and was thrilled to win the €300 prize, which he shares with the school and his model Leah Tarpey.

“I was so delighted to win, I was very surprised,” he said.

He spent a full week working on his entry, with a lots of early morning starts”.

“For the hat I used my great grandfather's army hat and upstyled it with pink leather and put on old jewels on the front. I used bits of vintage fabric from my stash for the front of the dress, and an old net curtain for the train,” Conor said.

The teenager hopes to become a fashion designer.

“I really want a career in design,” said Conor, a son of Anne Kearns Gormley and James Gormley.

“Great achievemnt for Conor who won the Upstyle My Dress Award. Also well done to his beautiful model Leah Tarpey. Both students are in 2nd year and have done our school proud,” she said on the Home Economics facebook page.

The Style it Forward weekend was organised by Mountmellick woman Janet Stewart.

She was also impressed with Conory's work.

“His entry was amazing we were blown away by it. We are all so proud of this young man and all agree we will see his name in some other fashion awards in the future,” said Janet.

The weekend of fashion at The Heritage Hotel Killenard was held in aid of the Ben & Jake Connolly Trust, Bone Cancer for Leukaemia Trust, and the Irish Cancer Society,