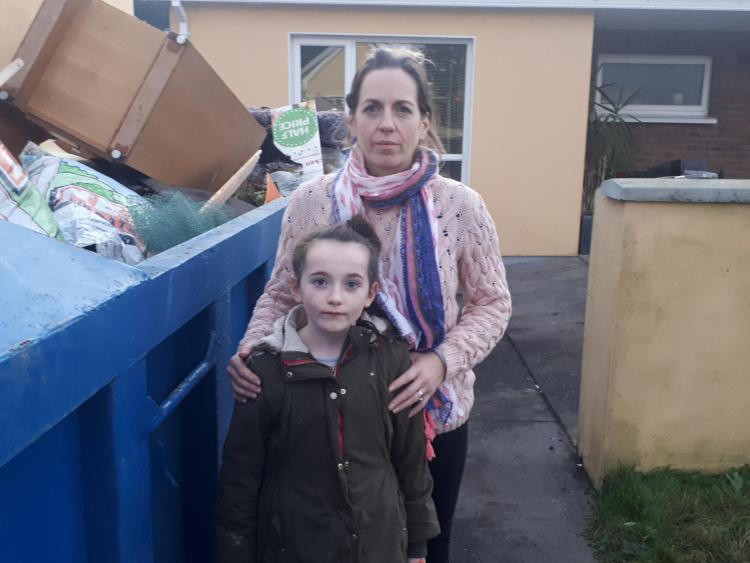 Mountmellick homes and businesses are this weekend trying to strip out the damage from their homes, filling skips provided by Laois County Council.

On the corner of O'Moore Street, homeowner Sylvia Statesbury had to throw away a new roll of carpet she had just bought, still in its plastic packing, that she couldn't save from the deluge that hit her home.

"Today we are removing carpets, skirting boards, floorboards, our electrical items like the diswasher, dryer, washing machine, fridge, all gone. Basically we are trying to get rid of the horrendous smell," she said.

The water rose to about 7 inches in her house.

"It came in through the conservatory, and up through the pipes, the washing machine filled with it, it poured it into the kitchen, it flooded my sitting room and flowed through the house out the front door. We had to leave the door open but the cars passing were swooshing water into the house," said Sylvia, who cares for her sick husband at home.

She feels lucky that she has a two storey house, and had spent hours desperately moving as much as she could upstairs during the flood. Now she is attempting to salvage her possessions.

"I lost power in all the plugs and in my oil heating pump. Hours later they all started working again but I have to get them checked, I'm afraid of a fire," she said.

Below: Sylvia Statesbury in her front room, destroyed by floods. 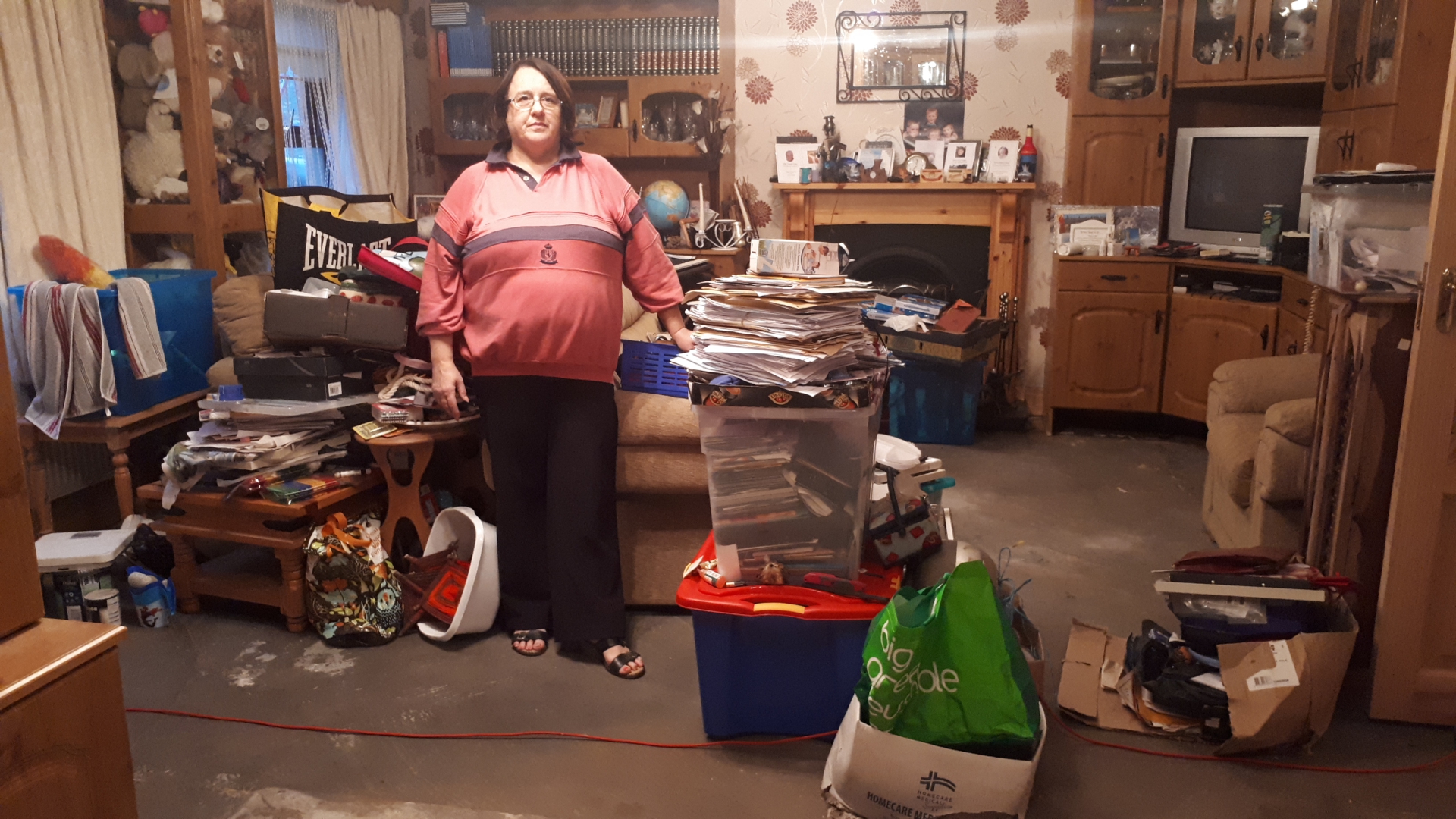 Sylvia feels lucky that she has insurance to help with costs, but others are in even worse circumstances.

On the corner of Manor road and Derrycloney, the beautiful bungalow home of Jacinta Bracken and her sons Conor, Niall and Adam, could not get cover because of its proximity to two rivers.

They have had to rip up almost every wooden floor and all the skirting, estimating the replacement cost of floors alone at €14,000.  The piles of stuff outside the house includes a desk Conor bought just last week to start a course in Carlow IT.

"We are hoping to get the humanitarian aid. The water came up through the floor and flooded everything, furniture clothes, everything is destroyed," said Conor.

He is worried for his mother, who works as a carer.

"I don't think it is fully hitting her. I don't know how we will pay for it," he said.

His mother had rescued the elderly lady she cares for, from that woman's Derrycloney home earlier on Wednesday. Hours later they both had to be rescued in a boat by the Civil Defence, when Jacinta's house also flooded.

"By the time I got home it was waist high in the driveway," said her son. 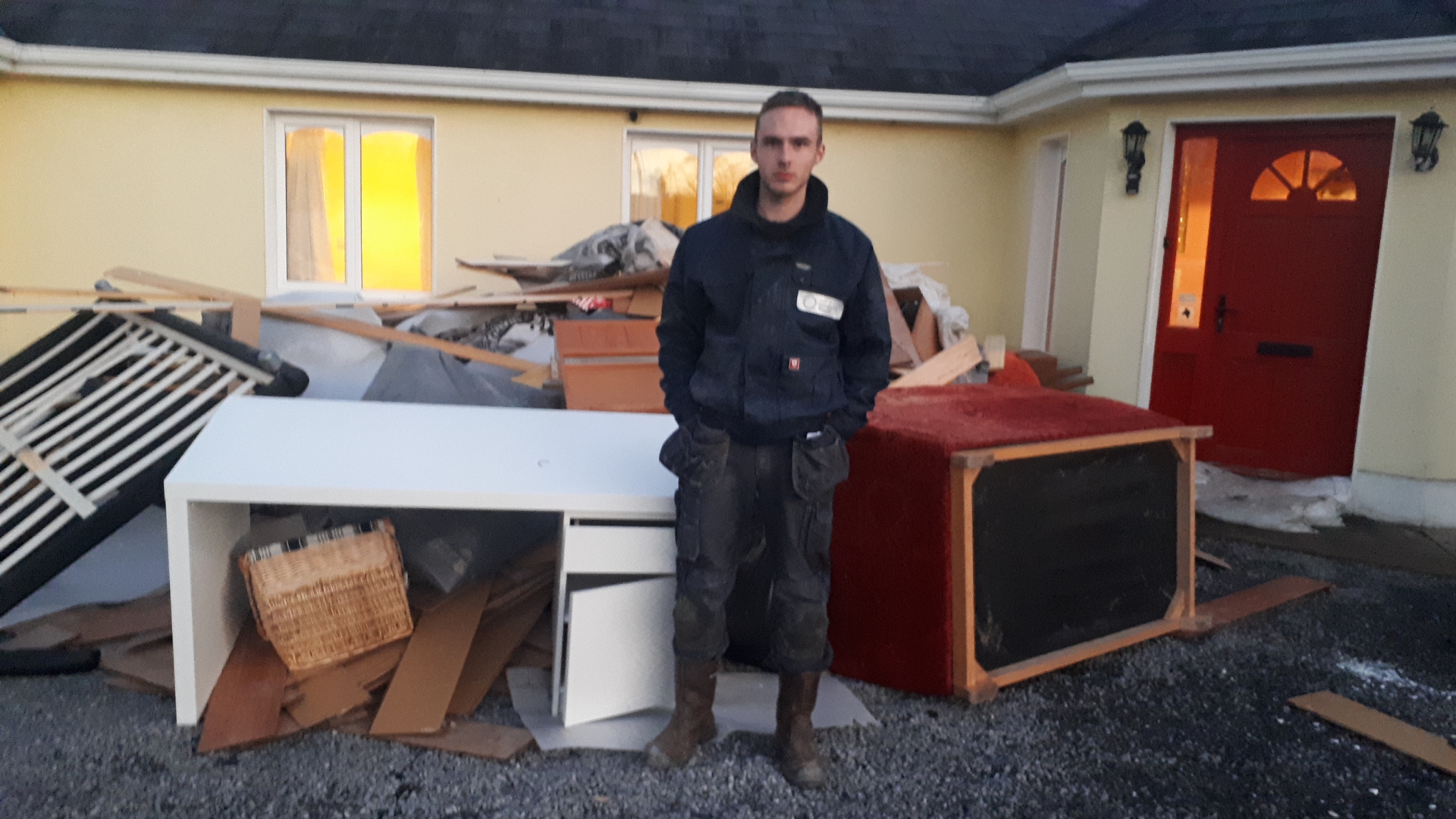 In Manor Court, Emmet and Elaine Conroy are also in the midst of stripping wooden floors from their bungalow, also losing their couch and several beds.

"We have been overwhelmed by help from neighbours and family, I'm lost for words. All our floors went, I tried to get up as much as I could, I had come home for lunch and the water was outside but in the space of 20 minutes it was in my door," Elaine said.

They have had insurance assessors out but have no idea how long it will take to return to normal.

"Someone has very kindly offered us a house to stay in free, out of good will. I'm almost ashamed to take the help, I know it's offered in good nature, but it's hard taking it. And it's the fear of this happening again," she said.

For now the family of four, like others are staying in the Maldron hotel.

Daughter Lily is looking on the bright side.

"It's nice there, we're going swimming tomorrow," she said.